“We are of course hurt, but we did not compromise.” 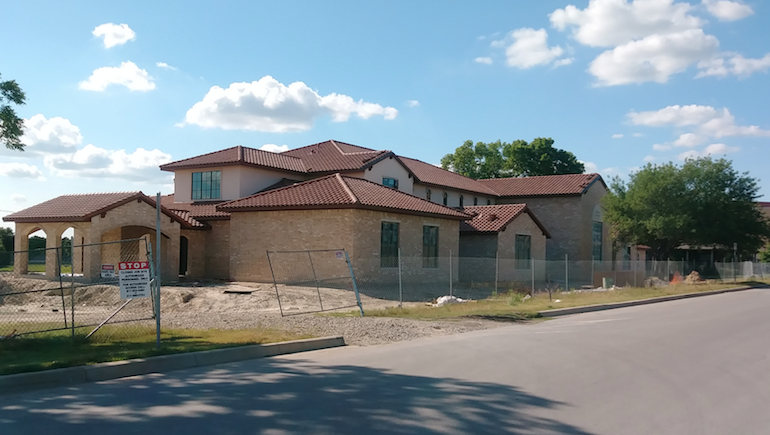 As we discussed in our previous post, the trustees of Southwestern Baptist Theological Seminary (SWBTS) deliberated for 13 long hours regarding the fate of Paige Patterson, who has served as seminary president since 2003. They decided to send him packing, but he won’t be going very far. As president emeritus, he and Dorothy will be moving from Pecan Manor to the new digs being built on campus (see photo above).

Patterson’s retirement plans were announced nearly four months ago in an article published by Southern Baptist Texan. The Baptist Heritage Center, a $2.5 million facility designed to house ‘the largest collection of conservative resurgence material’ (we presume in the world), will also serve as Paige and Dorothy Patterson’s residence. According to the article:

‘Patterson plans to live in one of the one-bedroom apartments in the center, along with this wife—after his retirement—until they could no longer take care of themselves.”

In that way it “would give me access to my own library to write,” Patterson said, explaining the trustees “kindly said, ‘Yes.’”

It goes on to state that:

In September 2017, the SWBTS trustee executive committee extended an official invitation for the Pattersons to reside in the Baptist Heritage Center as its first theologians-in-residence.

Although the Baptist Heritage Center is slated to open in fall of 2018, it is hoped that messengers attending the SBC annual gathering next month in nearby Dallas will be able to tour the facility. If that does happen, we hope some of our readers who attend the SBC gathering will let us know how it goes…

After the trustees’ announced their decision regarding Paige Patterson, he appeared to dig in his heels. Baptist News Global shared Patterson’s remarks. (see below)

“We are of course hurt, but we did not compromise,” Paige and Dorothy Patterson said in an email hours after Tuesday’s marathon trustee meeting precipitated by a backlash to his previous comments about women. “What matters in all this is not the lives of a couple of old soldiers, but your bright futures for Christ.”

Patterson has previously apologized for once counseling a woman to stay with an abusive husband and sexual innuendo in a sermon illustration involving a minor, but he also contends there is a campaign against him.

As Dee revealed in a previous post, while the SWBTS trustees were behind closed doors determining Patterson’s fate, news broke about a former student who claimed that back in 2003, when Patterson was president of the seminary she attended (SEBTS), he urged her not to report to the authorities that she had been raped.

On the heels of this breaking news, another woman reported via Facebook that she had experienced something similar. Baptist News Global shared the following information regarding that woman’s claim:

Megan Cox, a pastoral counselor in Denver who runs a non-profit to help women fleeing an abusive spouse, said she first went to campus officials to report what she knew about abuse happening to a friend.

Cox said a seminary official told her “this happens all the time” and said casually “there is nothing we can do,” even though the man was studying to be a pastor.

Cox said she called the same counselor many times about her own non-physical abuse by her then-husband, a seminary student, and he advised her to be more active in bed. Eventually, when “things began to get physical” she packed up their four kids and left.

“Paige Patterson’s teaching and support of the good ole’ boy system has hurt so many more women than I could count,” she said, encouraging the Post reporter to “keep on digging” into the story.

As a Facebook friend of Megan Cox, I (Deb) read her FB post shortly after she posted it. And providentially, Dee and I had the privilege of meeting Megan several years ago and hearing her story first hand. We can testify that Megan is a courageous woman with the gift of ministering to women who have been hurt by their significant others.

As Megan explained, she believes Patterson’s teaching has contributed to the abuse of women – physically, emotionally and/or spiritually. When men have pounded into their brains that they are to be the AUTHORITY in the home, some take said authority to an extreme. Yes, leaders like Patterson will tell husbands that they are to model Christ, but for certain men that edict falls on deaf ears. All they hear is that being ‘in charge is their God-given authority.

Lest you think this is only a problem at seminaries where Paige Patterson has led, let’s take a look at a couple of men who have been affiliated with the SBC’s flagship institution – Southern Seminary.

Russell Moore who for years was Al Mohler’s right-hand man, has made public pronouncements that he prefers the term “patriarchy” over “complementarianism”. In a 2006 publication entitled “After Patriarchy, What? Why Evangelicals are winning the Gender Debate”,  Moore wrote:

Authentic Christian patriarchy also has immediate implications for the welfare of the family. There is a growing trend among the weaker segment of complementarians to seek to indict complementarianism for not writing more on the issue of spousal abuse. On the one hand, the charge is a red herring, since complementarian evangelicals speak to the issue all the time. On the other hand, the charge itself reveals a tacit acceptance of a fallacious egal- itarian charge: that male headship leads to abuse.

Moore goes on to contend:

Ironically, a more patriarchal complementarianism will resonate among a generation seeking stability in a family-fractured Western culture in ways that soft-bellied big-tent complementarianism never can. And it also will address the needs of hurting women and children far better, because it is rooted in the primary biblical means for protecting women and children: call- ing men to responsibility. Soft patriarchy is, in one sense, a reaffirmation of what gender traditionalists have known all along—male headship is not about male privilege. Patriarchy is good for women, good for children, and good for families.

What is absolutely stunning is that Russell Moore holds up C.J. Mahaney and Sovereign Grace Ministries as models of male headship that are to be emulated. He states:

It is noteworthy that the vitality in evangelical complementarianism right now is among those who are willing to speak directly to the implications and meaning of male headship—and who are not embarrassed to use terms such as “male headship.” This vitality is found in specific ecclesial communities— among sectors within the Southern Baptist Convention, the Presbyterian Church in America, the charismatic Calvinists of C. J. Mahaney’s “sovereign grace” network…

Given what we now know about Sovereign Grace  Churches, Moore’s words are frightening!

To hear Russell Moore discuss his views, check out this 9Marks interview from 2007. Highlights from the interview are:

Again, Dever, Moore, and gang stress headship and don’t spend much time explaining how a husband is to model Jesus Christ. They are tickling the ears of men with terms like ‘patriarchy’ and ‘headship’.

Then there’s Bruce Ware, a professor at Southern Seminary, who is enamored with male headship. A decade ago Ware spoke on “Biblical Manhood and Womanhood” at a Denton Bible Church conference. You can listen to his hour-long message by clicking here.

Kate Johnson, who at the time was president of the Christian Coalition Against Domestic Abuse, took issue with Ware’s talk. You can read here remarks here.

We have known about Bruce Ware for nearly a decade, and we are VERY concerned about what he’s teaching regarding gender roles at SBTS. We discussed his remarks not long after we launched our blog.

Denny Burk claims Ware’s words are being misunderstood, but you be the judge.

It’s been nearly 40 years since the Conservative Resurgence began, and things certainly appear to be heading in the wrong direction for the Southern Baptist Convention. Church membership is in decline, baptisms are falling, and women who have been abused are coming out of the woodwork, not to mention pastors and seminary professors who are demonstrating their fallenness to a watching world. There is much confusion about male headship, and when one looks at what leaders like Paige Patterson and his ilk have said and done, is it any wonder that there are serious problems among their followers?