“It’s always better for Southern Baptists when we have several good candidates” for convention president “because it gives us an opportunity to exercise our congregational polity” and discern the Holy Spirit’s leading “in a corporate context”. 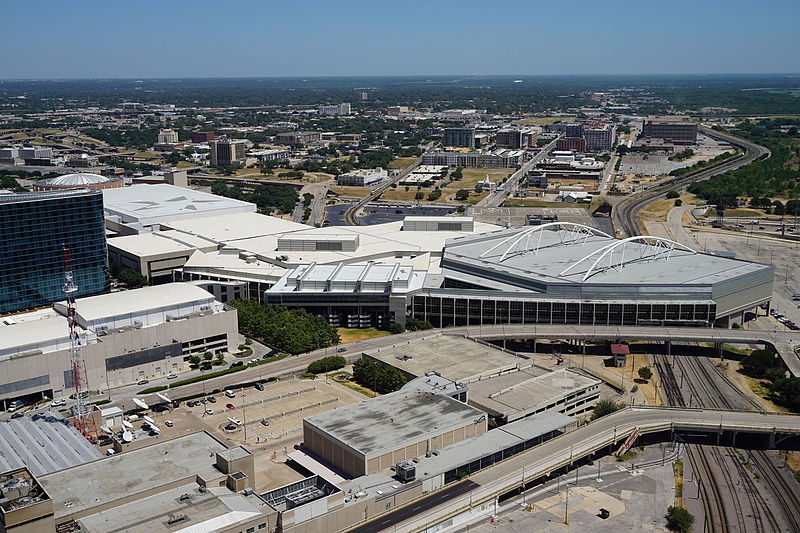 Next month Southern Baptist messengers will gather in Dallas to conduct business at their annual gathering. The two-day event will begin bright and early on June 12th at the Kay Bailey Hutchinson Convention Center (pictured above). No doubt the #MeToo #ChurchToo Movement will be discussed, and it will be interesting to see whether Paige Patterson delivers the keynote address, as planned months and months ago.

As emotionally charged as these topics are, they likely will not compare to what may happen when Southern Baptists elect their new president. You may recall that two years ago the presidential race was so close that ballots had to be cast twice and there was still no clear winner! The nominees were Steve Gaines and J.D. Greear.

An article in Christianity Today provides the details of what happened (see excerpt below).

In an unusually contested race, Southern Baptist messengers elected Tennessee pastor Steve Gaines as their next president this morning….

The SBC actually meant to elect a new president yesterday. But a rare tight race between the top two out of three candidates—North Carolina pastor J. D. Greear (45%) and Gaines (44%)—led to a runoff vote. (A candidate must receive just over 50 percent of the vote to win.)

Yesterday’s runoff vote was also too close to call, with Gaines receiving 49.96 percent of the votes and Greear receiving 47.8 percent. (More than 100 ballots were disqualified, yet were included in the determination of the total number of votes needed for a victory.)

This morning, in a surprise move, Greear pulled out.

Steve Gaines, who succeeded Adrian Rogers at Bellevue Baptist Church, has served as SBC president an additional year, as seems to be the denomination’s norm. His term is almost up, and another president will be elected.

In late January 2018, it was announced that J.D. Greear will run for SBC president once again. Here’s how the Baptist Press reported the news:

Greear, 44, “is all about what Southern Baptists have been all about,” Whitten, pastor of Idlewild Baptist Church in Lutz, Fla., told Baptist Press in relaying his intention to nominate Greear during the SBC annual meeting June 12-13 in Dallas. “We bleed missions. We bleed evangelism, and we bleed the Gospel of Jesus Christ … J.D. Greear will give us the opportunity to impact another generation while continuing to honor the former generation of Southern Baptists.”

At the 2016 SBC annual meeting in St. Louis, neither Greear nor current SBC president Steve Gaines received a majority of votes on the first or second ballot for president. So Greear, pastor of The Summit Church in Raleigh-Durham, N.C., withdrew his candidacy and moved that the convention elect Gaines, pastor of Bellevue Baptist Church in Cordova, Tenn., on the third ballot.

The day after the news broke about his nomination, Greear posted an explanation on his website — Why I’m Accepting the Nomination for SBC President.

Dee and I wondered whether J.D. would run uncontested, as Fred Luter had done six years ago.

A couple days later another name was placed into nomination for SBC president — Ken Hemphill. Here is how the Baptist Press broke the news:

Ken Hemphill, an administrator at North Greenville University and a former Southern Baptist Convention seminary president, will be nominated for SBC president, a coalition of Southern Baptists announced today (Feb. 1) via a Baptist state paper.

“We desire to elect a man who is a Southern Baptist through and through, values our understanding of the Gospel, and, has an established record of affirming the cooperative work of our local churches through the associations, state conventions and national entities,” Louisiana Baptist Convention executive director David Hankins said according to the state’s Baptist Message newsjournal.

“We sought Ken out because of his record in these areas as well as his impeccable character, remarkable breadth of experience in Southern Baptist life, passion for missions and evangelism, and an active ministry of revitalization to pastors and churches,” Hankins said.

Hemphill noted he is not “running against” any other candidate.

“It’s always better for Southern Baptists when we have several good candidates” for convention president “because it gives us an opportunity to exercise our congregational polity” and discern the Holy Spirit’s leading “in a corporate context,” Hemphill said.

So what are the differences between these two Baptist men? A post at onenewsnow.com gives a little bit of insight. (See below)

Southern Baptist “messengers” will choose between Dr. J.D. Greear, a 45-year-old North Carolina pastor who ran a close race two years ago and eventually dropped out to avoid a convention fight; and Dr. Ken Hemphill, who currently is the interim pastor at a church in Missouri. Dr. Hemphill, 70, has been in Southern Baptist leadership for decades, as president of Southwestern Baptist Theological Seminary and a national strategist out of Nashville until 2011.

And while many in Southern Baptist circles are working hard to get their preferred candidate elected, Hemphill and Greear both say they aren’t in competition with each other. “J.D. and I are friends, and we both agreed that we would not in any way criticize the other person – and I think we’ve both been faithful to that,” says Hemphill.

Dr. J.D. Greear of The Summit Church in North Carolina may have the upper hand, according to Southern Baptist megachurch pastor Dr. Robert Jeffress.

“I think J.D. Greear may have a little bit of an edge … simply because during the last election, when it was a tie vote, he graciously stepped aside so as not to cause any controversy,” Jeffress, the pastor of First Baptist Dallas, recalls.

Dr. Ken Hemphill has been in Southern Baptist leadership for years, including serving on the SBC Board and as president of Southwestern Baptist Theological Seminary.

“Both men who have been announced as candidates are friends of mine, JD Greear and also Ken Hemphill,” Jeffress continues. “[They’re] both respected within the Convention and either one would be a tremendous leader.”

Whoever ends up filling the position is expected to address a slow but relatively long-term decline in membership. Both Greear and Hemphill have spoken out in favor of church planting and evangelism. The incoming SBC president will also continue addressing racial reconciliation issues – once a blemish on the denomination’s record that has been the focus of leadership for years now.

As a Southern Baptist, I know that what makes the SBC presidency so important is that the one elected to the top post has important nominating privileges, and those put in charge will determine the course of the convention for years to come.

Two years ago SBC messengers were faced with the challenge of electing someone more traditional in his approach to soteriology (Gaines) or someone who was more Calvinistic/Reformed in his soteriology (Greear).

Over the next few weeks, I plan to put together some information that I believe will be helpful to Southern Baptist messengers who will be casting their votes for the next SBC president.