“I want the experience of the conference to be the deep edification of pastors through preaching, singing, praying, conversation, laughter, food, and buying as many books as one’s credit card allows, all for the glory of God.”

“Brother on behalf of all over-educated preachers (and especially myself), I want to thank God publicly for your Bunyan-like skill at preaching so as to touch the heart.”

Today the seats pictured above filled with 12,000 true believers who have flocked to the KFC Yum! Center in Louisville for the bi-annual Together for the Gospel conference. It’s the seventh such gathering, with the first one taking place back in 2006. The inaugural event was held in a large banquet room at the Galt House Hotel in Louisville. Some estimate the number of attendees at T4G 2006 was around 2,000. Check out these photos from that first event.

In case you don’t know about the history of Together for the Gospel, here is some info. provided by the T4G organizers. It begins as follows: (see screen shot below).

In case you’re wondering how those four pastors (Al Mohler, Mark Dever, Ligon Duncan, and C.J. Mahaney) developed such strong friendships, it was Dever who first sought out Mahaney. When he and an intern stopped by Covenant Life Church in 1996 (or so), Mahaney was not available. During a visit to Washington, D.C., C.J. stopped by Capitol Hill Baptist Church to meet Dever. As Ligon Duncan once revealed on the T4G website, it was Dever who introduced Mahaney to his good buddies Mohler and Duncan. (Dever, Mohler, and Duncan has been friends for decades, probably going back to their college days).

When Mahaney had been involved with Take and Give (TAG), he and Larry Tomczak taught a Bible study each week to thousands of students who gathered in D.C. Mahaney got used to being in front of large crowds and no doubt LOVED IT! As time went on, these two leaders established a church (called the Gathering of Believers, which would later become Covenant Life Church) as well as a church planting organization called People of Destiny, which was later shortened to PDI (eventually it became Sovereign Grace Ministries and then Sovereign Grace Churches).

Mahaney/PDI held an annual leadership conference for pastors, which probably began around the time that the Gathering of Believers was established. In 2001, Mark Dever spoke at this conference. It was held for the same length of time as T4G (approx. 2-1/2 days). (see screen shot below) 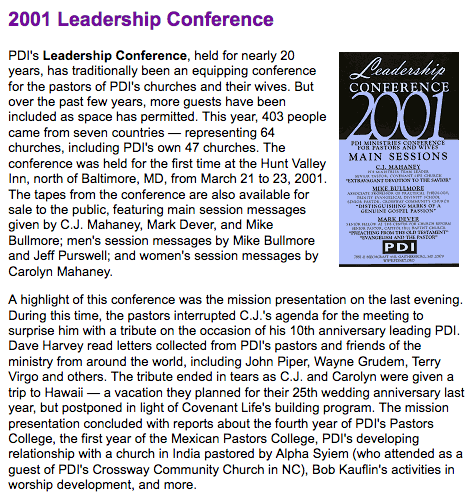 As you can see, Mahaney has been friends with John Piper and Wayne Grudem for a long time. Don’t miss what happened at the end of this tribute to Mahaney — the presentation of a trip to Hawaii to C.J. and his wife Carolyn. (Remember, there would be another tribute to Mahaney three years later when he passed the pastoral baton to Joshua Harris). 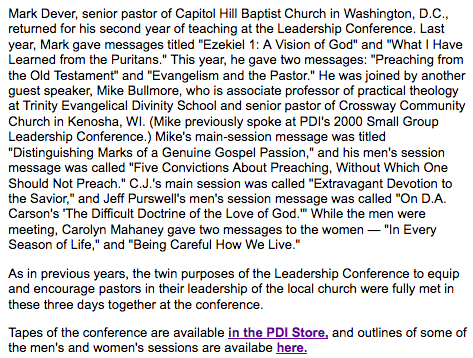 We believe it was in 2002 that PDI became “Sovereign Grace Ministries”.

As an aside, it was not long after Mahaney and Dever became friends that PDI changed the name of its magazine to “Sovereign Grace”. (see screen shot below) 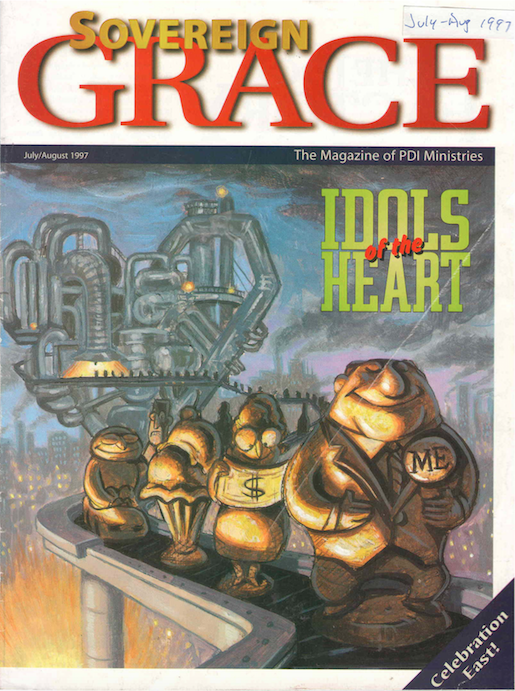 Here was the explanation for the name change (see screen shot below). 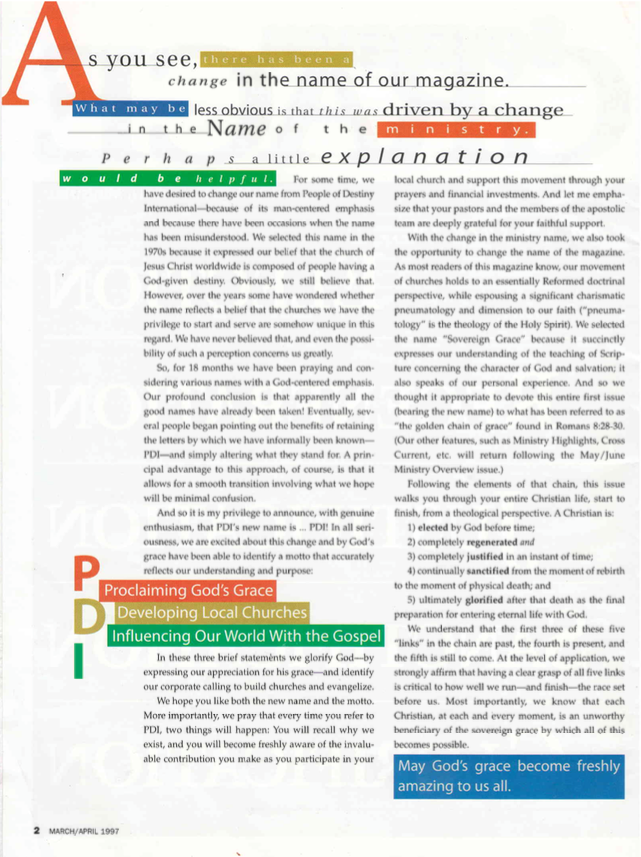 Around the time that the name changed to “Sovereign Grace Ministries”, SGM and Mahaney began making annual contributions to Southern Seminary, unbeknownst to the vast majority of folks in SGM. We wrote about it in The Mahaney Money Machine. Why in the world would this independent church-planting organization be giving money to a Southern Baptist seminary? I now believe it had something to do with the establishment of T4G a few years later.

In 2005 Mahaney spoke at the newly established Resolved Conference (and every subsequent one until it ended seven years later) as well as the “Together on a Mission” conference which took place ‘across the pond’. Early in our blogging, we shared some ideas about Mahaney’s involvement in this conference – Together on a Mission or Together for the Gospel?

So in 2006 Together for the Gospel was launched by the Fab Four (Mahaney, Mohler, Dever, and Duncan).  Here are Mahaney and Dever ‘back in the day’. 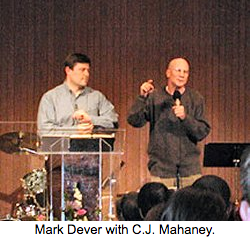 A few weeks after the very first T4G, Mark Dever wrote this message to C.J.

It must have been difficult for Dever and gang to go forward with T4G 2014 without their buddy C.J., who withdrew because of a class action lawsuit that named him and others. Yet, Mahaney was there rubbing elbows with them in the front row. 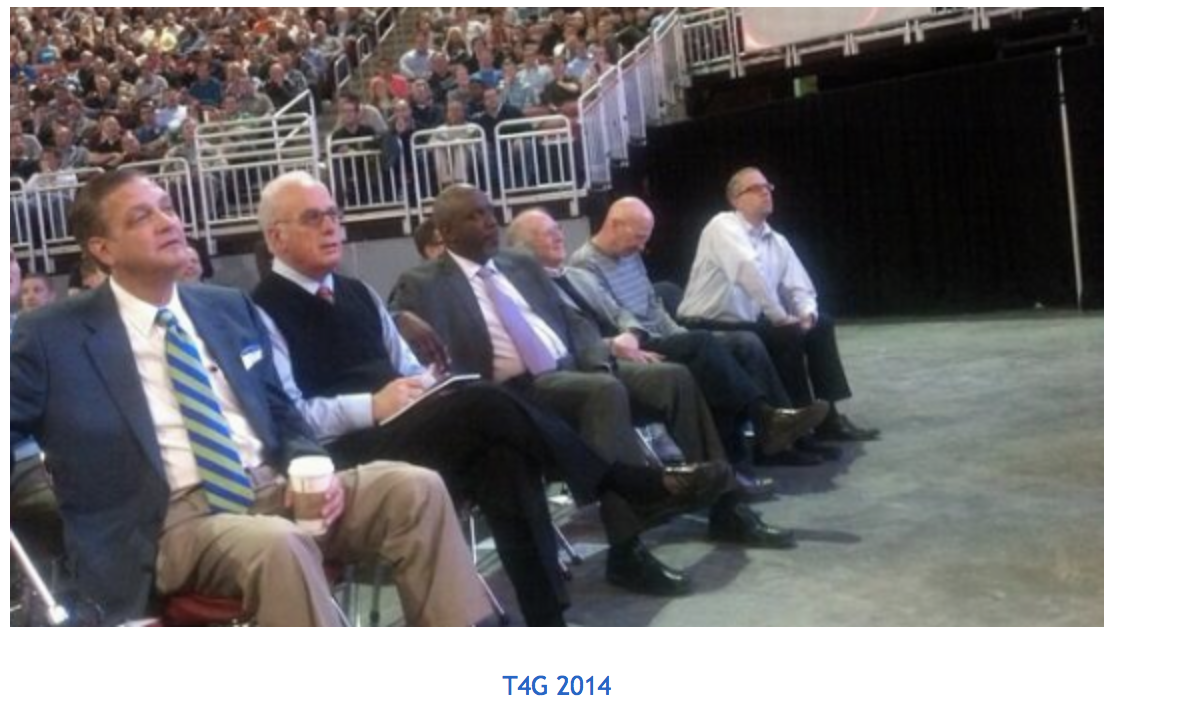 Two years later Mahaney spoke at T4G 2016. Al Mohler demonstrated an extreme lack of judgment in how he introduced C.J. Dee wrote an excellent post about it – Al Mohler Extolls CJ Mahaney at T4G While Joking at the Expense of SGM Victims. Does Money Play a Role in the Relationship?

Mahaney had planned to speak at this year’s T4G. Then Rachael Denhollander happened… She began calling out Sovereign Grace Churches (formerly Sovereign Grace Ministries – yet another name change!) and requesting that they conduct an independent investigation.

In short order, Mahaney announced that he would not be speaking at this year’s T4G. You can read his statement here (we featured it on our blog just in case it disappears).

A month ago I wrote a follow-up post – Mahaney Withdraws from T4G Line-Up and Rachael Denhollander Responds.

Even though C.J. Mahaney will not be in the speaker line-up, Sovereign Grace Churches still has a presence at this year’s T4G. The three men pictured below will be promoting their church-planting network to the 12,000 attendees. (see screen shot below)

As we wrap up this post, we have some questions…

No doubt there are other questions we could ask. What questions do you have regarding Together for the Gospel?