“Given the recent, renewed controversy surrounding Sovereign Grace Churches and me individually, I have decided to withdraw from the 2018 T4G conference. No one should interpret my withdrawal as an acknowledgment of guilt.” 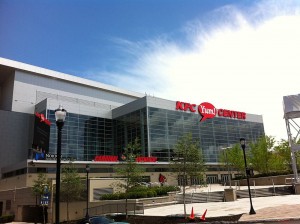 In just a month’s time, T4G2018 will be well underway at the KFC Yum! Center in Louisville, Kentucky, Ground Zero for New Calvinism (aka the Young, Restless and Reformed Movement). In case you’re not familiar with the acronym T4G, it stands for “Together for the Gospel”. According to the T4G website, here is how this conference began (see screen shot below).

One of those four pastors – C.J. Mahaney – has come under scrutiny in recent years. Four years ago C.J. withdrew from the speaker line-up because he had been named in a class action lawsuit. This news report which aired back then provides some insight into what the lawsuit entailed.

The lawsuit against C.J. Mahaney, et al was dismissed due to technicalities (the statute of limitations had expired for most of the plaintiffs, and two of the plaintiffs filed in the wrong jurisdiction).

In case you’re not familiar with Mahaney and the controversy surrounding him, we recommend an article that was published two years ago in The Washingtonian entitled The Sex Scandal Abuse Scandal That Devastated a Suburban Megachurch: Inside the rise and fall of Sovereign Grace Ministries.

When this biennial conference took place in 2016, Al Mohler introduced his buddy C.J. We found his commentary to be highly inappropriate, and Dee wrote about it in a post entitled: Al Mohler Extolls C.J. Mahaney at T4G While Joking at the Expense of SGM Victims. Does Money Play a Role in the Relationship?

Here is the trailer for the upcoming Together for the Gospel Conference (the seventh one to be held).

In God’s providence, another individual has recently come forward to challenge the powers that be in T4G, namely Rachael Denhollander, the first victim to go public with her allegations of sexual abuse against Larry Nassar. We have been covering her challenge of Sovereign Grace Churches (formerly Sovereign Grace Ministries) to undergo an independent investigation regarding its handling of sexual and domestic violence allegations. It appears that her very public challenge of SGC was a major factor for Mahaney being removed from the speaker line-up at T4G2018. We shared his statement last week soon after it was announced on the T4G website. Christianity Today reported on this development, as did Baptist News Global.

Not long after Mahaney made this announcement, Rachael Denhollander responded on Facebook, saying she was ‘grieved’ that C.J. is stepping down as a speaker at T4G. She went on to state that she is grieved for two reasons: (see below)

1. It is unnecessary if, in fact, there are answers to every credible allegation that has been raised of failing to properly handle and report sexual and domestic violence. If all those allegations and each concern raised regarding the credibility of the investigation into CJ’s former church, Covenant Life Church are false, then this should have been, and still should be, made known through an independent investigation.

2. If, in fact, those allegations are true and SGM has a significant and damaging problem regarding how they have handled sexual and domestic violence in their churches, then temporarily stepping down from a conference does not solve the problem. It seeks to avoid it.

Rachael Denhollander explains that she has not asked anyone to sit as ‘judge and jury’. Instead, she states that Christians should strive for transparency, accountability, and the pursuit of truth and right. Given that the theme of this year’s T4G is HOLINESS, Denhollander’s request seems highly appropriate.

Perhaps not surprisingly, the secular media has picked up on this development. It didn’t take long for Slate to report on Rachael Denhollander’s challenge to Sovereign Grace Churches. Here is an excerpt from that article:

The alleged cover-up of a pattern of child sexual abuse within a large Protestant network now called Sovereign Grace Churches has been a major story in American evangelicalism since 2012. That’s when a lawsuit was filed alleging a pattern of sexual and spiritual abuse within the network—and not just abuse itself, but pressure to “forgive” those actions, internal policies discouraging reports to law enforcement, and ostracism for families who refused to help cover up crimes. The suit was dismissed in 2014, but a former youth leader, Nathaniel Morales, was convicted in a separate case of abusing three boys. In an attempt to move on from the thorny and slow-moving scandal, Sovereign Grace tweaked its name, moved its headquarters from Maryland to Kentucky, and replaced several of its top leaders.

To many of its critics, the organization has not done enough to repent and atone for its sins. Founder C.J. Mahaney, meanwhile, left the organization in 2013 but has successfully fought to retain his status as a leader in evangelical circles. Denhollander has spent the last several weeks speaking up about the case in a series of interviews and detailed public statements. She calls it “one of the most well-documented cases of institutional cover-up I have ever seen.” This has led to a tense series of dueling statements and accusations closely watched by Christian media outlets. Thanks to Denhollander’s activism, Sovereign Grace has been forced to explain itself more deeply in the last few weeks than it has in the previous five years.

This week, Denhollander got results. Mahaney, the group’s former president, announced Wednesday that he is withdrawing from a major upcoming conference that attracts thousands of pastors and church leaders. “Given the recent, renewed controversy surrounding Sovereign Grace Churches and me individually, I have decided to withdraw from the 2018 T4G conference,” Mahaney said in a statement, adding that “No one should interpret my withdrawal as an acknowledgment of guilt.”

We can’t help but wonder whether Mahaney’s action was voluntary or if he was removed from the line-up by his colleagues. With an expected 12,000 attendees, T4G organizers can’t take any chances on something going wrong. There’s way too much at stake…

We leave you with a clip of Al Mohler honoring C.J. Mahaney less than two years before T4G held its first conference (2006). It was during 2004 that C.J. resigned as pastor of Covenant Life Church, a position he held for 27 years, and began devoting all of his time and attention to Sovereign Grace Ministries (as its president). It was also around this time that Mahaney began making signiicant contributions to Southern Seminary. Over the course of the next few years he and Sovereign Grace Ministries would donate in excess of $200,000 to Mohler’s seminary ($100,000+ from Mahaney personally and $100,000+ from SGM [now SGC]).

Finally, you might be interested to know that Rachael Denhollander will be in New York City tomorrow afternoon. Here are details that she provided on Facebook:

Keep up the great work Rachael!