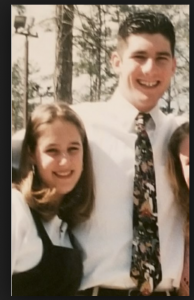 Jules Woodson and Andy Savage before the dark, dirt road.

This video has been just been released by the New York Times on their opinion page: I Was Assaulted. He Was Applauded. Jules Woodson was asked to go on the Ben Ferguson Show like Andy Savage. She was also asked by the New York Times to respond the standing ovation at Highpoint Church. She chose wisely. At the end, pay close attention to the despicable tweets that Jules received from members of Highpoint Church.

Watch Jules’ face and her words. Shame on: Andy Savage, Chris Conlee, Steve Bradley, and many members of highpoint Church. You have been exposed.

Prior the standing ovation, I tweeted that the church would do a standing ovation since it is a typical, knee jerk, ignorant attempt to manipulate people which is frequently used by abusive churches. I believe that this response was premeditated. Sadly, many unthinking people in the church were easily suckered into this phony show. One person who did not stand up and applaud said that those around him appeared irritated that he went against the grain. Maybe, deep down inside, they were a bit uncomfortable by their response?

That entire church service was shocking to me. Jules Woodson was abused by Andy Savage. She was then re-abused by the members and pastors of Highpoint Church. Instead of thoughtful words and a subdued service, indicating a minimum understanding of the gravity of the situation, the church leaders presented a raucous, circus-like show with an entertainer up front screaming that Andy Savage was *worthy.*

Savage received a standing ovation to his confession of a sexual incident with a 17 year old student in a youth ministry. Chris Conlee actually implied Jules Woodson should be on the same path to healing as Andy Savage! Seriously?. Do I really have to explain to pastors?

As I watched this mess, I wondered how a church could screw up this badly.

I was dumfounded by members of Highpoint who attacked Jules Woodson via Twitter, threatening her that they were going to expose her. Some daft lady say that she had the gift of *spiritual discernment* and that Savage was innocent of molestation. I saw dippy Scriptural *explanations* made by members who apparently don’t know the difference between a pastor and a king or  between crime, sin, repentance and restoration.

HighPoint got their city on a hill moment and it was a huge fail. They should hang their heads in shame. Sadly, the New York Times got it and Highpoint Church did not. The kindness exhibited by NYT team was greatly appreciated and stood in stark contrast to Highpoint Church.

Amy Smith and I were with Jules when she was filming. They had to stop the filming at times because Jules would cry and need a break. Amy and I put our arms around her and consoled her. Where were the arms of the Highpoint Church?

The church pulled the video offline, but not before The Times saved a copy. We then viewed it with Ms. Woodson, whose reactions and commentary we taped for the Op-Ed video above. She recoils at Highpoint’s head pastor’s carefully orchestrated introduction of Mr. Savage and at Mr. Savage’s use of Christian tenets like sin and redemption to characterize his behavior and to try to absolve himself.