“These allegations are serious. The evidence is credible and probative. This is not merely an intellectual exercise – people made in the image of God are being sorely wounded and our credibility and ability to speak truth is seriously undermined.” 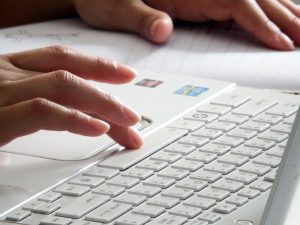 Two weeks have passed since Sovereign Grace Churches posted its response to Rachael Denhollander’s concerns about a possible sex abuse cover-up going back for decades. We wrote about their ill-timed statement here.

Yesterday WORLD Magazine featured an article about Rachael Denhollander entitled A time to speak. It recaps how Rachael went public about Larry Nassar, the physician for the U.S. Olympic Gymnastics Team who sexually abused hundreds of female gymnasts, including her. Nassar was recently sentenced to several lifetimes in prison. Thanks to Rachael’s courage, 156 women who were also victims of Larry Nassar came forward to confront him in court. That article ends with this (see screen shot below): 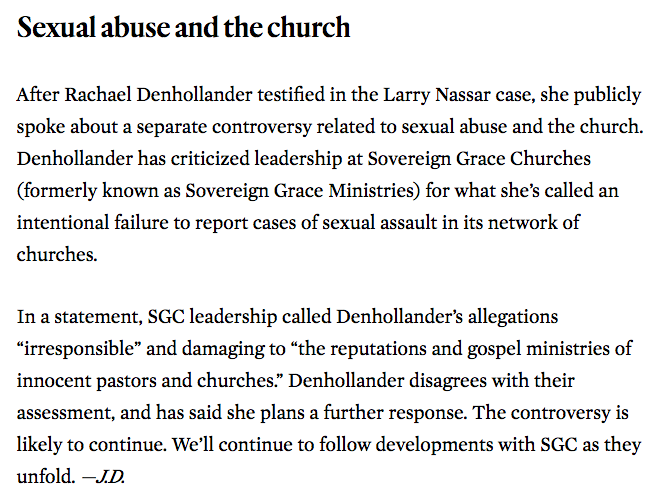 It didn’t take long for Denhollander to respond to SGC’s February 13th statement. Last evening she posted a lengthy statement on Facebook. She begins with this explanation (see excerpt below):

I have prayed and considered for nearly three weeks whether to respond to the statement by Sovereign Grace Churches posted on February 13th. This blog post is the most extensive statement by the organization with respect to serious questions that have been outstanding for nearly a decade. However, the response is misleading on several vital points, and leaves many disturbing questions unanswered. Because of this, I have chosen to respond in greater detail and renew my call for Sovereign Grace Churches (SGC, formerly Sovereign Grace Ministries (SGM)) to submit to an independent third-party review of how they have handled reports of abuse.

This call does not rise from a sort of Javert-like obsession with SGC, but from the knowledge that evangelical churches are plagued with serious problems related to how we respond to and counsel victims of sexual assault. In fact, experts have stated that both the amount of abuse, and the failure to report it, is likely worse than in the Roman Catholic Church – a religious organization often used by evangelicals as a byword for sexual assault scandals. Research bears out the claim these experts make. Because many churches are ideologically committed to the theories that lead them to handle abuse so poorly, many church leaders are very sincere, yet sincerely wrong. Sadly, these leaders and institutions also remain resistant to outside accountability or input. This is a serious problem that damages the gospel and pushes the most vulnerable away from hope and refuge. Addressing this issue is not damaging the Gospel, it is instead seeking to restore the Gospel and Christ to their rightful authority and priority over institutions and mishandled theology.

Rachael Denhollander then reveals that she began researching the “circumstances surrounding crimes committed at SGM churches and other allegations against the ministry seven years ago.” For the record, Dee and I began investigating SGM in the Fall of 2008.

Rachael explains that she was teaching worldview classes to high school students (presumably at her former church) and that she would sometimes recommend materials by C.J. Mahaney and Joshua Harris. Remember, her former pastor was a HUGE supporter of C.J. Mahaney.

When charges against Sovereign Grace Ministries began to surface in 2011, she took responsibility and began investigating the ministry and its leadership. Here is the background information Rachael provided in her lengthy Facebook statement: (see excerpt below)

I began researching the circumstances surrounding crimes committed at SGM churches and other allegations against the ministry seven years ago. At that time, I taught worldview classes to high school students and I would sometimes recommend material by Sovereign Grace Ministries, including CJ Mahaney and Josh Harris. I considered it imperative that I consider any credible charges that could disqualify a leader or organization from receiving my endorsement. Thus, when the concerns and charges against CJ Mahaney and SGM began to surface in 2011 and grew in both scope and seriousness, I carefully researched these developments. I hoped that this ministry, which I had long supported, would be found guiltless or, in the case of wrongdoing or mishandling, would confess their failings and make things right. I have now researched this situation for seven years. My research has consisted of the following:

1. Reading all available legal documents, including police reports and trial transcripts where available.

2. Reading every available statement by SGM and SGM pastors or leaders, as well as those who have publicly defended them.

3. Speaking with investigative journalists to verify their process, methodology and first-hand witness to each document or source cited.

4. Speaking firsthand with numerous abuse survivors from the civil lawsuit, including victims of convicted abusers, known abusers who were not convicted, and alleged abusers.

5. Speaking firsthand with numerous survivors of convicted or known abusers within SGM churches who were not part of the civil lawsuit.

6. Speaking firsthand with witnesses directly involved in some of these events, including former leaders and some former pastors.

7. Personally reviewing documents given to me by survivors and witnesses, including email chains between survivors or witnesses and various SGM pastors and leaders.

8. Speaking firsthand with supporters of SGC in a variety of SGC churches. Notably, almost every person I spoke to had been specifically instructed by their elders to not read news reports, survivor statements, or review any evidence. These individuals supported their pastor’s counsel to not view the evidence and had no counter-evidence to offer.

9. Reviewing internal documents and recordings of SGM and CLC.

10. Familiarizing myself with leaders who influenced the early pastors within SGM as well as reading early materials from SGM authors.

I do not claim, and have never claimed, “absolute moral authority” in this case. I do not pretend to have every fact, which is why I have repeatedly called for an independent third-party review. However, SGC’s public characterization of me as having “zeal without knowledge,” of publicly condemning them “without the facts,” of carelessly promulgating “false allegations” is itself a false statement about me, given without any direct knowledge of me or what I had done to research. As a trained attorney, I am well aware of the difference between mere allegation and what is considered probative. I am also well aware of the devastation caused by false accusations, having personally walked through this pain with those I know and love.

Moreover, as a victim advocate and a follower of Christ, I am acutely aware that lack of precision and good methodology will do untold damage to those I love the most – victims, fellow Christians, and most of all, my Savior. I do not speak out of careless disregard for the damage being done to his name or the Gospel. Rather, it is concern for the Gospel of Jesus Christ and his church that motivates me and countless others to call for these concerns to be taken seriously, and subjected to an open and transparent investigation by a qualified and trusted organization.

Rachael Denhollander is a trained attorney, and we are most impressed with her thorough analysis of Sovereign Grace Ministries. We hope you will take the time to read her detailed Facebook statement. It is obvious that she put considerable time and thought into this analysis.

Finally, please pray for Rachael as she continues to confront the leadership of Sovereign Grace Churches and hold them to account.