“Between now and March 11, the elders are respectfully asking every Covenant Life member to either reaffirm your membership, let us know you are moving on, or indicate you would like to discuss this with an elder.” 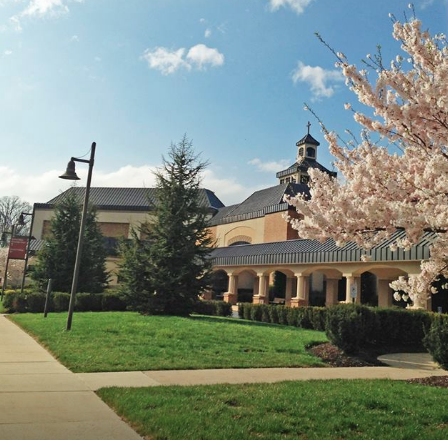 Change is a-comin’ once again at Covenant Life Church in Gaithersburg, Maryland. Earlier this month, the church filed for a new trademark – CHRIST CHURCH METRO (see screen shots below):

This congregation, which began in someone’s home back in 1977 (ed. 2/25/18, 9:00 a.m.), was first called “Gathering of Believers (GOB)”. Some years later the name changed to “Covenant Life Church (CLC)”. Now all indications point to yet another name change – Christ Church Metro.

Looks like the man who pastored this church for 27 years, C.J. Mahaney, was right about one thing. He was known for saying:  “Constant change is indeed here to stay.” Perhaps those who have remained in the congregation have become accustomed to ‘constant change’.

Once the name change takes place and CLC ceases to exist, the history of this congregation may disappear as well. In case that does happen, we have decided to preserve the church’s history in screen shots taken from the current website. (see below) 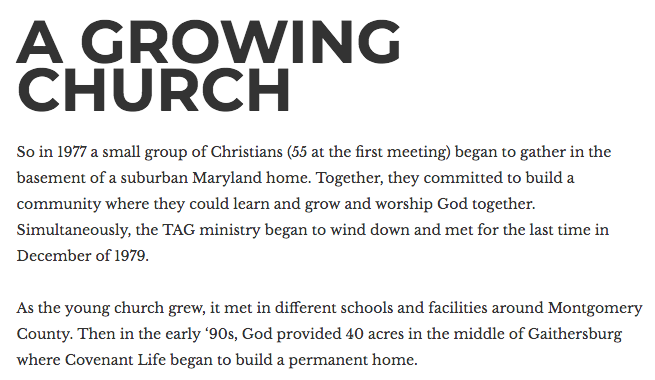 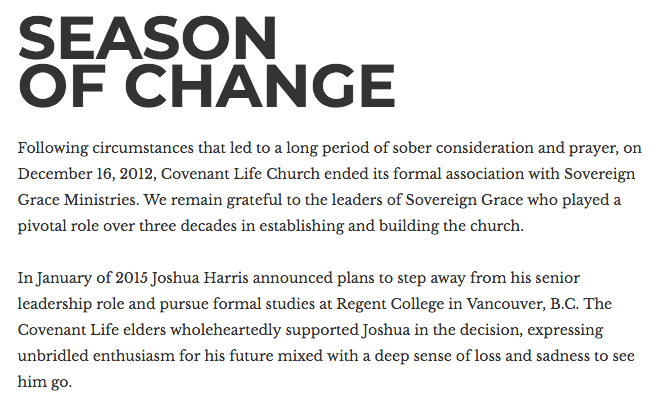 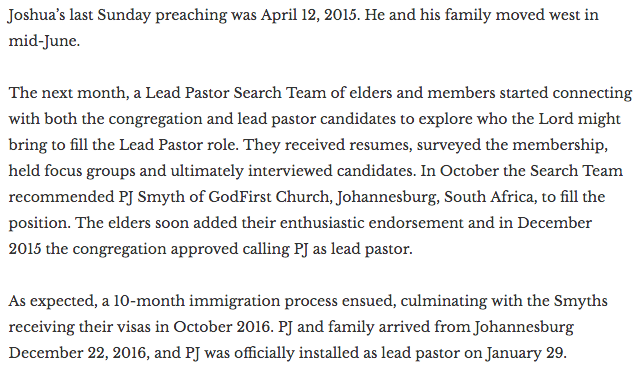 Never mind that the Take and Give Bible study mentioned at the beginning of CLC’s history was started by Lydia Little. Larry Tomczak and C.J. Mahaney took over the weekly meetings, and Lydia is given no credit whatsoever (as you can see above). Lydia died on August 25, 2016, and her passing was mentioned in The Washington Post under “Notable Deaths”. (see screen shot below) 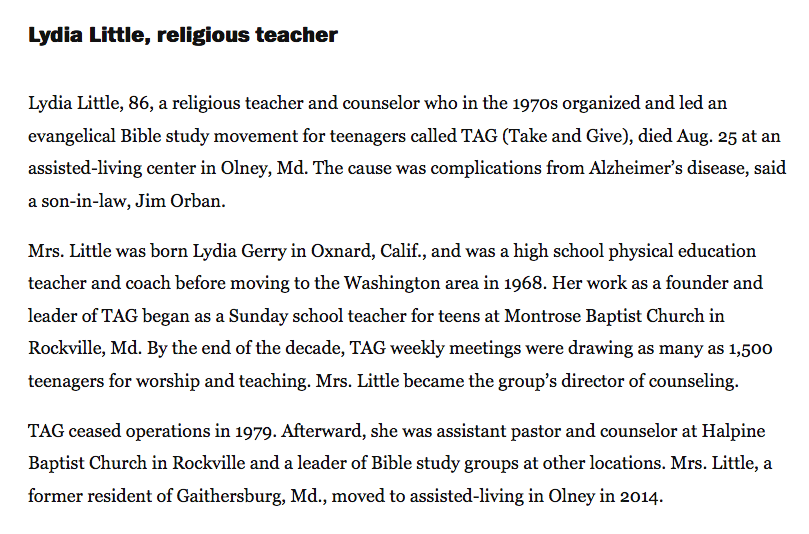 In addition to the likely name change, each member of the congregation has been asked to reaffirm his/her membership (see screen shots of correspondence below): 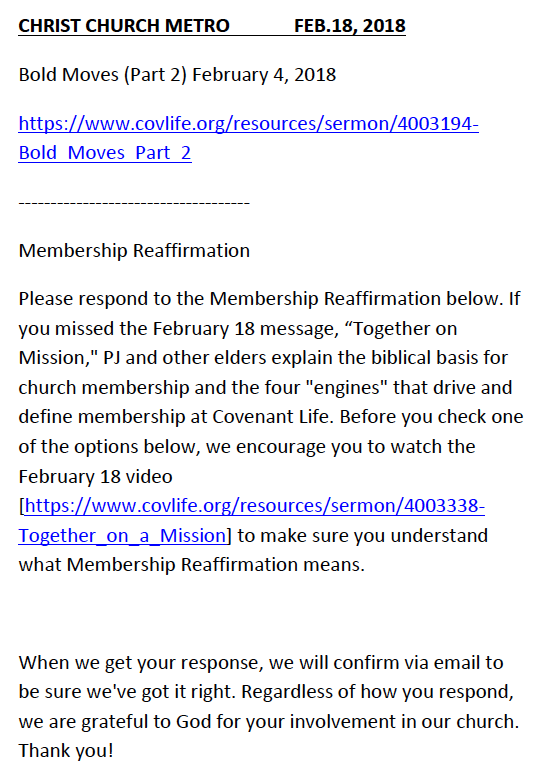 When you click on MEMBERSHIP REAFFIRMATION SURVEY, this is what appears: 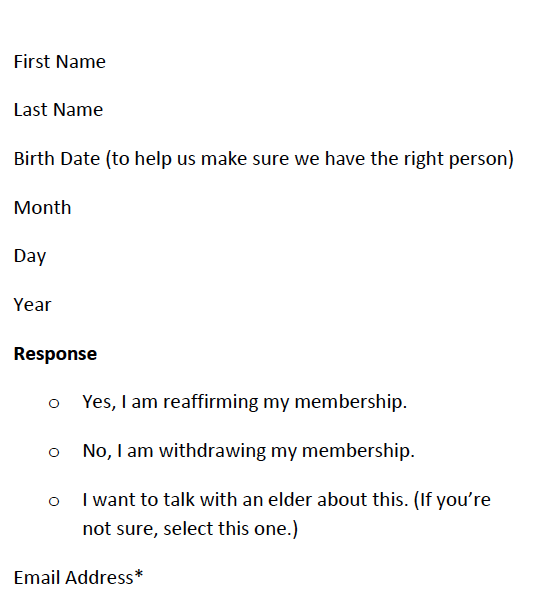 It will be interesting to see how many in the CLC congregation remain as members. Some of our readers will remember that Mark Driscoll pulled a similar stunt at Mars Hill Church, and it didn’t work out so well…

As I was preparing this post, I decided to take a look at the Wikipedia article about Covenant Life Church, which I haven’t seen in a while. I was shocked when I read the following (see screen shot below):

So the allegations of child sexual abuse at Covenant Life Church and/or Covenant Life School “likely never happened” at all, according to an independent investigator hired by CLC???

We have met with parents of some of the children who were abused, and we believe them.

UPDATE: (2/25/18, 9:00 a.m.) The above paragraph has been removed from the Wiki article. The pertinent section now reads: (see screen shot below)

One of the reasons we began this forum was to give a voice to those who have been abused, particularly in the church. With regard to Covenant Life Church, we absolutely believe Grant Layman, a former CLC pastor  and C.J. Mahaney’s brother-in-law, who testified under oath that reports of sexual abuse were handled in house instead of being turned over to the proper authorities.

A number of sources reported on Layman’s testimony in court, including The Washingtonian, which published a must-read article entitled The Sex Abuse Scandal that Devastated a Suburban Megachurch. That article included the following (see screen shot below):

Who to believe… Grant Layman (who testified under oath) or an independent investigator HIRED BY and PAID BY Covenant Life Church?

Folks, that’a a NO BRAINER! Remember the Ambassadors of Reconciliation, who were in the pockets of SGM leadership?

We continue to stand by the SGM victims who have suffered terrible abuse and have subsequently been re-victimized by their pastors and anyone else who refuses to believe them.

No doubt there will be more to report on the changes taking place at Covenant Life Church, which appears to be re-inventing itself.