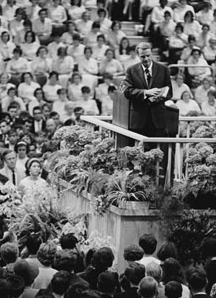 The world renowned evangelist known for saying: “My home is in Heaven. I’m just traveling through this world,” is finally home. Billy Graham passed from this life into eternity this morning, and he will be terribly missed! Had he lived to celebrate his next birthday on November 7th, he would have been 100!

Graham, who preached to more people than anyone in history, had humble beginnings. Billy grew up on his family’s dairy farm near Charlotte, North Carolina. He was the eldest child and had two sisters and a brother. When Billy was 16 years old, one of the farm workers, Albert McMakin, convinced him to go to a tent revival in Charlotte where Mordecai Ham was speaking. According to his autobiography, Graham was converted in 1934 during that series of revival meetings.

After graduating from high school, Billy briefly attended Bob Jones College, which at the time was located in Tennessee. After just one semester, he found it too legalistic, so he transferred to Florida Bible Institute. Two years later (1939), he was ordained by a group of Southern Baptist clergymen at a church in Florida. Billy then headed to Wheaton, Illinois, graduating from Wheaton College in 1943 with a degree in anthropology.

Soon after graduation, Billy Graham married his college sweetheart Ruth Bell, who passed away back in 2007. They were married for almost 64 years. Together they had five children, Virginia Leftwich (Gigi) Graham, Anne Graham Lotz, Ruth Graham, Franklin Graham, and Nelson Edman Graham. There are 19 grandchildren and numerous great-grandchildren.

Billy was greatly influenced by Henrietta Mears, who helped him wrestle with the issue of the infallibility of Scripture, which Graham came to accept. At the age of 30 Graham became the president of Northwestern Bible College in Minneapolis, purportedly the youngest president of any college or university at the time. He served in that position from 1948 to 1952.

It was during his tenure as college president that Graham held a series of revivals in Los Angeles. The year was 1949, and Graham ended up attracting national media attention preaching under circus tents in a parking lot. The revival event was to take place over a period of three weeks, but it was so popular that it ran for eight weeks!

Billy Graham attracted national media coverage, and, as they say, the rest is history. Early in his ministry career Graham became a national figure, garnering media coverage from the wire services and national magazines. An article in Christianity Today (which Billy Graham co-founded with his father-in-law, Dr. L. Nelson Bell) states the following:

During his life, Graham preached in person to more than 100 million people and to millions more via television, satellite, and film. Nearly 3 million have responded to his invitation to “accept Jesus into your heart” at the end of his sermons. He proclaimed the gospel to more persons than any other preacher in history. In the process, Graham became “America’s Pastor,” participating in presidential inaugurations and speaking during national crises such as the memorial services following the Oklahoma City bombing and the 9/11 attacks.

“He became the friend and confidante of popes and presidents, queens and dictators, and yet, even in his 80s, he possesses the boyish charm and unprepossessing demeanor to communicate with the masses,” said Columbia University historian Randall Balmer.

Graham’s online biography reveals what we believe to be the reason for his worldwide audience. It states:

He is known as a pioneer in the use of new technologies to preach the Gospel, from radio and television to films and the internet.

Not only that, Graham wrote over 30 books, and many of them were on the best-seller lists for months. Just As I Am (2007), was one of them. In this autobiography, Graham reflected on how his life and ministry call as an evangelist had been shaped by his faith in Christ.

When I was growing up, ‘Billy Graham’ was a household name, and whenever his ‘crusades’ were televised, my family would always watch. He took priority over anything else that was on TV, and we were so proud that he was a native North Carolinian. The picture at the top of the post is how I best remember him. I am so grateful for my Christian parents and for Billy Graham who affirmed in such a convincing way that God loves me.

Dee wanted me to share that when she was a teenager in Salem, Massachusetts growing up in a non-Christian home and never hearing about Jesus or the Gospel, the first time she ever heard about a God who loved her was from the lips of Billy Graham and because of his faithful explanation of a loving God, it led her to begin seeking after God and striving to understand the Bible. Her whole life she has been so grateful to Billy Graham for his television ministry. She also reminisced that during her formative years, her father and mother would sit with her and listen to him on TV.

Boz Tchividjian has written a wonderful tribute to his grandfather (whom he fondly called ‘Daddy Bill’), which was published in The Washington Post. Boz explained:

My earliest memories of Daddy Bill are of spending summers and holidays with him and my amazing grandmother Ruth Bell Graham in Montreat, N.C., traveling to his evangelistic meetings around the country, and hosting them at our home in South Florida. There, my grandfather would take us to his favorite restaurant, Morrison’s Cafeteria.

Billy Graham always came across as a humble servant of God, and the above information confirms it. Boz then wrote:

I am forever humbled to have known and loved a man who was the real deal — who was same person whether he was in front of thousands or whether we were walking alone through the woods. In an era when many evangelical leaders were exposed for deep moral and financial failings, I am grateful that my experience was much different. I could have easily grown to become cynical about Jesus and those who claim to follow him, but I knew and loved a man who made Jesus that much more beautiful to me.

There is so much to say about this trailblazer who impacted nearly 200 million people in his lifetime. Billy Graham was such a wonderful example of a Godly servant, yet he admitted publicly that his faith was a challenge to him, acknowledging that the Christian walk is a difficult one, but one worth walking.

How incredible that what started in 1949 as a Tent Revival became the largest ministry in the world. For such a time as this…

What most impressed Dee and me about Billy Graham was his ability to reach across denominational lines and unify those ‘in the faith’. Where are the Christian leaders today who can bring together so many different denominations (as Billy Graham did)?

Dee called to say that the Lenten service at her church this evening started off by talking about the legacy of Billy Graham. Then the congregation sang Just As I Am. Dee shared how on the way out of church she told the vicar (at her Lutheran church) that the reason she was there tonight is because when she was a young teen she heard Billy Graham say that the Creator of the Universe loves her. It’s a reminder that none of us can hear too often… 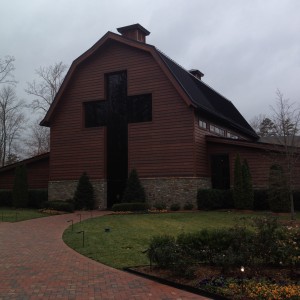 Soon Billy Graham will be laid to rest beside his beloved Ruth on the grounds of the Billy Graham Library in Charlotte.

Dee and I had the privilege of visiting this special place a while back, and we highly encourage everyone to go! We enjoyed a wonderful lunch there and could have spent hours going through all of the exhibits. That day I took the photo on the left.

We understand that Billy Graham’s tombstone will be inscribed with the following words:

“Preacher of the Gospel of the Lord Jesus Christ”

We leave you with the message Billy Graham delivered in the wake of the 9/11 attack. It was comforting then and is inspiring now.