“Above all, don’t lie to yourself. The man who lies to himself and listens to his own lie comes to a point that he cannot distinguish the truth within him, or around him, and so loses all respect for himself and for others. And having no respect he ceases to love.” ― Fyodor Dostoyevsky, The Brothers Karamazov 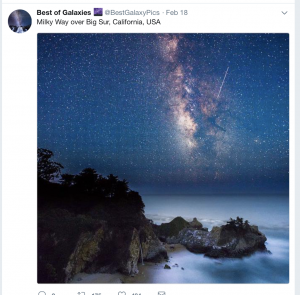 The statements from Austin Stone Church and Larry Cotton

Here are the two statements regarding the resignation by Larry Cotton that I have already posted. Please note the highlighted areas (editor highlighted).

Over the last few weeks, after seeking much counsel and prayer, I want to be the first to let you know that on Thursday, February 15, I informed the elders at The Austin Stone Community Church of my decision to step down from my staff ministry leadership position. It has been my honor to be a part of what the Lord is doing here at The Austin Stone Community Church. I have been extremely privileged to serve with brothers and sisters whose ultimate goal is to see Jesus lifted high, and I will greatly miss working here. I know this is the beginning of a new season for me, and I have peace that God will use me for His glory.

Brokenness and sin have unraveled the fabric of our world, resulting in injustice, pain, and suffering. I am more convinced than ever that the only One able to mend the brokenness and unraveling of this fabric is Jesus Christ. To the best of my ability, with God’s power, I desire to be a man that He might use to mend this brokenness.

This is why I want to express again my deepest grief and sorrow for Jules Woodson and all those who were wounded by what happened in 1998. During my leave of absence, I have come to better understand the weight of my mistakes and my responsibilities as a church leader at that time. I wish I had known 20 years ago what I understand today. I now understand that I did not do enough to serve Jules and help her feel protected and cared for —I wish I had done more. I understand that I failed to report the sexual abuse —I wish I had reported to the proper authorities. Even though it’s impossible, I wish I could go back in time and correct these mistakes.

I contributed to the pain and suffering of Jules and others, and for this, I feel great sorrow. I can identify with the words of Paul in the scriptures that help me see–Jesus came into the world to save sinners–of whom I am the worst. But I was shown mercy so that in me, the worst of sinners, Christ Jesus might display his perfect patience as an example for others who would believe in him and receive eternal life. Only Jesus can mend the unraveling caused by sin and weave in true justice, peace and healing.

I am praying for healing for Jules; that she might be comforted by the peace of Christ even in the midst of her pain. I hope for her forgiveness of me. I pray for The Austin Stone to continue to be a safe and Christ-honoring environment for men, women, students, and children to grow spiritually and flourish. And I thank you, my church family, for your continued love and prayers.

I love you all dearly.
Larry Cotton

Message from the Elders:

As you recall from our communications to you beginning January 5th, an allegation was made against Larry Cotton regarding his response to the reported sexual assault of a young woman by a youth leader at the church where he was on staff in 1998. Given the seriousness of the allegations, we placed Larry on leave of absence, and engaged the attorneys at MinistrySafe to conduct a thorough investigation.

During this season, Larry has been prayerful in seeking after the Lord for wisdom and clarity as to how to honor the Lord and act in obedience to God’s word. As a result of much prayer and counsel, Larry has communicated to the elders on February 15th that he desires to step down from his staff ministry leadership position at the Austin Stone Community Church, effective immediately. In recognizing and grieving for his errors of the past, Larry is illustrating the kind of Christlike character we know and affirm in Larry today.

As a church, it is our desire to help him seek forgiveness from those who were hurt and foster any reconciliation that might be possible in the future. Even though he is no longer on staff, Larry does remain in good standing as a partner of our church. Through this process, we have affirmed our belief that Larry did not intend to cause harm, but we understand and support his decision in light of the consequences of his actions. We are heartbroken for Larry and we will deeply miss his presence on staff, as well we are committed to shepherding and caring for him and his family.

We invite you to join us in praying for compassion, wisdom, and discernment as we journey forward. We have also already begun the process of working with MinistrySafe to review our policies and update training for all of our staff and leaders on preventing and reporting abuse. We continue to remain committed to ensuring the safety of victims and advocacy for individuals who have suffered abuse.  We strongly urge you to report to Child Protective Services or appropriate criminal authorities if you suspect the sexual abuse of a minor.

If you have further questions or concerns, please contact your campus leadership. We would love to hear from you.

Grace and peace,
The Elders of The Austin Stone Community Church

Amy Smith of Watch Keep requested and received this clarification today from a pastor at Austin Stone Church. 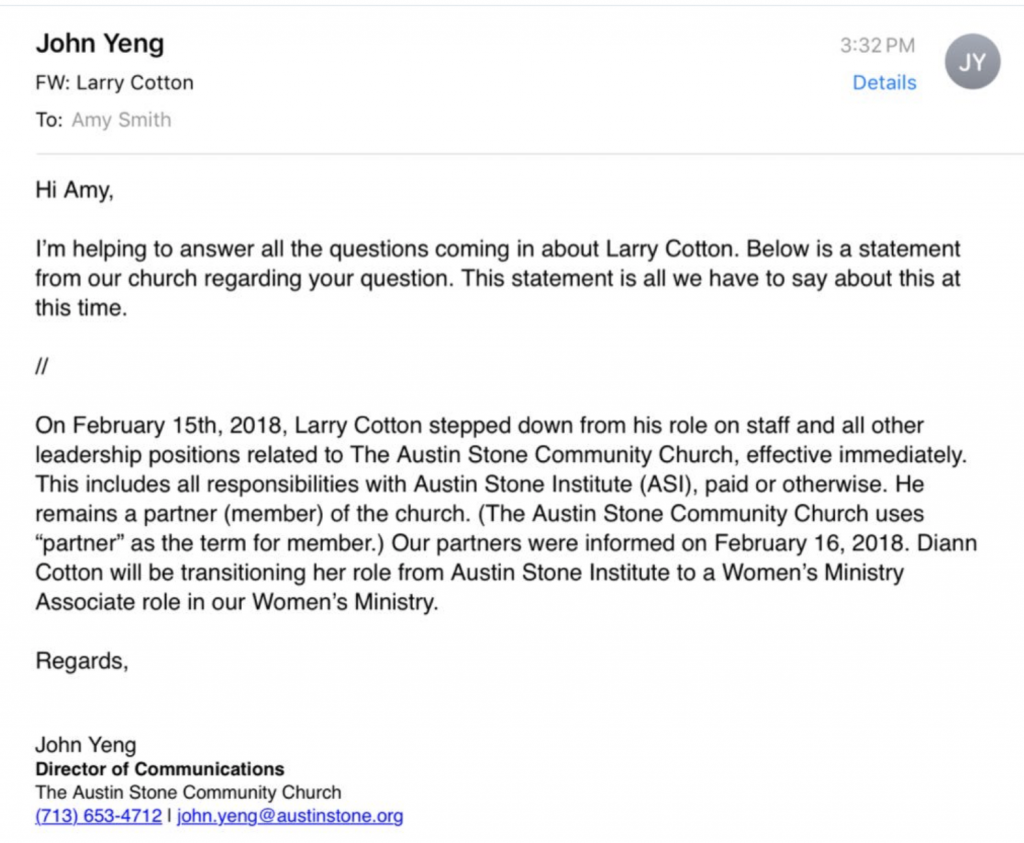 What do these statements tell us?

I will have been writing about sex abuse in the church for 9 years in March. This is the first time that I can report to you that a clear expression of guilt has been made in the mishandling of sex abuse. That includes what many believe was Matt Chandler’s *apology* at The Village Church. Amy Smith and I were privy to some of the behind the scenes maneuvering in that case and we know that people were not told the entire story. We are not at liberty to say more on the matter but it is frustrating, to say the least.

I am pleased that one of the members of The Gospel Coalition (TGC), Austin Stone Church, has actually acted to bring some form of justice in a sex abuse situation. Given that TGC is stuck in a bad romance with “He whose name must not be spoken,” I had despaired that any of their churches would ever move beyond lip service. So, this is a tip of the hat to Austin Stone.

Here are the important points made by Pastor Yeng about Cotton.

Here are the salient points made by Larry Cotton.

Andy Savage abused his position as pastor with Jules Woodson, a student in the high school ministry and everyone knows it.

This case is totally clear cut.

This case was closed from the first minute when Savage and Conlee admitted what happened. Larry Cotton has simply put a padlock on the situation. There is nothing that can be said at this point that will justify the actions of Conlee, Savage and Bradley.

Red flags for the safety of the youth Highpoint Memphis

Imagine sending older high school students to this church’s youth program, knowing that these pastors think that sex between a 22 year old pastor and a 17 year old kid is nothing to get upset about. One and done, ya know. Does it raise any red flags for you? It does for me.

Last year, we had to inform Highpoint Church that they had a pedophile leading worship. You can read about that here: Highpoint Church Memphis Has a Convicted Statutory Rapist Leading Worship. I would assume that the church does background checks, right? So why was that guy there? Given this history at Highpoint Memphis, along with Conlee blowing off Savage’s sex abuse. I would say that Highpoint Memphis has a problem. They MUST take sex abuse seriously.

The problem for Bradley, Savage and Conlee is how to do a work around.

Yes, there is more that could have been said by Cotton. However, what he has said has now created a serious problem from Bradley, Savage and Conlee. The pastor to whom Jules first reported now says this was sex abuse and that the police should have been involved. So, what are they going to say?  Frankly, if all three of these men continue in their pattern of denial, they will forever be viewed as the guys who covered up a reportable sex abuse offense.

Jim Pritchard, administrator at Highpoint, has said the investigation there by Fort Worth, Texas, attorney Scott Fredricks includes a review of past and present actions by church leaders regarding Savage, as well as the impact of those actions. Fredricks also is advising the church “as it makes decisions about the future of ministry at Highpoint.”

A separate investigation, expected to begin after the Savage review is complete, will evaluate the church’s child protection practices. MinistrySafe, also based in Fort Worth, will conduct that investigation.

I would say that the lawyers and the investigators have their tasks cut out for them. There is no solution to the problem. Highpoint Memphis cannot bring Savage back with a straight face. So, they will try some Bible gymnastics by repeating *imperfect people, forgiveness, organic, incidents, etc.” ad nauseam while having some worship leaders (hopefully having passed background checks) screaming “Savage and Conlee: you are worthy.” They will not medal in this event, for sure.

Can I say something to that *You are worthy* nonsense? There is someone worthy here but it is not Savage and it is not me. It is Jesus and I am frankly getting tired of *Bible light* people making themselves and their failed leadership the focus of their worship. It is time for some humility here but amidst the screaming performances and prophetic shenanigans, I’m not seeing it.

Soon, Highpoint Memphis will see how the world views what has been going on in their church. They better pay attention if they take being the *light on the hill* somewhat seriously.

The ugly tweets attempting to embarrass Jules Woodson by talking about finances, teen years, etc. have been picked up nationally. How dare any of them pile on further abuse to that which Jules has already experienced. The stupid tweets by some people who think they have been gifted with spiritual discernment have been noted with shaking heads. The church members may see these tweets coming right back at them. When they do, I hope they think about it.

As of this moment, Highpoint Memphis and its leadership are in no way prepared to care for victims of sex abuse. It is ludicrous for them to think that they are, given their response to Jules Woodson. Instead of channeling ridiculous prophecies, the pastors and church members need to spend some time in repentance for their woeful, damaging response to the pain that Jules Woodson experienced.

So folks, sit back and watch this Olympic worthy event: Bible gymnastics! It is sure to be fascinating.

Note: I have emailed Chris Conlee and Steve Bradley for comments regarding Larry Cotton’s resignation. I have yet to receive a response.