“The abused are all around us, regardless of religion, race, or gender. If the Christian community doesn’t know how to protect children from experienced abusers, recognize the signs of abuse, measure the scope of the abuse, and effectively respond to past or present abuse disclosures, the abused and those who abuse them will slip through the cracks of our ignorance, despite our best intentions.” Boz Tchividjian link 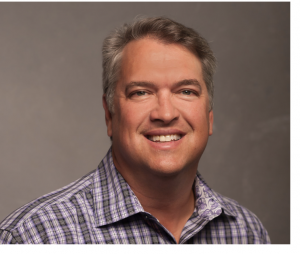 This past week, I was struck again how deeply abuse cuts into the souls of victims, often lingering unresolved for decades. Our readers have heard the pain that Jules Woodson has experienced.

Sadly, there is another women was was abused 20 years ago as a high school student in a youth ministry.. The Daily Mail posted Florida pastor, 52, takes leave when former intern accuses him of emotionally abusing and harassing her 20 years ago

Facebook is often the first place where victims discuss their pain and find support.

The victim (and I believe she is a victim) first discussed her pain in a Facebook post.

The accusations against Orangewood Church pastor Jeff Jakes first arose earlier this week after the alleged victim stated in a Facebook post that she suffered emotional ‘abuse’ at the hands of the holy man in 1998. 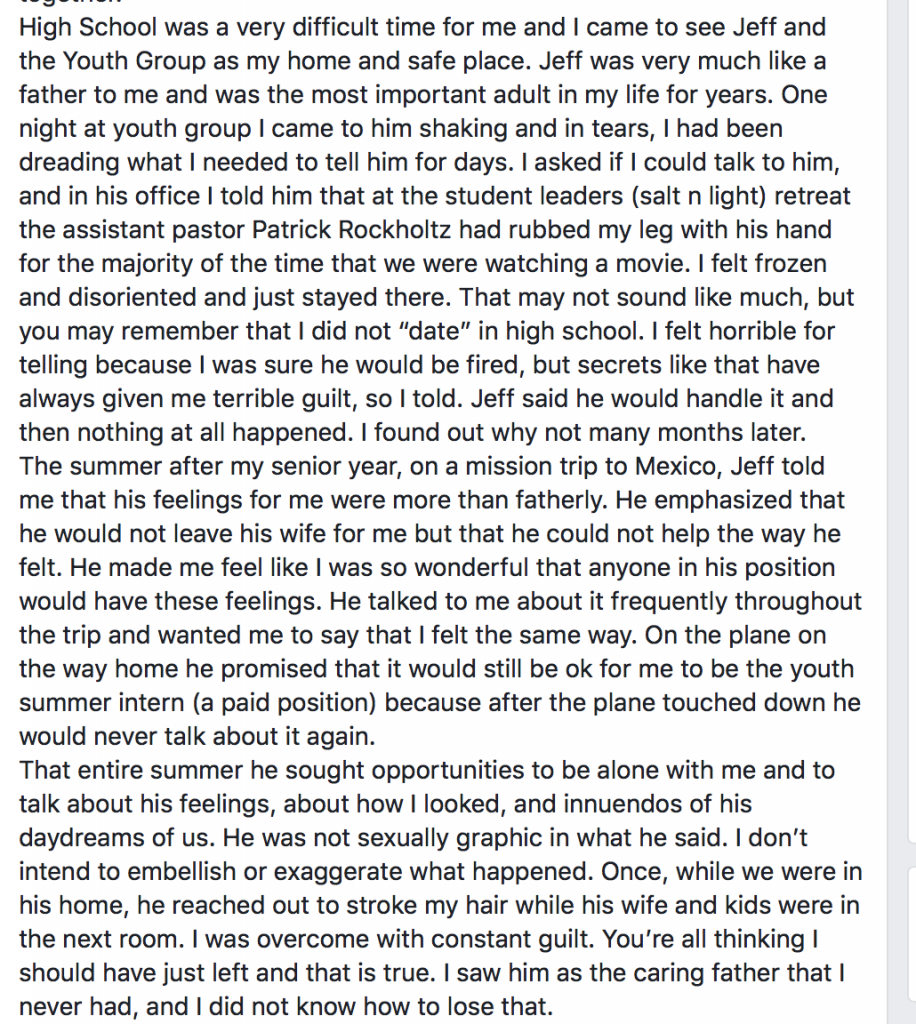 Please continue reading at her Facebook page. She continued her thoughts in another post, addressed to the pastors at Orangewood Church. This is very important. She stresses the fact that this was not addressed 20 years ago and so the pain is unresolved. This pastor, like Andy Savage, has gone onto to become a successful Head Pastor at Orangewood. 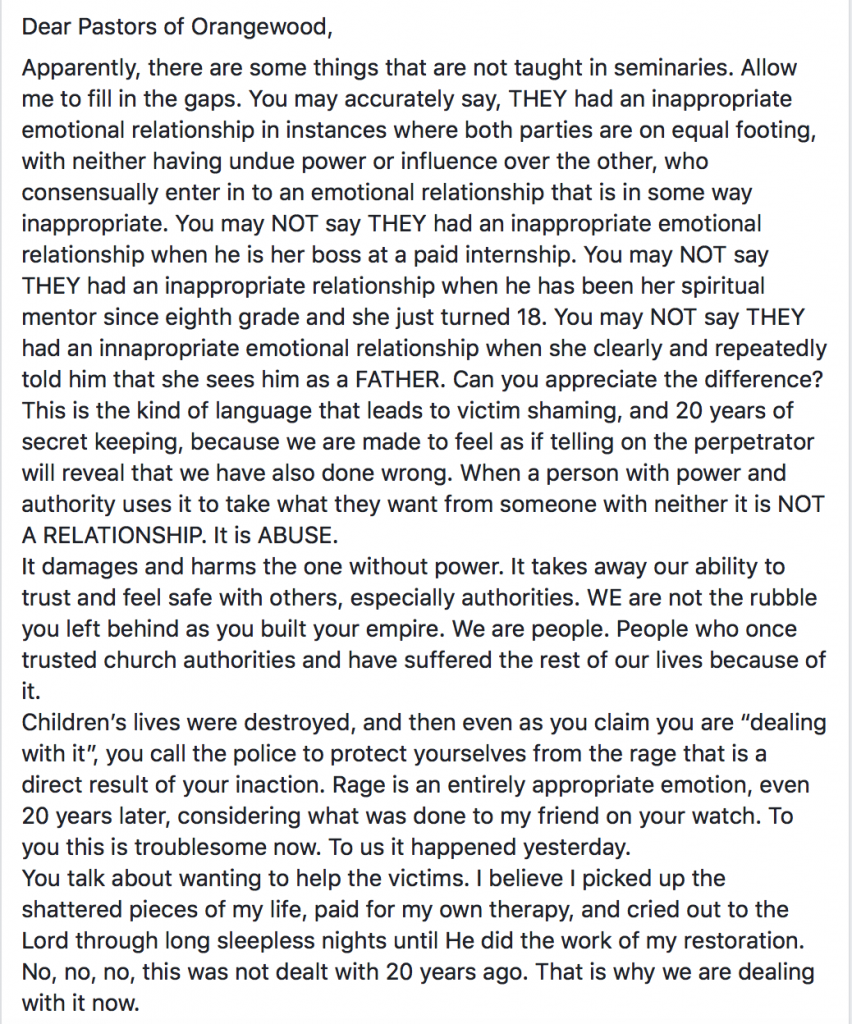 What happened 20 years ago?

Orangewood Church is a PCA Church and does not appear to be associated with The Gospel Coalition or 9 Marks.

Orangewood Church is a member congregation of the Presbyterian Church in America (PCA) and we adhere to the Westminster Confession of Faith as a basis for our Reformed faith.

While serving as his intern during a mission trip in Acapulco, Mexico, Snyder said Jakes, then 32, confessed his romantic feelings for her at the hotel they were staying at.

Snyder said after the conversation at the hotel, Jakes ‘sought opportunities to be alone with me and to talk about his feelings, about how I looked, and innuendos of his daydreams of us’ the entire summer.

According to the Orlando Sentinel in Maitland church leader steps aside after former intern’s harassment claim:

It was a mission trip in 1998, but Katherine Snyder, who was 18, said she still remembers standing frozen as her youth minister — a man she admired like a father — confessed his romantic feelings for her.

“I was so confused because I revered him,” Snyder, now 38 and living in Atlanta, told the Orlando Sentinel. “I saw Jeff as the one who could tell me about God.”

She said the conversation took place on a stone porch in a hotel in Acapulco, Mexico, overlooking the ocean. She was an intern to Jeff Jakes, who was 32 at the time, at the Presbyterian Orangewood Church in Maitland. A recent graduate of Orangewood Christian School, she was heading to college in Kentucky that fall.

…“That entire summer he sought opportunities to be alone with me and to talk about his feelings, about how I looked, and innuendos of his daydreams of us,

There have been reports of other inappropriate behavior issues involving Jakes and students.

The Orangewood Church in Maitland said they are also investigating separate claims of abuse made by other students against Jakes, but have refused to identify any of the alleged victims.

According to the Orlando Sentinel:

After her Facebook post, Snyder said she was flooded with private messages from others who said they endured abuse — emotional, spiritual and physical — by staff at Orangewood church and school years ago, though none have yet spoken publicly.

Church elder Gary Wilson told church members last Sunday that the church would contract “independent professionals” to help investigate allegations from other former students, of which he said church elders were not aware until Snyder sounded the alarm.

Please note the similarities to Jules Woodson’s story,. It was the stories coming out due to the #MeToo movement that gave her the courage to come forward. According to the Orlando Sentinel:

Snyder said she had tried to simply forget her experience at Orangewood. But last month, after more and more stories of sexual harassment and assault came out through the #MeToo movement, she changed her mind and decided to post on social media.

The church leaders told her that they did not take Jakes’ past behavior into consideration before he was hired as head pastor because he had *repented.*

According to the Orlando Sentinel, Snyder met with church leaders in Atlanta one day before posting on her Facebook page.

During that meeting, Snyder said she asked one of the pastors if Jakes’ past behavior was taken into consideration at the church when he became head pastor in 2003.

“He said, ‘No, not at all, because he has repented,’” she recalled. “It’s not OK for someone who has done those things to lead a church.”

Sadly, the church has admitted that complaints against Jakes were not new to the church leadership!

I still don’t get this! What is wrong with the PCA and other church groups who, time after time, choose to ignore such reports? How could the church leadership hear about this from Jakes and not try to find out what happened to the student? Did they use the Highpoint Church mantra: It was 20 years ago so it doesn’t matter??The lack of emotional maturity in some of these church leaders is appalling. I believe that all of them need to seek a counselor to find out what is missing in their emotional makeup.

Church elder Gary Wilson acknowledged that Snyder’s claims were not new to some in the church’s leadership.

‘Jeff had previously openly shared this difficult time in his and [Snyder’s] life as a way of encouraging them to guard their ministries, families and protect everyone as well as the peace and purity of the church,’ he said. Its unclear what that ‘difficult time’ specifically entails.

Snyder disagrees with this being characterized by church leaders as an *inappropriate emotional relationship.*

Snyder, who now works with abused children, calls this abuse.

He kissed her cheek, caressed her hair and held her hand when others weren’t looking.

“He even boasted to others that I had grown spiritually because of him, as if that excused it,” she said. The persistent messages and emails, Snyder said, continued months into her first year in college at Asbury University. Riddled with guilt, she eventually told her parents that winter.

Jakes addressed his congregation before his sabbatical.

‘I am deeply saddened and grieved at the impact that my sinful actions have upon someone who was trusted to my care and the student ministries,’ Jakes said during his sermon last Sunday.

‘I was grieved 20 years ago and I’m grieved today. I’m brokenhearted for the pain I’ve caused my wife, the mar on Christ’s church. I’m truly sorry for any pain that this story may connect to a story of pain and brokenness in your life.’

Churches: Please keep your expressions of sympathy for the perp out of the public eye since it can cause pain to the true victims.

Highpoint Church will continue to be critiqued for their standing ovation for Andy Savage who admitted to an organic sexual escapade with his student when he was an ordained youth pastor. This was inappropriate. According to the author:

That standing ovation has been heard around the world.

This is confusing on a number of levels. First, no one should ever receive a standing ovation when it comes to alleged abuse—unless it’s directed at a victim with the courage to speak out. When it comes to victimization, the victim should always be the center of our attention.

This church had many who lined up to hug Jakes after his announcement. According to the Sentinel:

Dozens of members lined up to hug Jakes and his wife, who sat in the audience as he read his statement.

Expressions of concern and condolences should be done in private, far from the eyes of a watching world which has heard one too many stories of church sex abuse. It is highly likely, given statistics, that a victim of abuse was present in the church that day. How do you think she felt, seeing church members hugging the admitted abuser?

As of today, Jakes is still listed as the lead pastor of Orangewood.

The good news: Orangewood Church quickly responded two days after the Facebook post by  having Jakes take a leave from the pulpit and contacting Boz Tchividjian’s GRACE to investigate,.

There is an inherent bias built into most investigative organizations which are brought in by churches and parachurch ministries to review their responses to to abuse. It is quite simple to understand why. These groups earn money by providing this service. Some earn a lot of money.

Most of these groups get selected to assist with investigations by the church leadership. So, in order to be selected, church groups will most likely hire groups that are predisposed to *believe the leaders.” We have been writing about this bias for years. Here is a link to a more recent article dealing with our concerns as applied to the Sovereign Grace Churches debacle.

I am convinced that there are very few groups that *investigate* child sex abuse that do not have inherent loyalties and ties to the church or church denomination that they are investigating. It is human nature. We believe that GRACE is the most nonpartisan group out there. We are inclined to trust the results of their inquiry and deliberations above other groups. We also know that they will attempt to reach out to other potential victims in these churches. #MeToo #ChurchToo #JusticeforKatherine

TWW stands with Katherine Snyder and all other victims of abuse within Orangewood Church. We believe her and express our profound sorrow for her 20 years of suffering. We pray for her, as well as all other possible victims, and offer this blog as a place of support for them.

Here is a video of Boz Tchividjian speaking for GRACE.