“I am asking SGC to support their recent claim that I am making “false accusation”, “mischaracterizing” and communicating things that “are not true and have never been true”, and instead show true care for the victims by finally dealing transparently with these concerns, through taking one specific step:

Allowing GRACE, an Christian organization whose expertise is sexual assault and institutional dynamics, to do a thorough independent investigation of the organization’s historical and current handling of abuse complaints, which will be released to the public.” 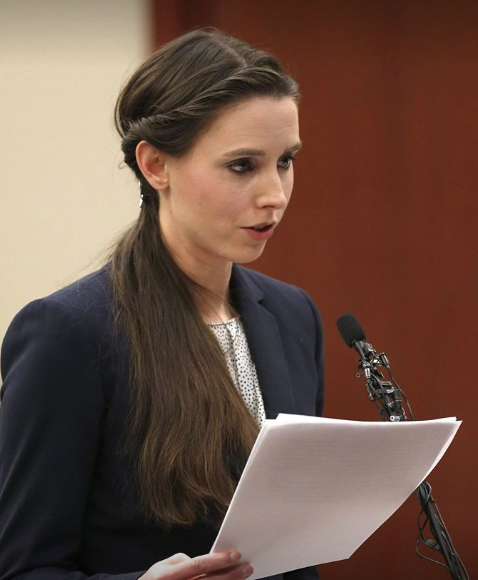 Can there by any doubt that God’s sovereignty is on full display in the circumstances involving Rachael Denhollander? As we shared in our previous post, she was the first of Larry Nassar’s victims to file a police report against him, which she did on August 29, 2016.

Since that time, Nassar’s victims have gradually come forward. At last count, the number was well over 260. Earlier today, Nassar appeared in court for the third and final time. According to an article in the New York Times, Nassar was sentenced to an additional 40 to 125 years. This is on top of the sentence of 60 years for a federal conviction related to child pornography and a sentence in Ingham County of 40 to 175 years. While we are deeply saddened for what these victims experienced under the guise of ‘medical treatments’, we are grateful that the man who sexually abused them will be confined in prison for the rest of his life.

In our previous post, we concurred with Rachael Denhollander’s husband, who believes his wife is a real live superhero. We also shared that Rachael had been interviewed by Morgan Lee of Christianity Today, who inquired about one of Rachael’s remarks in her impact statement which she read in court. It is included below.

“My advocacy for sexual assault victims … cost me my church.”

How can this be? Isn’t ‘the church’ supposed to be the place where victims of all kinds can seek shelter and support?

A few months before Mahaney was a guest preacher at the Denhollander’s church, an article appeared in The Washingtonian about Mahaney and the church he pastored for 27 years. It was entitled: The Sex-Abuse Scandal that Devastated a Suburban Megachurch: Inside the Rise and Fall of Sovereign Grace Ministries (2/14/16). No doubt Rachael Denhollander had read this article along with other information as she investigated Mahaney and SGM, and she became terribly concerned. After sharing these concerns, the Denhollanders were told that this was not the church for them.

Getting back to the recent interview in Christianity Today, Rachael Denhollander made this profound statement:

The ultimate reality that I live with is that if my abuser had been Nathaniel Morales instead of Larry Nassar, if my enabler had been [an SGM pastor] instead of [MSU gymnastics coach] Kathie Klages, if the organization I was speaking out against was Sovereign Grace under the leadership of [Mahaney] instead of MSU under the leadership of Lou Anna Simon, I would not only not have evangelical support, I would be actively vilified and lied about by every single evangelical leader out there. The only reason I am able to have the support of these leaders now is because I am speaking out against an organization not within their community. Had I been so unfortunate so as to have been victimized by someone in their community, someone in the Sovereign Grace network, I would not only not have their support, I would be massively shunned. That’s the reality.

As you might imagine, these remarks were not well-received by leaders in Sovereign Grace Churches. They quickly posted the following response on their website. (see screen shot below) 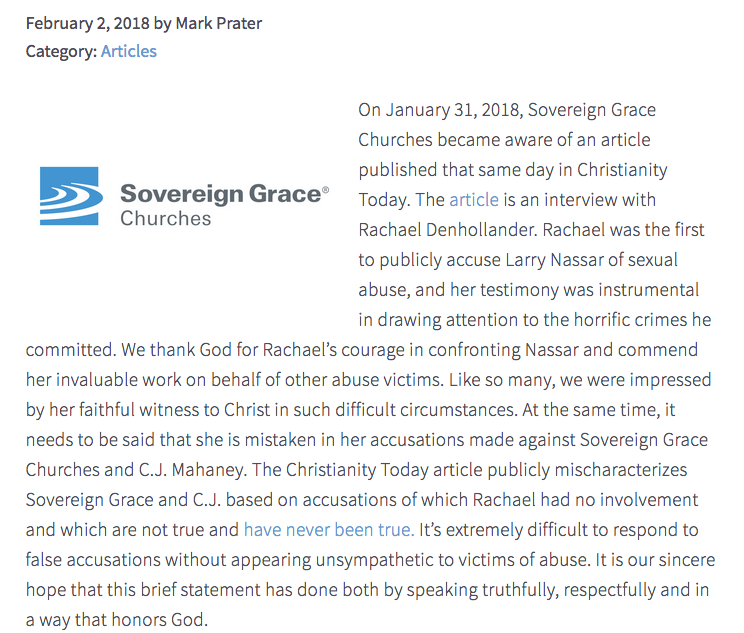 Incredibly, Mark Prater claims the accusations are “not true and have never been true”. The link above (have never been true) takes you to an Open Letter sent to Sovereign Grace Churches in the wake of the dismissal of the civil lawsuit. Notice there is no mention of the lawsuit being dismissed on technical grounds (the statute of limitations had expired for most of the plaintiffs and two of the plaintiffs for whom the statute of limitations had not expired filed suit in the state of Maryland and not the Commonwealth of Virginia where they reside.

Here are excerpts from that Open Letter (see screen shots below). 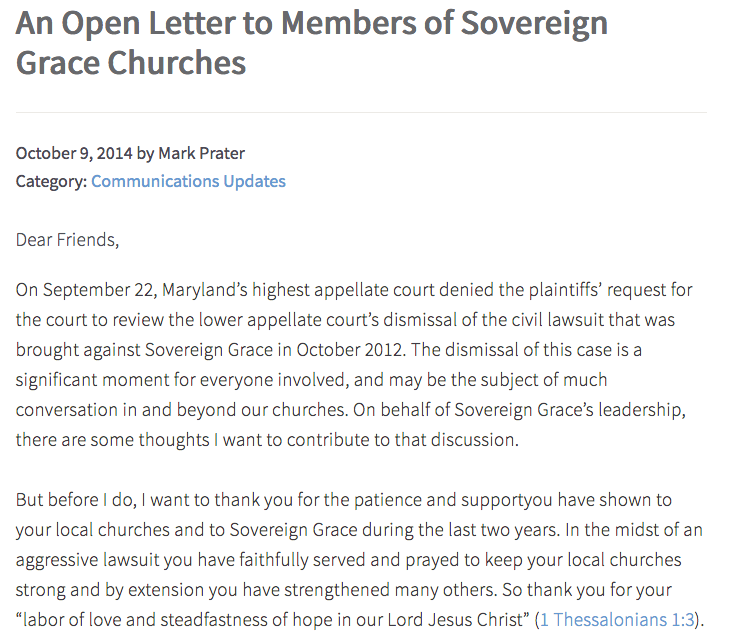 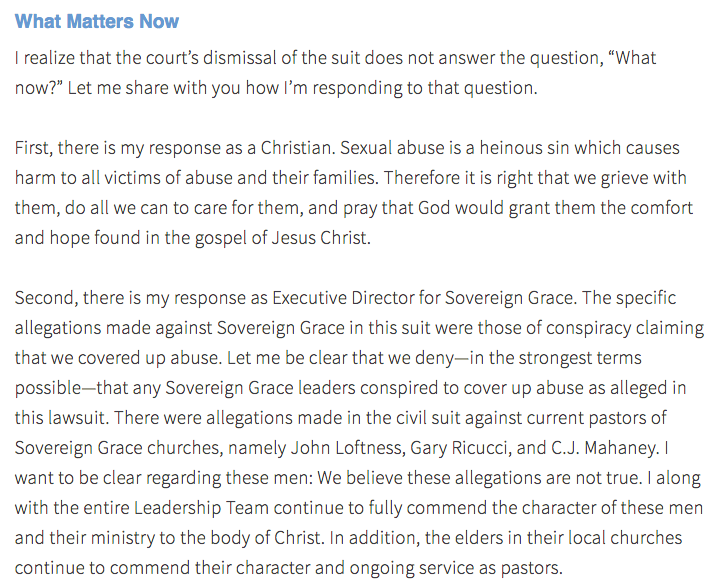 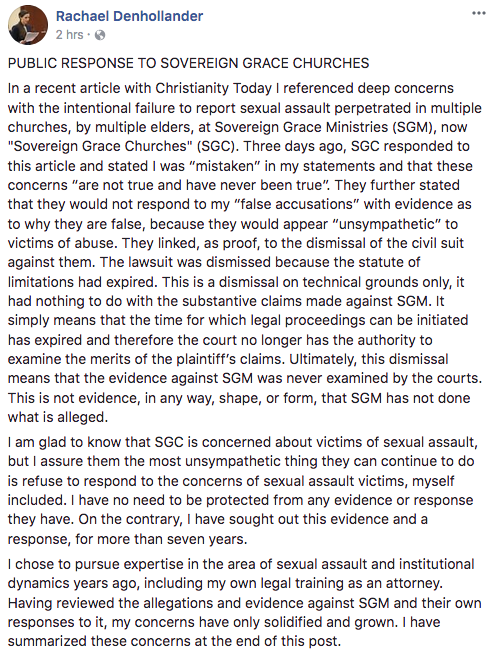 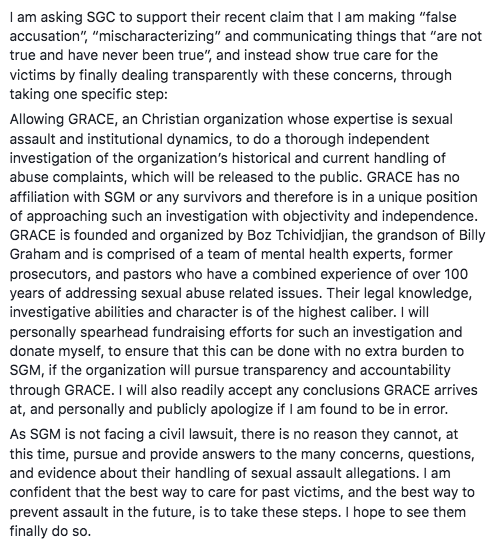 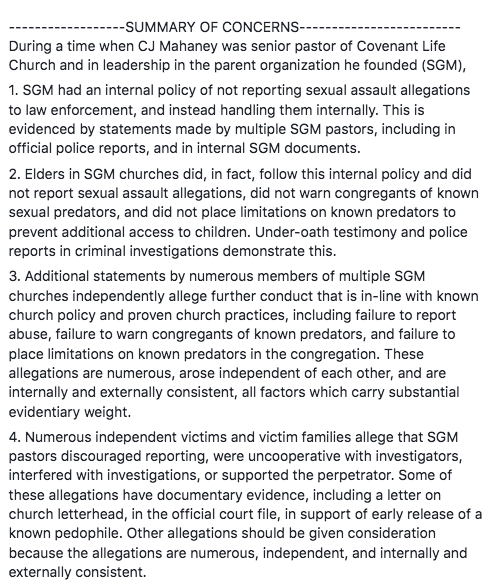 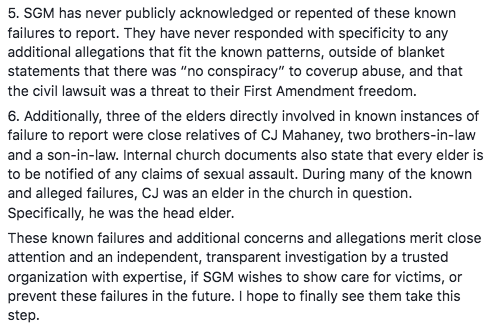 Here is an excerpt from that article:

Unfortunately, it is not uncommon for churches and religious organizations to try to handle sexual assault allegations internally. Bob Jones University, Sovereign Grace Ministries, the Association of Baptists for World Evangelism, and the Institute in Basic Life Principles have all come under fire in recent years for not adequately addressing sexual abuse within their communities. Some of these organizations have been accused of blaming the victims—even those who were children at the time of abuse—and pressuring them to forgive their abusers rather than report them.

Incredibly, SGM was named in two CT articles on the same day, and interestingly, both were written by women! We encourage you to read the sections in this article — The Problem of Bias and The Importance of Impartiality.

We believe Rachael’s recommendation of involving GRACE (a Christian organization founded and run by Boz Tchividjian) to investigate the organization’s current and historical handing of sex abuse claims is excellent!  Her offer to head up the fundraising for such an investigation and to contribute personally is most admirable!

Who thinks Mark Prater and Sovereign Grace Churches will take her up on this offer?