As Boz Tchividjian says, we need to be careful to avoid the “dangers of mob forgiveness that finds redemption stories where they don’t exist, while at the same time affirming perpetrators and re-traumatizing victims.” link 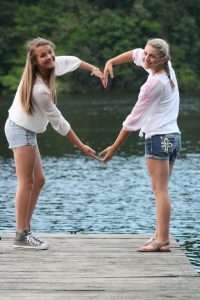 Today I was going to repost Amy Smith’s post which points out the difference between the original live Ben Fergiuson show and the one posted broadcast several days later: Andy Savage on the Ben Ferguson Show

Ben Ferguson claimed yesterday that he was being slandered so I decided to give him an opportunity to respond to the documented issues. I sent an email to his show requesting some sort of response since it seemed like the discrepancies were well documented by Watch Keep.

Just as I was getting ready to post, this tweet came out from The Ben Ferguson Show. You guys decide what is going on. 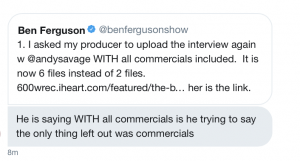 Do not denigrate the reputations of 22 year old adult professionals by calling them *college students who just made a mistake.*

Scripture is clear. We have all sinned but we have not all sinned in the same way. Our society bases its legal system on increasing punishments for more heinous crimes.

So are all 22 year old professionals just one step away from an organic sexual experience with a 17 year old teen?

My daughter was an emergency room nurse at the age of 22. Her skill set was such that she could take care of the sickest of the sick. Never once has she violated that trust by hitting on a dependent patient. In fact, she routinely turned down offers of dates from former patients, knowing that people can mistake gratitude with emotional feelings for the individual who got them through a scary situation. So are these people who Savage made the routine mistake of a college boy claiming that 22 year old nurses should be given a pass for hitting on a vulnerable patient?

What about the men and women of the military? Should we expect them to have an organic sexual experience with some poor village teens in Afghanistan because, after all, they are merely college age and college students make mistakes? Such a soldier would be dishonorably discharged.

How about our wonderful, sacrificial school teachers who can begin to teach at 21 years old. If a 22 year old teacher was caught having a *sexual incident* with a 17 year old high school student, what do you thing would happen? Well, not only would they be fired but they would go to prison if convicted. How do you think the Savage defense, that he had an organic sexual experience with a consenting adult, would play in court. More on this in a minute.

All of the people who are stating that Savage engaged in a consensual act, because he was just a stupid 22 year old college kid, are condemning the vast majority of 22 year old professionals who do their job with dignity and integrity. One woman claimed that maybe youth pastors should be older. Does she want all of the 22 year old professionals, including youth pastors, to quit their professional jobs because they are ALL college aged and can’t conduct their business without having organic sexual experiences?

Unfortunately, Andy Savage is one such professional who was 22 years old and did not live up to the dignity of his profession unlike the vast majority of 22 year old professionals. He is the one who had a problem, not the other 22 year olds out there saving lives, caring for students, and living out their occupations well. Do not denigrate their professionalism because Savage couldn’t contain himself.

Why we must protect our high school students as they mature.

I have heard from a number of folks that Jules probably liked Andy Savage. Of course she did! I bet that many of the teens did. That is is what happens to teens and that is why we must protect them as we help them mature into adulthood.

I know this because I was once a teen girl. When I was the age of Jules, I had a series of crushes. Let me confess to some of those: Paul McCartney, Andy Williams (go figure), all of the Monkees (don’t hate me), a nurse’s aid that I worked with one summer, the young guy collecting parking fees in back of Almy’s Department Store in Salem, MA,  at least 6 male high school students, a teacher, a security guard, and and every. male. lead. in the local musical theater ( I knew they were singing to me!) Each of these crushes were fleeting and unrequited except for Andy Williams which was unrequited  but lasted for 2 years.

Had Andy Williams driven up and asked me to go for a ride, I probably would have. I might have kissed him but I would not have expected to see his manhood displayed. That is not what I had in mind, whatsoever. I was thinking of a teen girl romantic moment, maybe sharing a sundae and holding hands in the moonlight.

I had a friend whom I shall call Susie. Susie was an early maturer. She began her 6 year sequential crushes on male teachers in 7th grade. She was painfully obvious about her affections as well. I remember in high school, when she would round up her friends (me included) when she overheard one of her current teacher crushes stating that he would be at Friendly’s after school with some other teachers. We would all haul over there, sitting  across the restaurant from them, giggling. Susie would get up and stroll pass the table, while smiling at the teacher. I was the quiet one, watching the events from behind my sundae. As she passed by, the teachers would all roll their eyes behind her back and continue on with their conversations.

Every single one of Susie’s teacher crushes treated her with kindness ands respect and never took advantage of their position.They also NEVER made fun of her and gently helped her into adulthood.

Let’s take a look at one teacher who did not do the same thing. She was 23 and had sex with a 17 year old student here in North Carolina. She was charged with two counts of indecent liberties with a student, lost her job and will stand trial. She most likely will receive prison time.

Now, in North Carolina, the age of consent is 16. So, since the male student was 17 and she was barely 23, why all the fuss? Shouldn’t we blow if off as consensual since the teacher is just a silly college age girl and they all do it? The very few people who are defending Savage would have to say “Yes. Let those poor teachers of the hook. They are just kids themselves and we are sure the 17 year old boy *wanted it.* I bet he pursued her. How could she resist?”

My husband always says “The church often seems to have lower standards than the secular culture. They are willing to blow off predatory behavior as a mistake or we’re all sinners or he was young or she liked him, etc. If we give ourselves a break, shouldn’t we be out there protesting in favor of the teacher who took advantage of her position? Did you know she will never teach again? My guess is that some of these critics of 17 year old girls would cluck their tongues in disapproval of that teacher.

Where is our wish to protect our students in our churches? Where are the women who remember what it is like to be a teenager, learning to deal with overwhelming emotions and crushes? Sadly, many people are more than content to dump their awkward teens on a student ministry and never fully understand what is going on in there. Sometimes, I think there are some pastors of churches who are just grateful for anyone to take the high school students off their hands. If the teen girls think the youth pastor is a *hunk,* so be it.

There have been threats by some people who claim to have known Jules as a teen to *reveal what she was really like.* Anyone who is/was a member of that church, who would do such a thing, should be ashamed. She should have been protected then and she should be protected now.

Here is a prediction. Just like I said that the obligatory standing ovation would not be a good idea before Highpoint did so, it will be even worse if people try to slut shame a teen age girl. If they do this, their church will be disgraced by a watching world which sometimes gets it better than people who proclaim Jesus as their Lord.

Don’t. go. there. If you do, I will remind you of this when the blow back occurs. It will and it won’t be just from me. Remember the ill- fated standing ovation and think twice.

Instead, protect our high school students and don’t shame them as they figure out their complex emotions.

Yes, the public has a right to comment on what they see at your church.

A smart woman who attends Highpoint commented on our blog. I call her smart because she went to Rhodes College, a great school. She said the world should just butt out and mind their own business. I told her that the Bible does not see it that way at all.

“You are the light of the world. A town built on a hill cannot be hidden.

I know this is hard to hear but you don’t get to pick and choose what they see and hear. You don’t get to tell them what they should get out of a sermon. If you want the public to hear you, you must listen to everything that they hear and see and deal with it.

I assume most of the people at Highpoint get the Gospel. If so, part of getting the Gospel is to understand that everyone sins and there are consequences. Some people sin so badly that they have not only broken God’s laws but the laws of society. Christians should be the first to come forward and confess their failures to those who are peering in. Christians should be first to go to the police when they have committed a crime. Christians should be the first to understand that God is present in the darkness and will eventually bring redemption to the situation when there is remorse and repentance on the part of the sinner.

Even more, Christians understand that God can take the worst crimes and sins and change the life of the person who committed them. Why is it that pastors who hurt 17 years old girls need to go back to the pulpit? Has anyone ever considered that God had, and has, something more meaningful for that person to do? Could it be that keeping this event on the down low for so long has prevented that person from seeing what God had in mind? Where is the trust in God to bring beauty out of ashes? The first step, sadly, is that the ashes must be collected and offered to God, in the face of the watching world.

As Boz Tchividjian says, we need to be careful to avoid the “dangers of mob forgiveness that finds redemption stories where they don’t exist, while at the same time affirming perpetrators and re-traumatizing victims.” link

In celebration of surviving a two year crush as a teen.