When asked whether he believed Arminians are Christian, R.C. Sproul responded: “Yes, barely.” 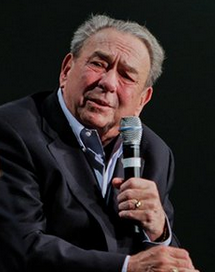 R.C. Sproul, a Reformed theologian and founder of Ligonier Ministries, died on December 14, 2017, at the age of 78. He was the son of a Presbyterian minister who came to faith in Christ during his first week of college. Sproul, who attended Westminster College on a football scholarship, was profoundly influenced by the team captain. He shared his personal testimony fifteen years ago with Christianity Today.

According to a tribute by Ligonier Ministries, R.C. Sproul married his childhood sweetheart Vesta in June 1960. He fell in love with her the first time he ever laid eyes on her – she was in 2nd grade and he was in 1st – no doubt a predestined encounter. Sproul is survived by his wife, two children (Sherrie Sproul Dorotiak and R. C. Sproul Jr., along with their spouses), as well as 11 grandchildren (one is deceased) and 7 great-grandchildren. His son is remarried, having lost his wife to cancer on December 18, 2011.

Sproul began preparing for the ministry after graduating from college. He earned his seminary degree from Pittsburgh Theological College (1964), his doctorate from the Free University of Amsterdam (1969), and later a Ph.D. from Whitefield Theological Seminary (2001).

Two years later (1971), Sproul founded a ministry in the Ligonier Valley, located just outside of Pittsburgh, Pennsylvania. According to the Orlando Sentinel:

Sproul founded Ligonier Valley Study Center in Stahlstown, Pa., where he offered classes on the “sin nature of humanity.”

Sproul moved the ministry to Orlando in 1984 and renamed it Ligonier Ministries. It eventually grew to become one of the largest Reformed educational and discipleship ministries in the world.

We are wondering why Sproul moved the ministry so far from its place of origin. While in Florida, he founded Reformation Bible College in Sanford (near Orlando).

“I think he has had an impact beyond Protestantism,” Milton said. “I see his passing as the falling of a great oak in the forest. But he released a lot of acorns. He left a legacy of faith that will be carried by others.”

Not everyone viewed R.C. Sproul with reverence. Sometimes he made remarks that were highly offensive to believers who do not identify as Calvinists. As the following quotation indicates, Sproul was once asked whether Arminians are Christians. His response was: “Yes, barely.” (see excerpt below)

The following clip is a good illustration of Sproul’s attitude toward those who may not embrace Reformed theology as fully as he did.

A recent article in Christianity Today praised R.C. Sproul for his ministry and its impact on so many. The CT article states:

Sproul’s legacy lives on in generations of laypeople and Reformed leaders whose theology was strengthened and shaped by Ligonier, the organization he founded in 1971 to fill the gap “between Sunday school and seminary…

Sproul brought theological education to the masses through his radio show Renewing Your Mind, his ministry’s Tabletalk magazine, over 300 lecture series, 90 books, and dozens of articles.”

The CT article also reveals that:

The global organization shares 2 million “biblical and theological resources” annually, with hundreds of thousands of students, readers, and subscribers in 105 countries.”

“It is hard to overestimate his influence on gospel-resurgent evangelicalism.”

Alistair Begg also shared his thoughts regarding Sproul in the clip below.

In the above video, Begg said Sproul always had a joke for him and that he will miss that. Check out Sproul’s wit with Al Mohler.

And given Sproul’s profound influence on the Reformed corner of Christendom, it will be interesting to see who succeeds him at Ligonier Ministries. At one point we assumed his son R.C. Sproul, Jr. would be heir apparent, but given his problems with Ashley Madison and driving while intoxicated (with his children in the car), we don’t see how it would be possible for him to follow in his father’s footsteps.

We’ll continue to monitor developments at Ligonier Ministries. In the meantime, please join us in praying for Vesta and the entire Sproul family. No doubt this will be a very difficult Christmas.