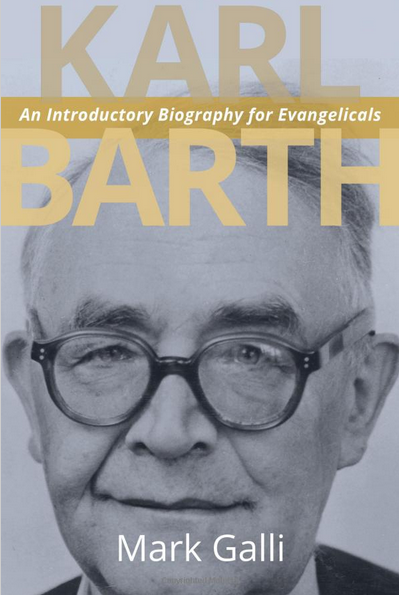 My October 2017 issue of Christianity Today arrived last week, and I have been making my way through it. CT’s Editor in Chief, Mark Galli, contributed an article entitled “The Godness of God”, which has been adapted from his biography Karl Barth: A Biography for Evangelicals, just published on September 28, 2017 (pictured above).

Perhaps the most controversial part of Galli’s two-page CT article is the following excerpt:

Barth’s Romans is, in some ways, one long commentary on the commandment, “You shall have no other gods before me. As Barth puts it simply, “Men are men, and God is God.” One way this works itself out is in how Barth interprets passages that we instinctively imagine are about us. (page 59)

To be absolutely frank, I really didn’t know much about Karl Barth. I recognized his name because I have heard him quoted in sermons delivered primarily by Reformed theologians.

In case you’re unfamiliar with Barth, here is a screen shot from the Theopedia article on him.

No doubt the primary reason for the recent focus on Barth is because he fits squarely in the “Reformed” camp.

Something else you should know about Karl Barth is his most unusual personal life. The reason Mark Galli’s article caught my attention is because I had just read some highly controversial information about Barth (prior to getting my latest CT magazine). I wanted to see whether Galli broached the subject, and clearly he avoided it.

In his article Karl Barth is Overrated (published on 10/4/17), Tom Cooper shares this shocking information:

Recently, some discussion has arisen on the blogosphere surrounding Karl Barth, and in particular, his odd relationship to Charlotte von Kirschbaum. Though for some time the exact nature of the relationship between Barth and his secretary was subject to speculation, recent publications have demonstrated what has been assumed: this was an adulterous relationship, almost certainly sexual in nature. Bobby Grow of the Evangelical Calvinist blog has written several posts on the topic, discussing his frustration with the obvious immorality in Barth’s life [1]. William Evans has added some of his own thoughts on Barth on the Ecclesial Calvinist blog [2].

Go to the above link to see the footnoted information.

According to the Wiki article regarding Charlotte von Kirschbaum, she was a Red Cross nurse who was interested in theology. In 1924 Charlotte met Karl Barth at the University of Göttingen when she was 25 years old. Prior to meeting him, she had been introduced to his writings. Barth both encouraged and helped her to attend secretarial school. By 1929 Charlotte was working as his personal secretary. She also assisted him in preparing lectures.

The Wiki article goes on to explain that in October 1929 Charlotte moved into the Barth household. Purportedly, Karl Barth and Charlotte shared an academic relationship, while Nellie took care of the children and the household. It seems Karl and Charlotte took semester break vacations together.

Not surprisingly, the relationship caused much consternation. Barth’s friends, as well as his mother and brothers, were not approving of the living arrangement, and Barth’s wife and children suffered much stress.
An interesting article published a few days ago provides the following insight (see screen shot below):

In researching for this post, I came across some very interesting information published in July 2009 by Steve Hickey, a Scottish pastor who was able to locate Karl Barth’s grave (see link below).
The hunt for Karl Barth’s grave

Here is a screen shot from the above post.

We loved the question Steve asked at the end of his post (see screen shot below).

I (Deb) voted for Nelly, and here are the results thus far. 🙂 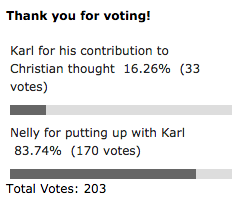 What is especially irritating to us is that Barth wrote about marriage as a life-partnership (see link below).

Karl Barth on Marriage as a Life-Partnership

As information spills out all these years after Barth’s death, all we can say is how hypocritical was this ‘great theologian’? 🙁

Yes, some in the Calvinista (Neo-Cal) camp are holding up Karl Barth as a great theologian, perhaps the most gifted one of the 20th century; however, we appreciate what Tom Cooper said in his post Karl Barth is Overrated.  Cooper wrote:

The question which arises is at this juncture is whether the immorality of a teacher has any impact upon the benefit of their teachings. While some have argued that it is irrelevant, as the truth or falsity of one’s teaching is not dependent upon anything within the character of that person, Grow has noted that the nature of such immorality is a Biblical disqualification from having a teaching position in the church.

We are of the opinion that not only is Barth’s immorality a Biblical disqualification from teaching in the church, it should disqualify him from being an authority on anything having to do with the Bible.

Does the above quote by Barth “Men are Men” equate to “Boys will be boys…” ?

Cooper goes on to state:

“he [Barth] was well aware of the sinful nature of his situation, and was also warned about it by Bonhoeffer and others. Yet, he remained unrepentant in such a lifestyle until his death.”

We’d love to hear your thoughts!