"The victim admitted that for months after the attack she would take half hour long showers saying, 'I scrubbed myself until I bled.' " 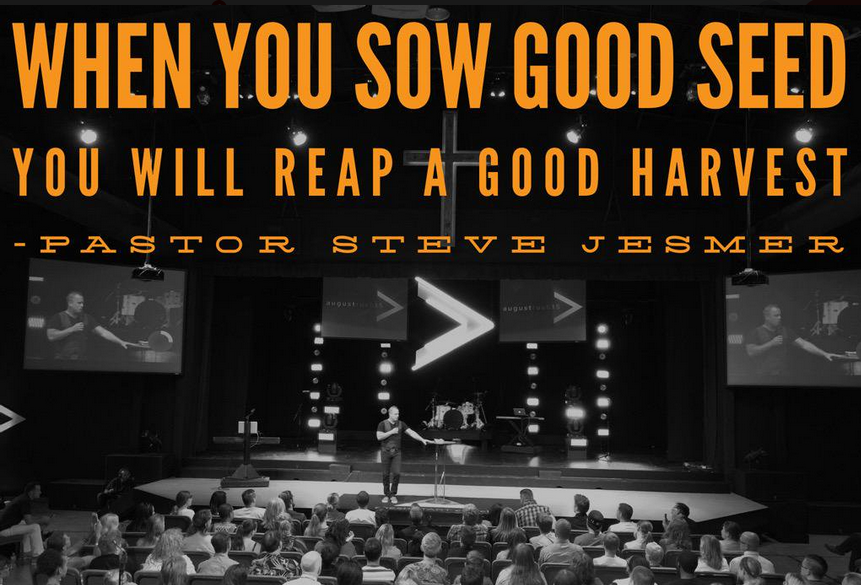 WARNING: This post, along with the links, contains graphic details of sexual assault.

This is a difficult post to write because a pastor's terrible sin has devastated so many lives, including his own. No doubt Pastor Steve Jesmer desperately wishes he had followed his own advice of sowing good seed in order to reap a good harvest…

Steve Jesmer, Jr. was Lead Pastor of a New England church plant called The Dialogue Church, located in Manchester, New Hampshire. According to Linkedin, Jesmer began serving in this capacity in April 2007. Then on June 7, 2007, the church filed as a non-profit corporation.

From all outward appearances, the church was successful, with Jesmer's persona being that of a 'hip' pastor (a la Mark Driscoll).

As I looked through some of the Tweets sent out since the church established its Twitter account in November 2008, I was struck by how active this congregation was. As an example, Dialogue Church hosted a 'Hope Weekend' last year. It was an outreach to those who were addicted to drugs and/or alcohol. The Manchester Ink Link promoted this event and included the following information about Pastor Steve Jesmer. 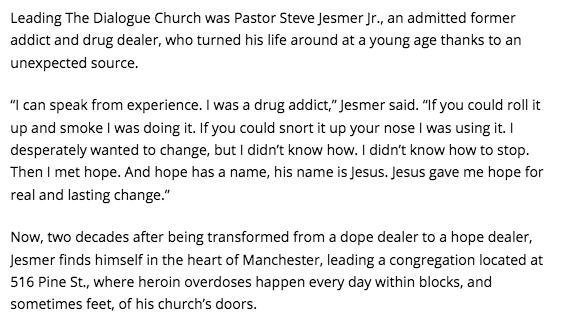 From a dope dealer to a hope dealer…

Then on August 22, 2016, Steve Jesmer, was arrested. According to the CBS Affiliate in Boston, Jesmer was

7News Boston reported that Jesmer turned himself into police on Monday night (August 22nd). It further revealed that:

Manchester Police said they have evidence Jesmer had sex with a 13-year-old girl in his church office… Police said there had been prior sexual contact at the girl’s house and he allegedly asked the girl to keep quiet.

The New Hampshire Union Leader provided details about the sexual assault. Jesmer was 38 years old at the time of the crime. His bail was set at $100,000.

According to the article, another pastor acknowledged in a Facebook post that Jesmer had been arrested (see screen shot below).

The above link no longer works, and almost everything on the church Facebook page has been removed.

According to court records, Jesmer allegedly told a fellow pastor in late June that he felt bad about something he did, and he described his actions as stupid, saying that "he had crossed the line."

Police say the other pastor contacted DCYF, and Jesmer was fired for what's referred to in court paperwork as "moral failure."

"I can confirm that the pastor at church, the current pastor, they've been overwhelmingly supportive of the investigation," O'Keefe said. "They've worked hand in hand with our investigators and continue to do so."

Police said they're continuing their investigation to confirm that there are no other victims.

MANCHESTER, N.H. — A girl told a judge Wednesday that she forgives her former pastor as he was sentenced to prison for sexually assaulting her.

Steven Jesmer was sentenced to at least five years in prison after he pleaded guilty to seven charges. Prosecutors said he betrayed his victim's trust, and the sentencing judge said he took advantage of his positions for his own selfish needs.

"I trusted you," the teenage victim said. "I looked up to you as a father figure, and I bet that made it easier for you to take advantage of me."

The girl described herself as a broken person. Prosecutors said she was assaulted by Jesmer last year while he was serving as a pastor at the Dialogue Church in Manchester.

This Channel 9 article (see link above) reported Jesmer's words at the sentencing, which were as follows:

"I'm terribly sorry," I certainly didn't set out to hurt anyone, but I know I've destroyed people's lives."

"I'm beyond sorry and would do anything to take that day back. You deserve better. Your family deserves better. I should have known better."

Apparently, the Judge explained that he was hesitant to accept the plea deal, but he allowed it to spare the victim of further pain.

The Union Leader provided some additional information about the sentencing. (see below)

Jesmer, 38, was the pastor of the Dialogue Church until last summer, when fellow church leaders heard about the allegation and contacted authorities. He was arrested last August and was free on bail until his court appearance on Tuesday.

“My concern was her (the victim’s) well being and not having to go through a trial,” Valentine said.

He said about 10 to 15 members of the church were present during the hearing. Jesmer was convicted under a provision in the state’s rape law that prohibits sexual conduct by a person who has authority over another.

According to previous news accounts, the assaults took place in the church office. The girl repeatedly refused but agreed after fearing she had angered Jesmer.

Jesmer’s wife was in court during the sentencing.

Another source (www.nh1.com) reported quite a few additional details about the case. Here are some of them.

The victim admitted that for months after the attack she would take half hour long showers saying, "I scrubbed myself until I bled."

She said in the months and weeks leading up to the assault, Jesmer and his family supported her. She said she was going through a rough time, and he was there for her when she wanted to commit suicide. During that time, he came to visit her or drive her to the church every day. The victim said she was making great progress until the sexual assault and she hit "the lowest point I could reach."

"I can admit that I’m broken," she said through sobs.

Despite all this, she said she forgives Jesmer.

"You made a mistake just like every other human," she said. "I don’t want to hold any resentment toward you because that’s not what God wants."

Jesmer reacted by putting his head down and he appeared to be crying.

"I pray for you and your family’s healing daily," the victim said, recognizing that it has affected her and his family.

After the victim spoke, Jesmer was given an opportunity to address his victim, her family, and the judge. He admitted that he destroyed several people's lives by making this terrible decision. He then stated:

"I’m very sorry. I thank you for your forgiveness. I don’t deserve it," Jesmer said to the victim and her mom. "I failed you. I failed my city and my church."

According to the nh1.com report:

Superior Court Judge John Kissinger praised the victim saying she showed incredible strength, courage and bravery. Speaking directly to her he reminded her, "There is nothing you did that remotely contributed to or caused this."

Kissinger also spoke to Jesmer, saying although he has supported the resolution, he has some serious reservations about the light sentence, saying Jesmer was in an authoritative position as a pastor and should have been a support system.

"The reality is, I would not have accepted this but for the support of the victim’s family because I think prisons exist for a reason," Kissinger said. "The reason is to isolate those who are the most dangerous. And anyone who would act as a predator with a child is someone who needs to be removed and isolated from society."

At a plea and sentencing hearing at Hillsborough County Superior Court North on Wednesday morning County Attorney Michael Valentine described the facts of the case to the judge.

You can read those details here.

The Granite United Church, which is a multi-site church, includes the Manchester, New Hampshire location on its website.

It is frightening just how quickly the lives of a pastor, a victim, a pastor's wife and children, congregants, and a community can change forever because of sexual sin. Steve Jesmer went from being a dope dealer to a hope dealer to a prisoner whose name will remain on the sex offender registry for the rest of his life.

May Steve Jesmer and each of the individuals he hurt be brought closer to the Lord in the midst of their tremendous pain. Please join Dee and me in praying for them.