"For giveaways and welcome gifts for visitors, prioritize brief and readable books than tracts. So many people I've known have come to faith though [sic] The Cross Centered Life by C.J. Mahaney, or What is the Gospel? by Greg Gilbert." 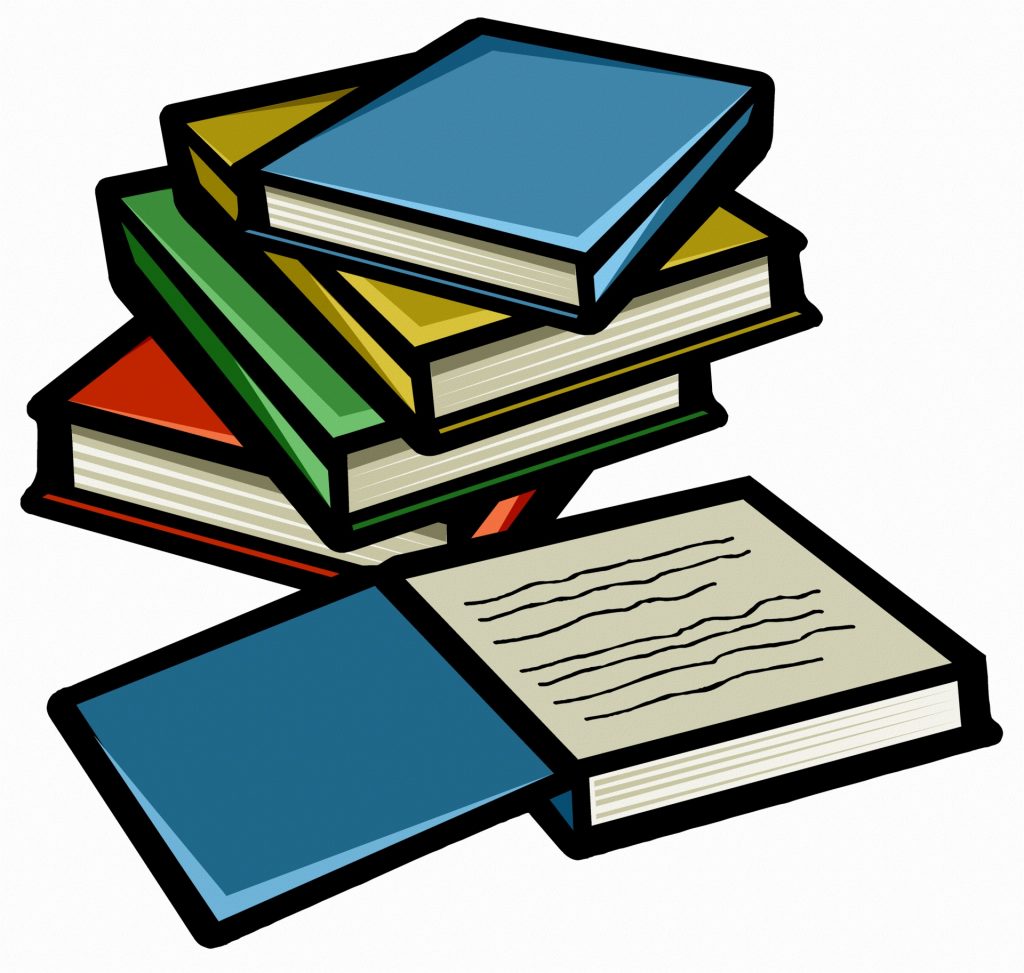 A Pile of Books

As I begin this post, I'm having a flashback to January 25, 2009. It was on that Sunday morning that Dee and I ventured into a Sovereign Grace church in our area to hear a guest preacher named C.J. Mahaney. We had come across his name as we began to do internet research during the previous fall.

Both of us had read the Young, Restless, Reformed article that appeared in Christianity Today (September 2006), but we had never heard of several of the individuals that were highlighted, including C.J. Mahaney. Here is the paragraph in which his name is mentioned:

For [Joshua] Harris, things started changing when he read Piper describe God's glory and breathtaking sovereignty. Later, C. J. Mahaney, a charismatic Calvinist and founding pastor of Covenant Life, took Harris under his wing and groomed him to take over the church. Mahaney, 51, turned Harris on to his hero, Charles Spurgeon, the great 19th-century Calvinistic Baptist preacher in London. Mahaney assigned him a number of texts, such as Iain H. Murray's Spurgeon vs. Hyper-Calvinism. "I would have been reading Christian comic books if left to myself," Harris told me, flashing the characteristic self-deprecating humor he shares with Mahaney.

As we read the 'survivor' testimonies of people who had been members of Covenant Life Church (where Mahaney had pastored for 27 years) and other fellowships in the 'family of churches' known as Sovereign Grace Ministries (SGM), we wondered whether these accounts were true. Those who posted on SGM Survivors and SGM Refuge sounded so believable. Dee and I decided to go and hear the president of SGM (Mahaney) in person to gain a better understanding. Keep in mind that this was nearly two months before we launched our blog. (True confession…at the time, I wasn't sure whether we would ever become bloggers. Would anyone want to read our posts? Not only that, was there enough to write about several times a week?)

I will NEVER forget what I saw as Dee and I walked through the front door of that Sovereign Grace church. Prominently positioned in the church lobby was a bookstore! I wish I had taken a picture. We spent a couple of minutes browsing the selection of books that were for sale. No doubt our regular readers know the titles well. Some of the authors included . . . Mahaney, Dever, Mohler, Grudem, Piper, etc. When I spotted the cash register, it appeared to me that the money changers had invaded the temple.

Dee and I were handed a welcome packet, along with one of Mahaney's books. We were given the option of The Cross Centered Life or Humility: True Greatness. Dee and I chose the latter. Not long before this I had been organizing the bookshelf in my den, and I couldn't believe it when I spotted Mahaney's The Cross Centered Life. Where did that book come from? Then I remembered that several years earlier I had purchased it at LifeWay (around the time that it came out). There had been a display of Mahaney's book at the front of the store, and I bought it strictly because Al Mohler endorsed it. It was around that time that I drove out to Southeastern Baptist Theological Seminary to hear Mohler deliver the chapel message. Afterwards, I even shook his hand.

Getting back to our church visit, Mahaney delivered one of his canned sermons called "Cravings and Conflicts". He spent so much time talking about the Duke/Maryland game he had attended the day before that he had to rush through his message. On the church website, they ended up substituting Mahaney's sermon at another church for the one we heard.

Based on a recent post on the 9Marks website, there is a strong possibility that what Dee and I experienced eight and a half years ago will become the modus operandi of Calvinista churches.

Here is what caught our attention in a post written by Mack Stiles (see screen shot below):

I am reminded of our friend in Dubai, Todd Wilhelm, who a number of years ago was approached by leaders in his church about managing the books being made available to congregants (I assume for purchase). Todd explained to them that he could not in good conscience promote Mahaney's books. In short order Todd was informed that he was not the right man for this responsibility. Not long after, Todd and his wife submitted their letter of resignation from the church. Were the Wilhelm's names promptly removed from the church roll? Not on your life! We have previously written about Todd's frustrating experience trying to have his name removed from the church roll, which finally happened months later.

I find it incredible that so many people Mack Stiles knows have purportedly come to faith through Mahaney's book The Cross Centered Life. I resolved to read it and wrote a two-part review with my observations and concerns (see links below).

The other resource Stiles mentioned was written by one of Mark Dever's disciples, Greg Gilbert, who pastors the Louisville church that Mack and his wife have joined. Shhh!!! Don't let the cat out of the bag that the Stiles are now stateside. Apparently Mack and his wife don't want it to become public knowledge that they are no longer living in Dubai.

Ever since we started blogging, we have been pointing out the Calvinistas' obsession with books and conferences, and over time it has only gotten worse. Now we have someone like Mack Stiles instructing congregations to purchase books to hand to visitors. Why not invest in a stack of Bibles and make them available to those who might not own one? It's a tragic day in Christendom when Mahaney's little book takes precedence over Almighty God's 66 books. 🙁

Make no mistake, the Calvinistas don't want anyone calling attention to their book-selling schemes. We discovered that recently when Joe Carter's Beware of Broken Wolves post appeared on The Gospel Coalition website. Someone questioned whether he was talking about The Wartburg Watch in his 'Broken Wolves' post. Carter made it clear that he was not talking about our blog, but when Joe re-read someone's comment and saw our blog's name "The Wartburg Watch", it caused a swift and negative reaction (see screen shot below). 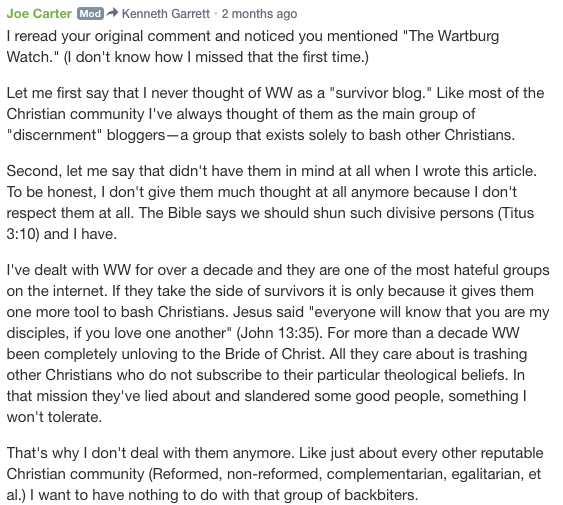 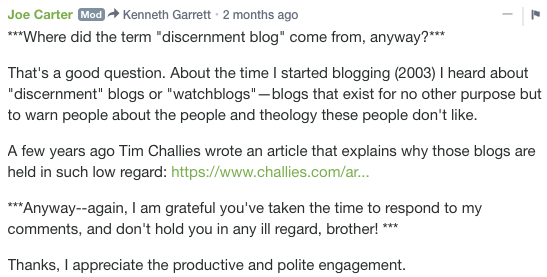 The Tim Challies article that Joe Carter cited in the comment above was entitled In the Crosshairs of Discernment Bloggers, and it was published on April 3, 2013. Here is a portion of what Challies wrote (see screen shot below): 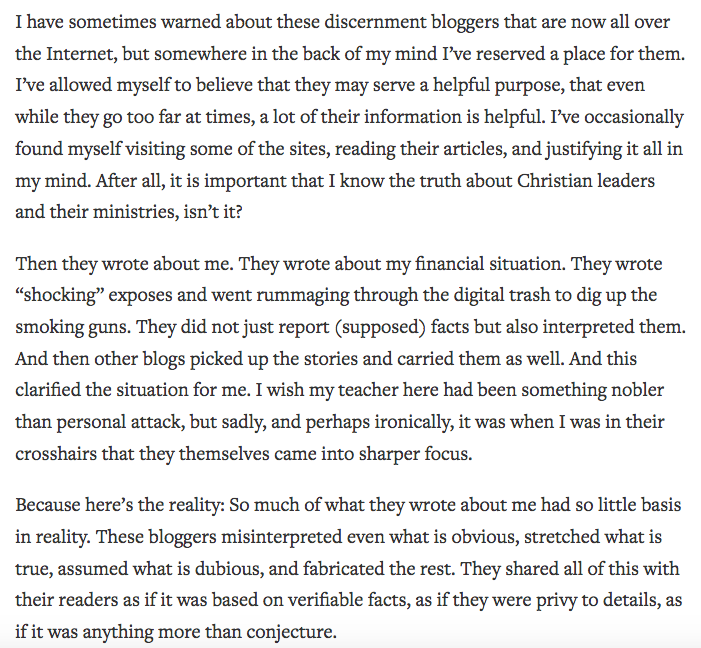 When one reads Tim Challies' post, can there be any doubt that he was responding to a post that I had written just a month earlier? My March 3, 2013 post was entitled Tim Challies / Cruciform Press in our 'Cross' Hairs.

Rest assured that in the post title I was using a play on words. Apparently, it got to both Tim Challies (shortly after we published the post) and to Joe Carter (who four years later still remembers his buddy Tim's post and provided a link in his comment).

Apparently, we weren't supposed to bring up Cruciform Press or Tim Challies' connection to Mahaney.

Years later, it is becoming even more apparent that the Calvinista movement is built on leaders who crank out books and distribute (SELL)  them in various ways from bookstores at conferences, to online bookstores, to on site bookstores (in churches). And now those distribution outlets (err churches) are being urged to stock up on books like Mahaney's Cross Centered Life to give away to visitors. Is that really a good use of church funds? Recently, I heard Mark Dever state in an audio clip that he gives away books every week to those attending his church.

So the serious question is — do you want your contributions being used to buy books like The Cross Centered Life to give away to visitors?