"If there is a flaw or a weak point to this book, it may be that its focus is more on today than on yesterday and tomorrow. This is to say that Hansen takes the reader through many of the current hot spots in this movement and shows how it has propagated itself, but he invests far less time showing how this movement grew up and predicting where it may be going." 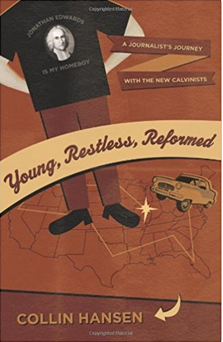 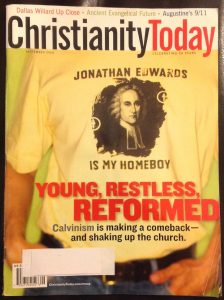 The first time I heard the phrase "Young, Restless, Reformed" was in the fall of 2006. I had just received the September issue of Christianity Today, and there adorning the cover was a T-shirt lauding Jonathan Edwards (Sinners in the Hands of an Angry God – sermon transcript) and blazing red words boasting about a resurgence of Reformed Theology (aka Calvinism). I have kept this issue for reference and am including a photo of it for those who may not have seen it.

Collin Hansen, who at the time was serving as an Associate Editor at Christianity Today, wrote the article after traveling around the country visiting with pastors, theologians, and parishioners in the Reformed camp. Hansen himself is part of this younger sect — he was just 25 when he wrote this YRR piece. He now serves as editorial director for The Gospel Coalition, a position he began in July 2010. 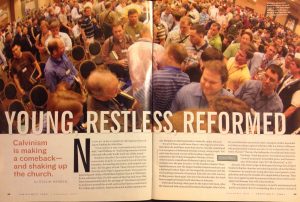 To understand the premise of Hansen's article, one need only take a look at the two-page spread pictured on the right. There you see John Piper (positioned just above the word 'RESTLESS') standing in a sea of predominantly young men. These 'Christian Hedonists', as Hansen described them in the article, were flocking around Piper for a once in a lifetime chance to meet him at the first ever Together for the Gospel conference earlier that year (April 2006) in Louisville.

In his CT article Young, Restless, Reformed: Calvinism is making a comeback–and shaking up the church, Hansen wrote:

Already, this latest surge of Reformed theology has divided Southern Baptist churches and raised questions about the future of missions. Its exuberant young advocates reject generic evangelism and tout the benefits of in-depth biblical doctrine. They have once again brought the perennial debate about God's sovereignty and human's free will to the forefront.

While we take issue with much of what Hansen shared in his YRR piece, we agree 100% with his remark about Reformed theology dividing Southern Baptist churches. If you have been reading here for any length of time, you know that this has been one of our hot button topics.

The following year Collin Hansen wrote an article for Christianity Today entitled Pastor Provocateur. I remember reading that one too and knew nothing about Mark Driscoll except that he was the pastor of some church in Washington State called Mars Hill. That would soon change…

For the remainder of the post, we want to focus on Collin Hansen's book Young, Restless, Reformed: A Journalist's Journey With the New Calvinists, which not surprisingly was published by Crossway in March 2008, a few weeks before the second Together for the Gospel conference. We wonder how many T4G attendees purchased Hansen's book (pictured at the top of the post).

During the fall of 2008 I remember listening to someone (can't remember who) on Christian radio interviewing Collin Hansen. Dee and I had just begun researching this movement, and anything we heard or read about YRR peaked our interest. At the time, we had no way to address our concerns publicly because we had not yet launched TWW. In fact, during this time we weren't sure our blog idea would ever become a reality.

In order to understand the outline of Collin Hansen's book, here is what someone shared in an Amazon review:

If you're familiar with Lee Strobel's investigative "Case for…" books, Young, Restless, Reformed (YRR) almost seems like a knockoff. In YRR, journalist Collin Hansen treks across the United States interviewing different folks as he attempts to discover whether his perception of a resurgence in Reformed theology among young Christians is, in fact, a new wave within American evangelicalism (pp. 13-14).

Hansen interviews several key pastors/theologians including John Piper, Al Mohler, Joshua Harris, Mark Driscoll, C.J. Mahaney, Mark Dever, Ligon Duncan along with lay Christians and concludes that the Calvinist comeback is for real and widespread among 20- and 30-somethings – marking a generational dimension. (As an aside, the Reformed theology and Calvinism to which Hansen refers is primarily the TULIP variety and not the more comprehensive version that includes Covenant theology, pedobaptism, etc.)

Tim Challies, who has probably written more Amazon book reviews than almost anyone on the planet, offered this glowing review of his buddy's book. (See screen shot of an excerpt from Challies' review below)

I recently came to own a copy of Young, Restless, Reformed because I was ordering several used books online – one being the hilarious children's book A Long Way From Chicago by Richard Peck, and another being a Paula Deen cookbook. If I purchased a total of four used books, I could get the fourth one FREE (as well as free shipping on all four books). As I scrolled through the books being offered, I suddenly saw Hansen's book and couldn't pass up the opportunity to get it without spending a dime. 🙂

Since I had never read Hansen's book Young, Restless, Reformed, I couldn't wait to see which New Calvinists he interviewed as he trekked around the country. After discovering which ones he spotlighted nine years ago, I wanted to retrace Hansen's footsteps and give our readers an update on where some of these SUPERSTARS are now…

When Hansen's book was published, John Piper was the pastor for preaching and vision at Bethlehem Baptist Church, where he had served since 1980. Four years ago he decided to retire and preached his final sermon on March 31, 2013 (Easter Sunday). He continues to speak at Passion Conferences, where he gained much popularity with young folks (primarily college students), as well as other conferences geared toward Calvinists such as Together for the Gospel, The Gospel Coalition National Conference, among others. He continues to be involved with his Desiring God ministry, which he founded, serves as Chancellor of Bethlehem College and Seminary, and he Tweets up a storm! Looks like there's no slowing down during his retirement years.

Collin Hansen titled the chapter on the flagship seminary of the SBC Ground Zero for the Young, Restless, Reformed movement, and that continues to be the case. He provides a brief history of how Al Mohler came to be seminary president at the young age of 33. While there he took a tour of the pristine campus and got a history lesson from Tom Nettles. In this chapter he discussed Calvinism and missions. In the intervening years Southern Seminary has become known for its staunch stand for Reformed Theology. The Together for the Gospel conference is held in Louisville, and students are encouraged to attend and offered court credit opportunities if they do so. There's your built-in audience…

I couldn't believe my eyes when I saw the title of the chapter that discussed C.J. Mahaney and Covenant Life Church (CLC). It was "Drug-Induced Calvinism".  Now that's a spin on Calvinism I have never heard before. As Collin Hansen explains how CLC began, he writes:

Oh really??? I thought CLC (formerly called "Gathering of Believers") was co-founded by Mahaney and Larry Tomczak. Now I see where some of the confusion originated.

In this chapter Hansen wrote:

C.J. Mahaney gave me the most difficult interview of my career thus far… He wouldn't stop asking me questions. (p. 96)

Hansen explained that he was finally able to ask Mahaney his one big question (see below):

How in the world do you explain the anomalous blend of Charismatic practice with Calvinist soteriology (salvation theology)? (p. 98)

This could be the fruit of my pre-conversion, drug-induced state. (p. 98)

A word to the wise… Don't go looking for C.J. at Covenant Life Church because HE"S NOT THERE! Mahaney, along with some of his closest friends and family, moved the headquarters for Sovereign Grace Ministries (which had been housed at CLC) and themselves to Louisville, Kentucky in 2012 for 'economic reasons' and to be at ground zero for the Young, Restless, and Reformed movement. Due to some of his purported attitudes including "various expressions of pride, unentreatability, deceit, sinful judgment and hypocrisy", Mahaney should have been disciplined by church leaders. Instead, he ran to Mark Dever's church to escape the treatment he so readily gave others who 'fell into sin'. CLC is now a skeleton of its former self because so many members have left. The church 'Mahaney founded' (according to Collin Hansen) withdrew from Sovereign Grace Ministries, and now this church-planting group is called "Sovereign Grace Churches (SGM)". Mahaney, who had been SGM president, now pastors Sovereign Grace Church in Louisville and occasionally speaks at conferences. He and other colleagues were named in a lawsuit several years ago, which was dropped on a technicality.

The author of the book "I Kissed Dating Goodbye", which topped the charts in 1998, Joshua Harris, was hand-picked by C.J. Mahaney to become his successor at Covenant Life Church. Harris moved from Oregon to Maryland, living in the Mahaney's basement the first year. Over the years Harris was groomed to become senior pastor of Covenant Life Church, and that transfer of pastoral authority took place in 2004. Years earlier Harris began New Attitude Conference which became quite popular with young people. That conference ran its course and came to an abrupt end. Also, in January 2015 Harris resigned as Senior Pastor of CLC to attend seminary. He has been keeping a low profile since then.  Other Christian leaders were discussed, in this chapter, but Harris has the most name recognition.

And last but certainly not least, there's the founding pastor of Mars Hill Church, Mark Driscoll. According to Hansen, Driscoll has a 'missional mind-set'; however, we all know the rest of the story…

While in Seattle, Collin Hansen attended a Boot Camp as well as a Sunday service. The day Hansen visited, Driscoll did not preach. Instead…

he opened his pulpit to Bruce Ware, professor of systematic theology at Southern Baptist Theological Seminary

Ware had flown out to Seattle to lead a Resurgence Conference. There is so much we could say (and have said) about Mark Driscoll and is antics.

Then in 2014 Mark Driscoll Resigned from Mars Hill Church after nearly 20 years as founding pastor. At the end of 2014 the unthinkable happened — Mars Hill closed its doors forever.

Dee and I have written extensively on most of these individuals and institutions that Collin Hansen praises. In a mere nine years, some dramatic changes have taken place in the Neo-Cal world. When will we ever learn to keep our focus on Christ alone?