“In a Christianity Today article titled, ‘A Jesus for Real Men’, Driscoll is quoted as saying that ‘real men’ avoid the church because it projects a ‘Richard Simmons, hippie, queer Christ’. However, according to Driscoll, ‘real men’ – like Jesus, Paul, and John the Baptists – are ‘dudes: heterosexual, win-a-fight, punch-you-in-the-nose dudes’. The article states this is the sort of Christ men are drawn to – what Driscoll calls ‘Ultimate Fighting Jesus’.  link 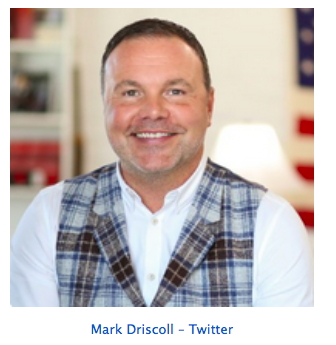 I was pleased to see that a woman wrote this article, erroneously believing that she would get the gender/sexuality problems with Driscoll's ministry. I was wrong. His misogynistic views on women were legendary. She, on the other hand, wrote a mediocre, *it's all good*, post. But, then again, TGC wouldn't let her really describe what happened because many of the boyz were complicit in letting an abusive and sinful situation last for a long time.

Most anyone who followed the Driscoll fiasco knows of the incredible number of problems which he caused. No walking in the footsteps of the loving Carpenter for this dudebro.

Lots of people were hurt.

I totally agree with the following statement.

The collapse of Mars Hill released a tidal wave of hurt, disillusioned people. Many quit Mars Hill; some quit church or Christianity altogether. Hundreds limped into other area churches, asking about church bylaws and pastoral pay structures before even introducing themselves.

This part of the post was helpful. It discussed how former Mars Hill members who showed up at other local churches had suspicions about how churches are run. They asked questions about pastors' salaries and church bylaws. TWW hopes they never, ever stop asking questions like this. Driscoll made a lot of money in his time at Mars Hill and very few questions were asked about where all the money went.

This is deeply concerning to us. Here is one pastor's take on it.

Folks coming from Mars Hill have been well taught,” Sinnett said. “They have a basic understanding of the gospel and what it means to live on mission. They have a real heart for their city, and what it looks like for a husband to lead his family spiritually. A lot of those big rocks were in place.”

Think about this, folks. These poor people, who were taught by Driscollm understand the gospel™?!  This probably means that they are Calvinists and complementarian which is defined as a husband leading his family. The women, as usual, is not worthy of being mentioned. Forget about single people as well.

Janet Mefferd and I were discussing some of the so called *teachings* of Driscoll and had a good time remembering lots of issues.

1. These people learned that their leader had visions of people having sex, aka pornovision, and they were told that this was gift of discernment.

2. They learned that Queen Esther of the Bible was a slut because Driscoll's teen daughter told him she was.

3. The infamous Song of Solomon sermon.

Folks, this was so bad it was removed from the websites. We even did Scriptural analysis of his ridiculous exegesis

4. Christians who want to do word studies of thee Bible are rebellious.

Mark Driscoll: Only Rebel Christians Do Word Studies. So, Rebel!

A number of people claim that Driscoll did not leave due to sexual sin just some mistakes. In certain circles, sexual sin is limited to adultery. However, sexual sin can involve a lot more than just the act of sex.

Here is a post 4 Awful Things Pastor Mark Driscoll Has Said Besides Calling Women “Penis Homes”. I contend that Driscoll had, and may still have, a problem with sex. Sadly, he made his problem the problem of his congregation that had to listen to him.

7. Driscoll plagiarized quite a bit of material. Janet Mefferd called him on it and The Gospel™ Coalition boyz called for a boycott of Mefferd. They have never apologized even though Mefferd was 100% correct.

The sad part of this is that Justin Taylor of TGC told people to boycott Janet because she confronted Driscoll.  You can find lots of posts on the myriad of citation problems with Driscoll's books at Warren Throckmorton's website here.

8. Driscoll showed a profound ignorance on the application of church discipline.

Here is one example. Mark Driscoll’s Mars Hill-A Tutorial on Spiritual Abuse.
There are plenty more where that came from.

Driscoll held demon trials in his church which were deeply disturbing to the people involved.

10. Are these mistakes or are people afraid to use the word *sin?*

See what this commenter had to say. Mark didn't sin. He made *mistakes.* Those who exposed the *mistakes* are the real sinners.

Pastor Mark's teaching has greatly impacted my life. I am encouraged to see many positive things and spiritual growth come even from such a painful time for that church community. I would love to see a follow up story, showing God's healing and renewing based on what God is doing through Pastor Mark's church, Trinity in Phoenix. We serve a God that is far greater than our mistakes.

We leave you with a number of comments that Driscoll made over the years. We put a lot of work into the "Did He Stutter" post. We think the words speak to the character, or lack thereof, of Mark Driscoll. There is so much more to write about like his threats to beat up his elders or driving his bus over those who were not on board with him but we would be here all night.

So why was this posted at The Gospel Coalition?

TGC has never acknowledged their role in propping up Mark Driscoll. Justin Taylor has never apologized for his rants against Janet Mefferd. John Piper was one of Driscoll's lap dogs, complimenting his theology and sermons. Sadly, it was those outside of TGC who stood up against the sinful goings on with Mark Driscoll.

It looks like the people of Mars Hill know how to give money. Maybe that is why they are valuable to TGC and friends. It usually is about the Benjamins.

In addition, “you don’t have to persuade them that giving is a good, mature, and holy thing to do,” Braga said. “You aren’t fighting some funky theology. You’re fighting really good theology that went in weird ways in certain contexts.”

No, these folks have not been exposed to good theology and shame on those in the TGC who played along with Driscoll for years while insulting those who were trying to get the truth out there.