"Four years ago, Mars Hill Church in Seattle seemed too big to fail…Then, in a few breathtaking months, the whole thing collapsed." 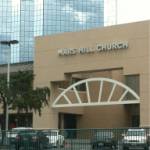 Looks like Mars Hill Church is gone but not forgotten, at least not by The Gospel Coalition. Yesterday TGC featured an article by Sarah Eekhoff Zylstra entitled Seattle Reboot: Life After Mars Hill. Sarah, who writes not only for The Gospel Coalition but for Christianity Today, provided the following introduction:

Just 17 years old, the church was drawing an average weekly attendance of 12,329 to 15 locations. In fiscal year 2013 alone, Mars Hill baptized more than 1,000 people, planted 53 churches in India, and supported 20 church planters and evangelists in Ethiopia. It released 50 new worship songs, gave away more than 3,000 Bibles in the United States and Ethiopia, and took in nearly $25 million in tithes and offerings.

Then, in a few breathtaking months, the whole thing collapsed. Founder and lead pastor Mark Driscoll’s bent toward the provocative, which was part of his draw, increasingly came under fire, fanned by a series of controversies.

Driscoll announced he was taking a break in August 2014, then resigned less than two months later. By the end of October, lead preaching pastor Dave Bruskas announced the whole thing was shutting down.

In short order this article was being discussed in social media via Tweets and Facebook posts, as well as on other websites (more on those later). So far this post on TGC's website has garnered over 50 comments, which is significant. Often, TGC posts don't get any comments at all. We do wonder whether all the comments are being published. If any of our readers post a comment that fails to make it out of moderation, please let us know.

If you are not that familiar with Mark Driscoll's involvement with The Gospel Coalition, you should know that he was a founding Council Member. Here is what Mark said on March 28, 2012 (see screen shot below): 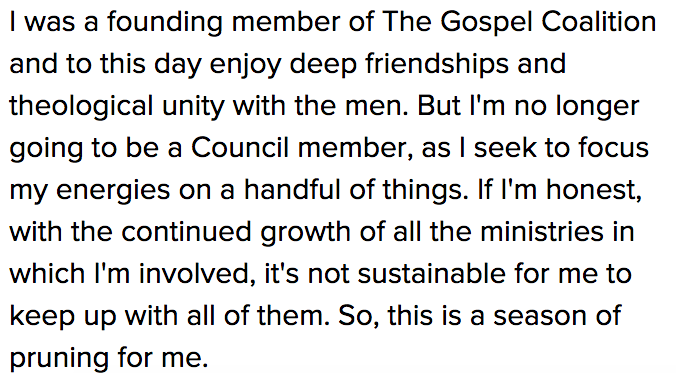 I will never forget that just a couple weeks after Dee and I launched our blog, The Gospel Coalition held is National Conference in Chicago. Mark Driscoll was one of the speakers, and his message was entitled Rightly Dividing the Word of Truth. It's perplexing that his message no longer appears in the list for the 2009 conference.

Even though Driscoll hasn't been affiliated with The Gospel Coalition for the last five years, TGC continues to archive his messages.

It must have been hard Driscoll's colleagues in The Gospel Coalition, particularly its co-founder Don Carson, to see Mars Hill Church collapse as it did? How could this work of God fall into ruin? After all, 'Dr. Don' invested in Mars Hill Church through his teaching (see screen shot below). 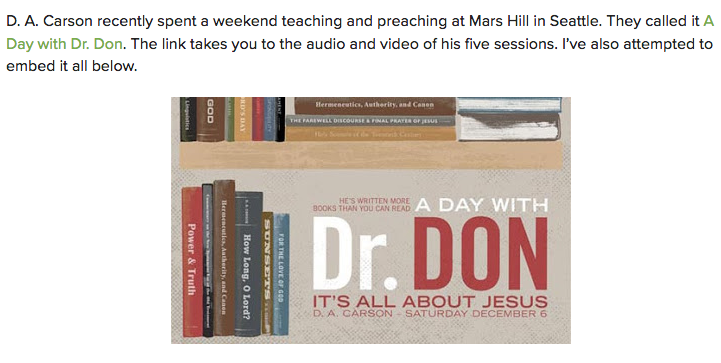 Getting back to TGC's article on Mars Hill Church, some commenters thought the summary was too brief, some thought it was too detailed, and some thought it was just right. As far as Dee and I are concerned, we believe all the article did was open a can of worms.

Wenatchee the Hatchet (WTH), who has done a yeoman's job over the years covering Mars Hill Church and Mark Driscoll, has written a couple of posts in response to this TGC post.

Wenatchee makes the point in the above post that the collapse of Mars Hill was at least two years in the making, NOT a few months, as Sarah's article indicates!

Warren Throckmorton, who has also covered Driscoll and his now defunct church over the years shared his thoughts in a post – Reflections on TGC's Life After Mars Hill Church.

Way back in 2007 Justin Taylor reported on Mark Driscoll's confession of pride. Taylor's post, which is still available on TGC's website, includes a transcript of some of Driscoll's remarks in a sermon he delivered on November 4, 2007. (see screen shots below) 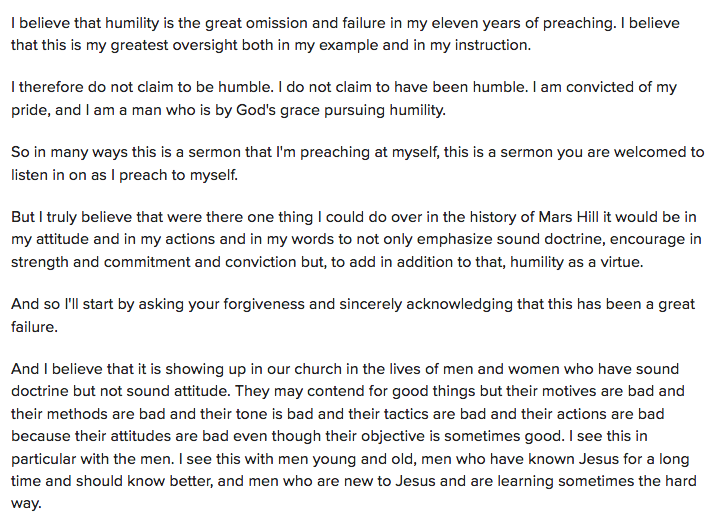 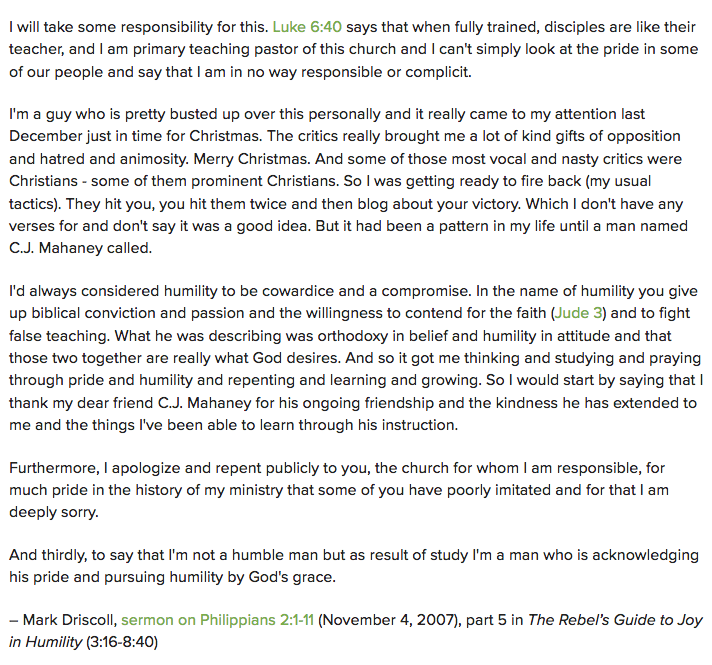 It's a crying shame that Driscoll didn't stay true to his word (cited above) and that his Gospel Coalition colleagues didn't hold him accountable. So many in the body of Christ have been hurt!

So what was the purpose of this recent TGC article on the aftermath of Mars Hill Church? It seemed to come out of the blue…

According to her Linked In Profile, Sarah Eekhoff Zylstra (who is a Contributing Editor for Christianity Today International) describes her position this way:

I report on anything they ask me to, for print in their flagship magazine or for online publication. Sometimes I have weeks to work on a story, and sometimes only hours. Sometimes the work is national, and sometimes I call overseas. It's always challenging and interesting.

Is that what she was doing here as a Senior Writer for The Gospel Coalition — reporting on anything they ask her to? The question that must be asked is…

Why now? After all, Mars Hill Church closed its doors in December 2014, almost 2-1/2 years ago. Stay tuned for Dee's follow-up post on Friday.

In the meantime, we would love for you to share your thoughts on TGC's Seattle Reboot: Life After Mars Hill article.