“If the cost of saving a marriage is destroying a woman, the cost is too high. God loves people more than he loves institutions.” 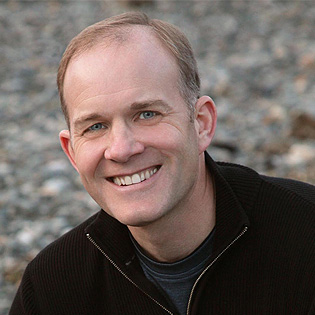 I will never forget the email we received from a sister in Christ who was emotionally distraught due to a conflict with her younger brother.  This woman, who found herself in an abusive marriage, escaped the terrible pain and suffering she had endured by getting a divorce.  In the wake of that devastating experience, she met and married a Christian man who loves and cherishes her.

The brother, who had recently been awarded an M.Div. from a Southern Baptist seminary, mailed a packet of information to his sister.  It contained a lengthy paper written by John Piper.  As you probably guessed, the brother (now a pastor) warned his sister that she MUST return to her first husband or she would be living in sin.  That's when this sister reached out to us to get our advice on how to deal with her brother.

We immediately put our research skills to work and Googled John Piper and divorce.  Gotta love the internet!  We first discovered a position paper by John Piper.  It seems to indicate that if a divorced person remarries, (s)he should remain with the spouse to whom (s)he is currently married (as indicated at the conclusion of the paper).

Has Piper's view changed since his position paper appears to contradict the mandate declared by the brother mentioned above?  It appears so because A Statement on Divorce & Remarriage in the Life of Bethlehem Baptist Church includes the following statement (see screen shot below).

The reason I share the above information is to demonstrate that there is a range of pastoral views regarding divorce.  Some pastors believe divorce is NEVER allowed, advocating ONLY for separation and then hopefully reconciliation.  Some permit divorce as a last resort, while prohibiting remarriage.  And there are a number of pastors who allow parishioners to divorce and remarry in certain circumstances like adultery and spousal abuse.

All of this serves as a backdrop to a blog post recently written by Gary Thomas entitled Enough is Enough:  Why the Church Has to Stop Enabling Abusive Men. 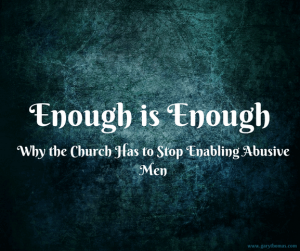 According to his website, Thomas "is a bestselling author and international speaker whose ministry brings people closer to Christ and closer to others. He unites the study of Scripture, church history, and the Christian classics to foster spiritual growth and deeper relationships within the Christian community."

As Thomas explains in his post, he recently spoke at a women's conference, and he believes it was a God-ordained experience.  He was shocked by some of the horror stories married attendees confided to him.

Here is what Thomas wrote (see screenshot below). 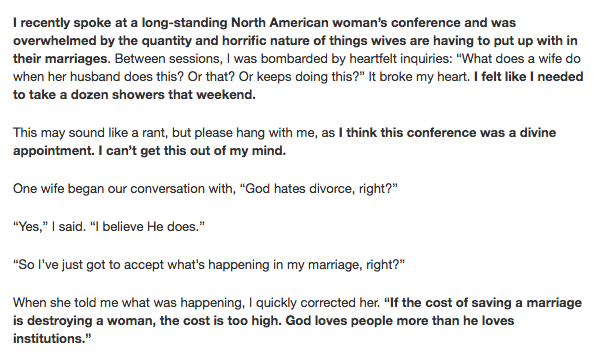 Another woman (in her twenties) shared with Thomas that her husband put her and her baby in danger by making them get out of the car on the highway!  He did later come back to get them.  🙁

Here is what Thomas wrote about such spousal abuse:

They had been married only three years and she had already lived through more torment (I’m not telling the full story) than a woman should face in a lifetime. My thoughts weren’t at all about how to “save” the marriage, but to ease her conscience and help her prepare for a new life—without him.

Then he makes his feelings about this situation perfectly clear (see screen shot below).

Gary Thomas explained that he was so upset after hearing these horror stories that when he got back to his hotel room he wanted to vomit.  My first thought upon reading the above statement was… I wonder whether he has seen the following video:

No John!  If the husband physically abuses his wife, he has committed a crime and should be turned over to the proper authorities.

Getting back to Gary Thomas' post, there has been a HUGE response!  So far it has garnered 223 comments and has been shared on Facebook 58,600 times!   He has definitely got people discussing a very important matter that needs to be addressed openly and honestly.  Thomas concluded his post with these words:

I know I’m ranting. But I don’t think it was an accident that I was constantly stopped at that woman’s conference and forced to hear despicable story after despicable story (“forced” isn’t the right word. I could, of course, have walked away). I think God wanted me to see the breadth and depth of what is going on, and in this case, perhaps to be His voice.

I have read through all of the comments so far, and this one especially stood out to me.

Some of you may be familiar with Gary Thomas because of a book he wrote some years ago entitled Sacred Marriage.  Here is the premise of the book, as stated on Amazon:

Happy is good. Holy is better.

Your marriage is more than a sacred covenant with another person. It is a spiritual discipline designed to help you know God better, trust him more fully, and love him more deeply.  What if God’s primary intent for your marriage isn’t to make you happy . . . but holy?

Sacred Marriage doesn't just offer techniques to make a marriage happier. It does contain practical tools, but what married Christians most need is help in becoming holier husbands and wives.

One of the commenters had this to say about Sacred Marriage:

And another female commenter chimed in with this:

If Jill is correct in stating the church leadership is misusing Thomas' book Sacred Marriage to guilt wives into staying with their abusive husbands, then it might behoove Gary Thomas to do some digging to determine how prevalent this misuse of his book might be.  Perhaps it is occurring on a wide scale without his knowledge.

I would be remiss if I didn't acknowledge that men are not the only abusers in marriages.  There is no question that women are also capable of serious abuse, which tends to be verbal and emotional and less physical (although it does happen).

The bottom line is… we are very grateful to Gary Thomas for daring to discuss the topic of spousal abuse.  It has been suppressed for far too long, and we need to bring it out in the open.  Acknowledging that it exists is extremely healthy!  We hope Gary will continue to explore this most important topic and write more blog posts on it.  Maybe he could even publish a book that addresses it head on!