"Your calling as pastors is to give the Bible functional authority in every tweet, blog, sermon, and bedside prayer." 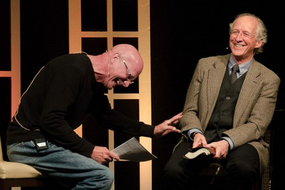 The following announcement was made earlier today via Twitter:

I plan to listen to several of these messages and hope to share with our readers some of what was presented.

Our friend in Dubai, Todd Wilhelm, took notice of this conference and the most renowned speaker – John Piper.  Todd has brilliantly put together some information that we believe calls into question whether Piper should be modeling 'functional authority".  We are grateful to Todd for allowing us to republish his thought-provoking post (see below).

“He had, in fact, got everything from the church and Sunday School, except, perhaps, any longing whatever for decency and kindness and reason.”

“Whatever difficulties he may have had with philosophy, Latin, and calculus, there had never been a time since the age of twelve when Eddie Fislinger had had difficulty in understanding what the Lord God Almighty wanted, and why, all through history, he had acted thus or thus.” 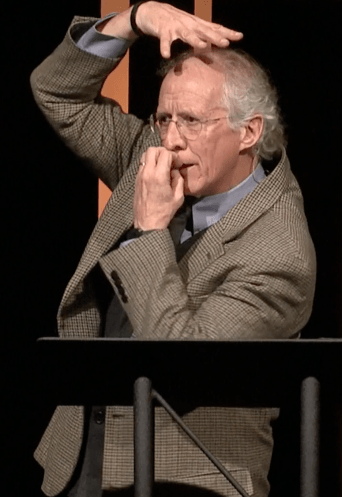 John Piper, not unlike the charlatan Elmer Gantry in Sinclair Lewis’ novel of the same name, has once again demonstrated a notable lack of any decency, kindness or reason. Piper chose to speak, along with C.J. Mahaney, at a Sovereign Grace event this week. C.J. Mahaney, a man credibly accused of blackmail and covering up the sexual abuse of children in Sovereign Grace Churches is a good friend of Piper’s. They  frequently speak at each other’s conferences, undoubtedly pocketing hefty honorarium fees in the process.  (Piper did not have to remove Mahaney from his Cross Conference in December, 2013, due to negative press, but I would guess Piper still paid Mahaney the honorarium fee, after all what are friends for?) Piper has yet to show any concern for the multiple victims of sexual abuse which occurred while his good friend, C.J. Mahaney was the Executive President of the Sovereign Grace denomination and senior pastor of Covenant Life Church.  Shortly after the sexual abuse scandal became public, Mahaney fled Covenant Life Church, temporarily seeking shelter with another supporter and fellow conference celeb, Mark Dever, at Dever’s Capitol Hill Baptist Church.  Mahaney, not one to be able to endure being out of the spotlight (nor the resulting cash) soon fled to Louisville to start a new church. Never one to start humbly, Mahaney took four other pastors with him – his son-in-law, his brother-in-law, and his trusty yes-men, Bob Kauflin and Jeff Purswell.  Initially they held services in a Christian school in Louisville, but when word of the sexual abuse scandal reached school officials Mahaney & company were given the boot. They quickly relocated to a hotel. Once Mahaney settled in he attempted to gain legitimacy by having all his famous friends stop by and preach. (Plus it gave a bit of a reprieve to the overworked pastoral staff of five.) Unfortunately, most of his friends were only too willing to lend their (good?) names to bolster the sagging reputation of Mahaney. 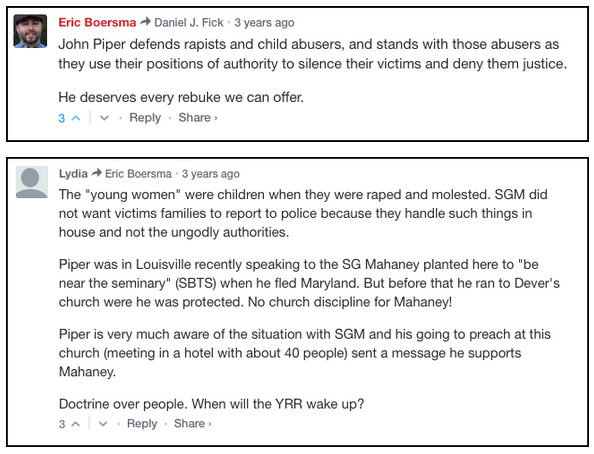 It should be noted that all the men who spoke at Mahaney’s church were unable to honestly claim ignorance of the sexual abuse scandal and Mahaney’s cover-up. Brent Detwiler had emailed all of them  detailed information on the subject. Detwiler deserves most of the credit for bringing this scandal to the light of day. His was a largely thankless task resulting in him being excommunicated and having the corrupt leadership of Sovereign Grace do everything they could to tarnish his name. Below is a partial copy of the post Detwiler wrote after John Piper spoke at Mahaney’s run-away church plant. 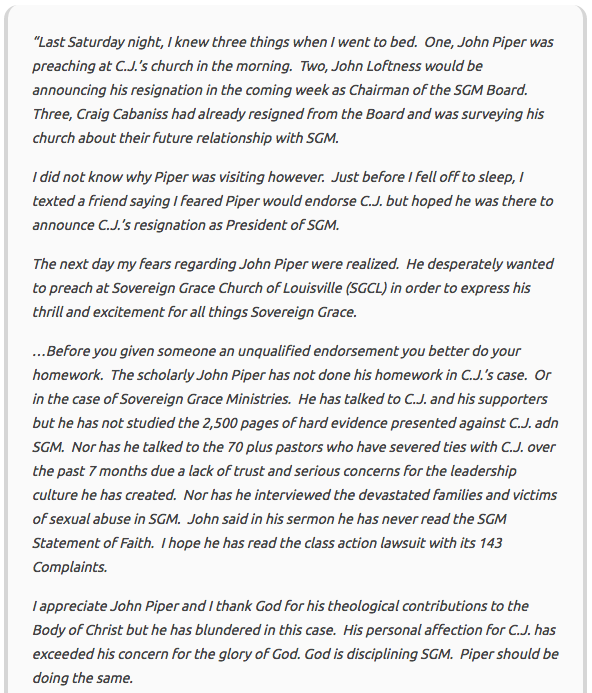 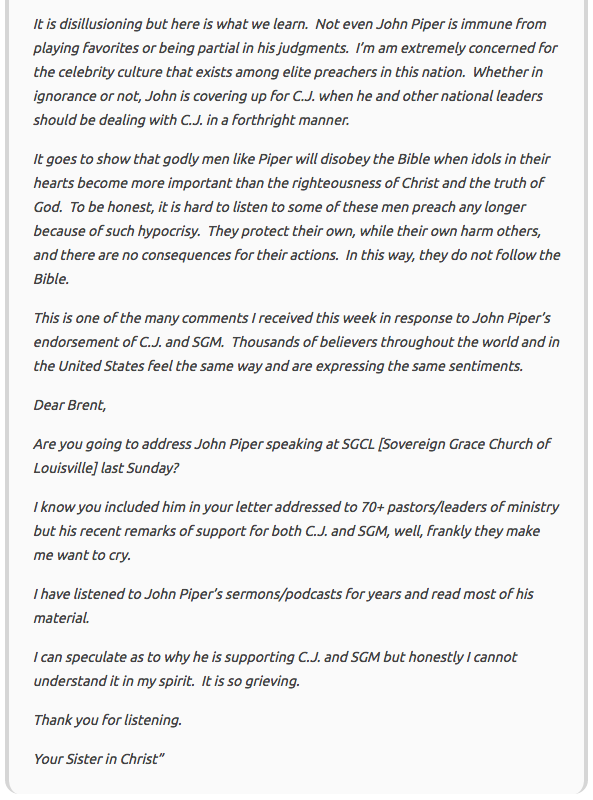 Below are the introductory comments of John Piper at Mahaney’s run-away church plant. Piper “chose” to speak there in February, 2013.

Below are some clips I culled from Piper’s sermon at the Sovereign Grace Churches Pastors Conference. Piper spoke on October 25, 2016, the entire sermon can be found here.  If you listen to the five minute clip below you will find that Piper speaks about giving the Bible “functional authority” in the believer’s life. He says one must analyze every thought that comes into your mind prior to speaking or writing a word. He suggests asking yourself two questions about the thought in your mind prior to expressing it- is there a passage in Scripture that supports the thought, and is there a passage in Scripture that is contrary to the thought? Piper claims these are his two sentinels which he has been utilizing for forty years. He further states that if your thoughts cannot pass these two “sentinels” then you do not speak it or write it.

It is my contention that John Piper is ill-suited to be teaching anyone on this subject.  His words, both written and spoken, frequently do not seem to pass muster of the “functional authority” he claims he has been giving Scripture for forty years. Below are just a few examples I came up with after having conducted minimal research. 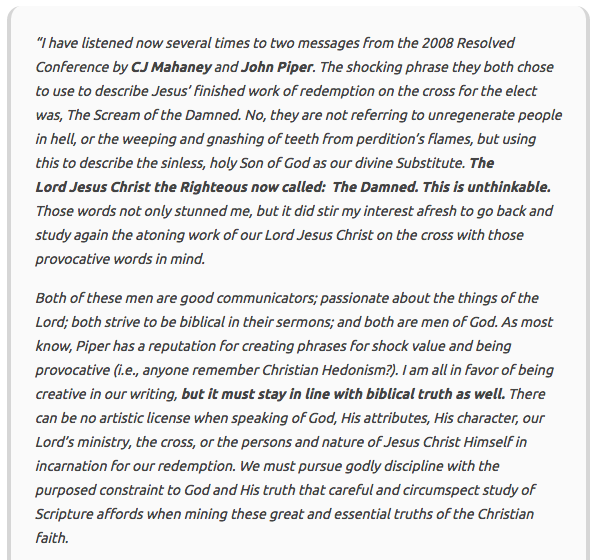 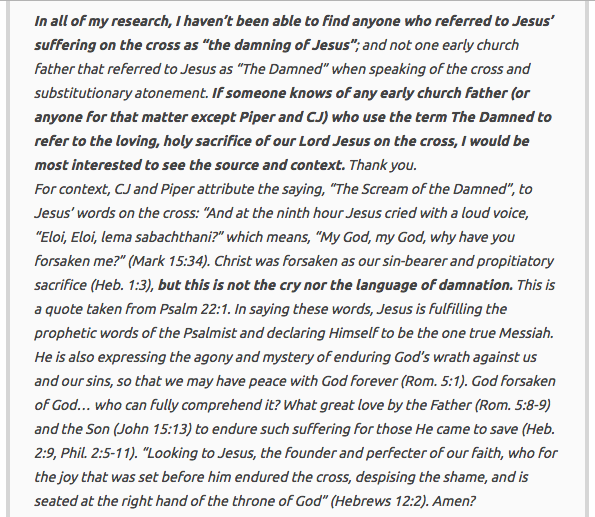 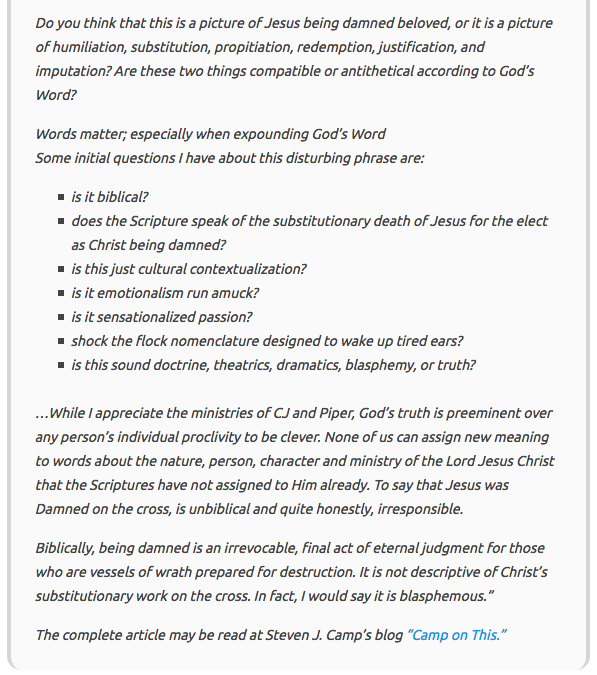 Here is the Camp on This link.

Tim Fall wrote an insightful article taking Piper to task for a tweet he wrote on the Ebola crisis. The complete article may be found here. 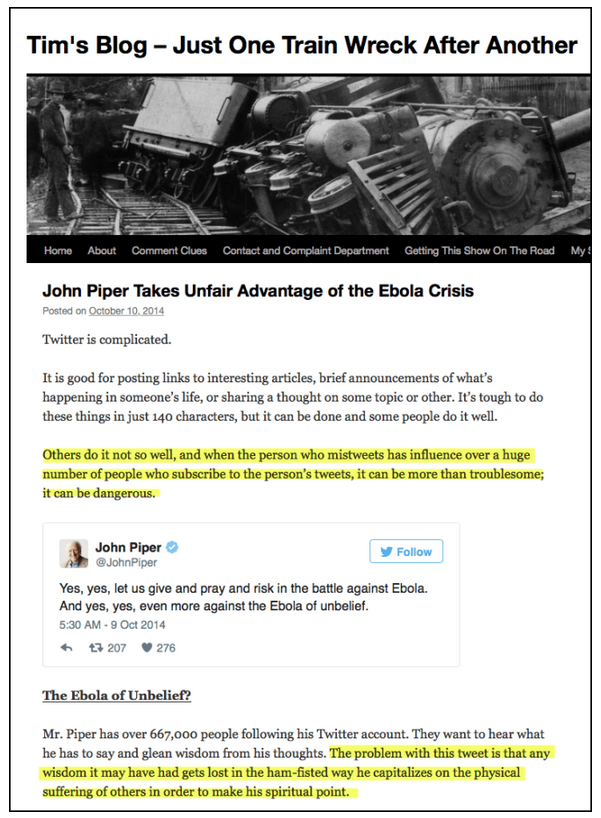 Below is a tweet that Piper wrote in response to a deadly tornado that struck Oklahoma. I guess it passed his “functional authority” test. 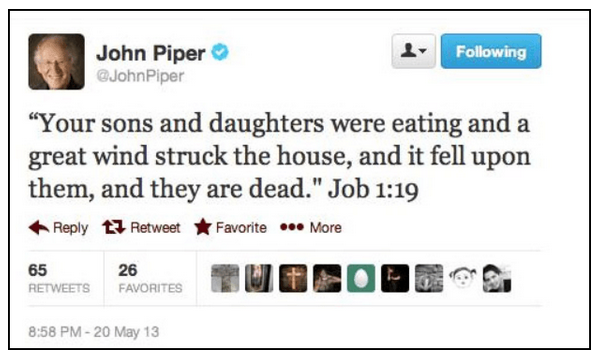 After the Piper tweet,  Zack Hunt wrote the blog below in response. It took me a few attempts to reload the page before I realized Hunt was brilliantly stating, through the use of a blank page, that there is no Christian defense of what Piper had tweeted. You can read the blog here. 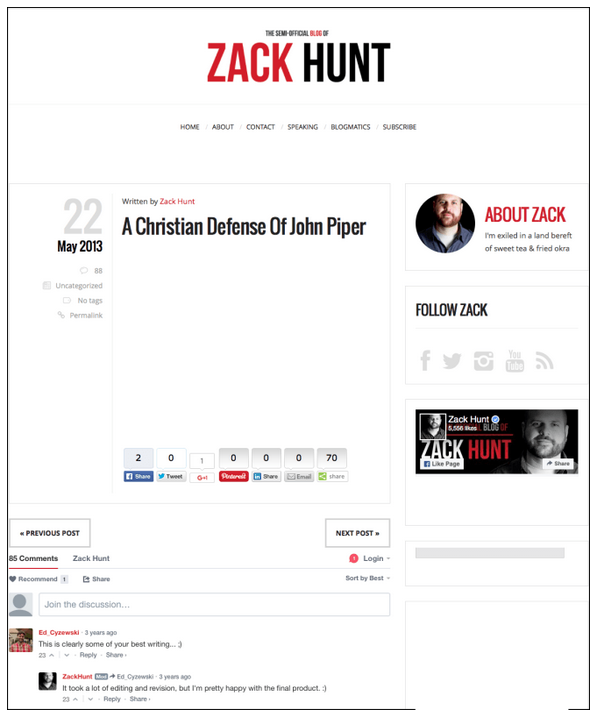 Here are a few comments that followed: 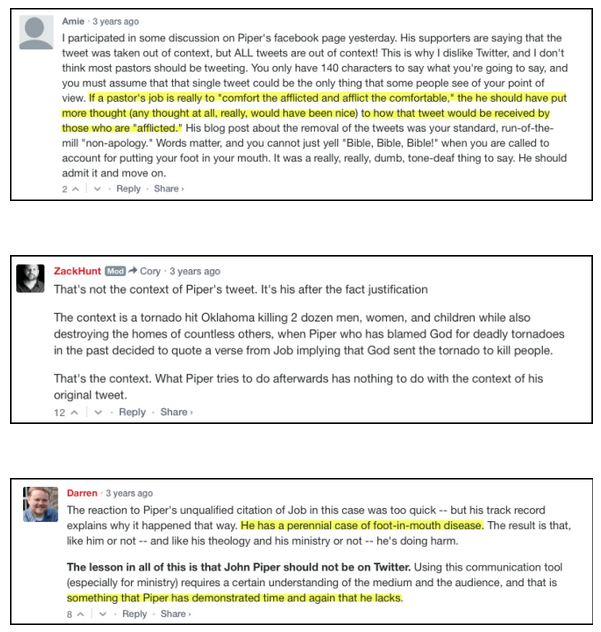 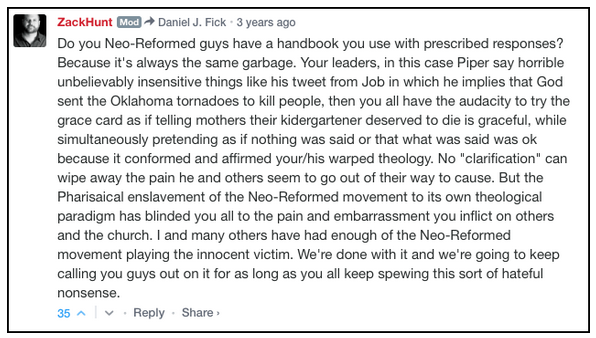 Morgan Guyton wrote an article titled “How in charge is God when tragedy strikes?” He discussed Piper’s comments about the Oklahoma tornado and the bridge that collapsed in Minneapolis. In part he said:

“I knew it was coming: the Piper tweet, this time quoting Job in response to the Oklahoma tornado. As the dean of the neo-Calvinist movement, John Piper likes to push the envelope with his commentary on God’s role in natural disasters. He did it about a year ago when tornadoes hit the midwest. In 2007 after the Minneapolis bridge collapsed, he wrote that he and his daughter discussed how God must have done it so the people of Minneapolis would fear Him because our sin against God is “an outrage ten thousand times worse than the collapse of the 35W bridge.” Piper would say that he’s just being Biblical and that it shouldn’t be surprising that speaking Biblically would make people feel uncomfortable. So how do we talk about God’s role in tragedies?

Piper’s perspective on God’s role in disasters has two components: 1) Every event that happens is orchestrated by God for the purposes of His divine plan; 2) Violence within nature reflects God’s infinite anger over human sin, which is primarily understood in Anselmian terms as an abstract offense against His honor. In Piper’s post on the Minneapolis bridge collapse, he cites Luke 13:1-4 where Jesus uses tragedies in His day to issue a warning to his listeners to repent.”

You may read the entire article here. 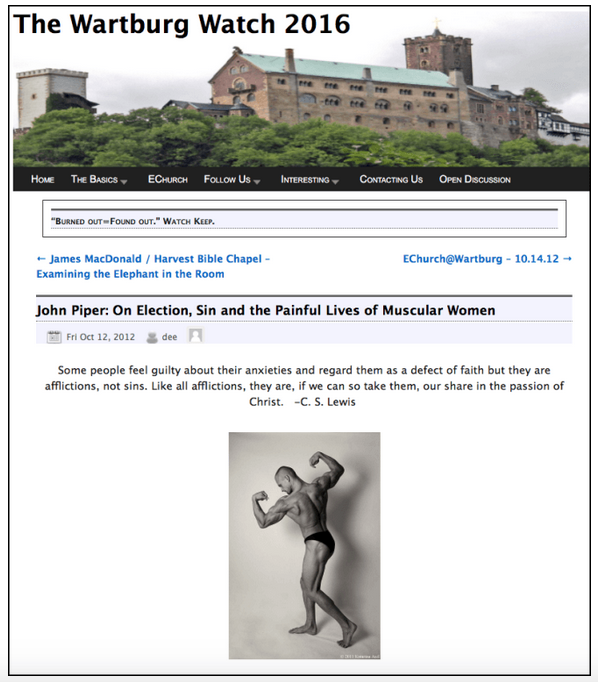 Then there is the comment Piper made about muscular women, documented by The Wartburg Watch:

2. Are muscular women are outside of God’s will?

I cannot believe that I am writing about this. A reader sent me an email alerting me to another bizarre comment by Piper. I was totally unconvinced that even Piper could say such a thing. I went directly to the source and there it was, in black and white.  Here is the entire PDF for the book called Recovering Biblical Manhood and Womanhood. The following quote was written by Piper although a number of people contributed to the this document

“Consider what is lost when women attempt to assume a more masculine role by appearing physically muscular and aggressive. It is true that there is something sexually stimulating about a muscular, scantily clad young woman pumping iron in a health club.

2. Are muscular women are outside of God’s will?

I cannot believe that I am writing about this. A reader sent me an email alerting me to another bizarre comment by Piper. I was totally unconvinced that even Piper could say such a thing. I went directly to the source and there it was, in black and white.  Here is the entire PDF for the book called Recovering Biblical Manhood and Womanhood. The following quote was written by Piper although a number of people contributed to the this document

The image of a masculine musculature may beget arousal in a man, but it does not beget several hours of moonlight walking with significant, caring conversation. The more women can arouse men by doing typically masculine things, the less they can count on receiving from men a sensitivity to typically feminine ”

I believe Piper’s response to the election question was cruel. I believe this discussion of muscular women to be bizarre. My husband spends a lot of time telling all of his patients to exercise. He is a cardiologist and it is well known that an exercise program strengthens the heart (Note to Piper: The heart is a muscular organ).

And then there is this classic; I find it hard to believe this passed Piper’s “sentinels.”

Finally, there is this event in Minneapolis. Piper, once again reminding me of Sinclair Lewis’s novel “Elmer Gantry,” seems to  be like Eddie Fislinger, that is,  he never “had had difficulty in understanding what the Lord God Almighty wanted, and why, all through history, he had acted thus or thus.”

I got to thinking, the next time severe weather is threatening your neighborhood, it might not be a good idea to be hanging around a Baptist church, seeing as all the sexual abuse they cover-up, and many of the abusers are pastors! 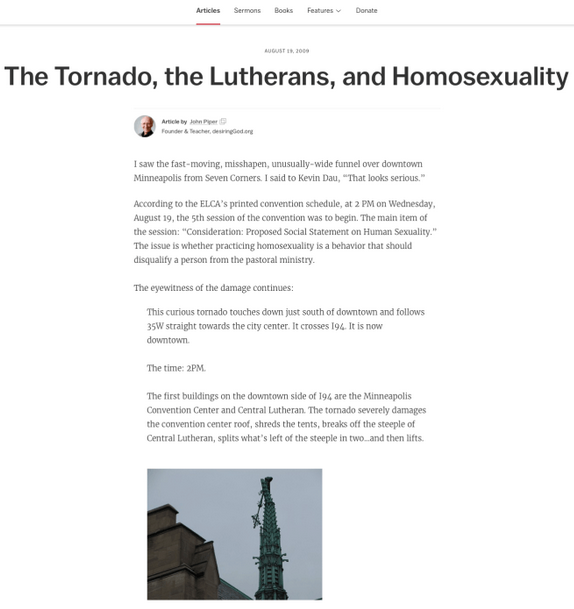 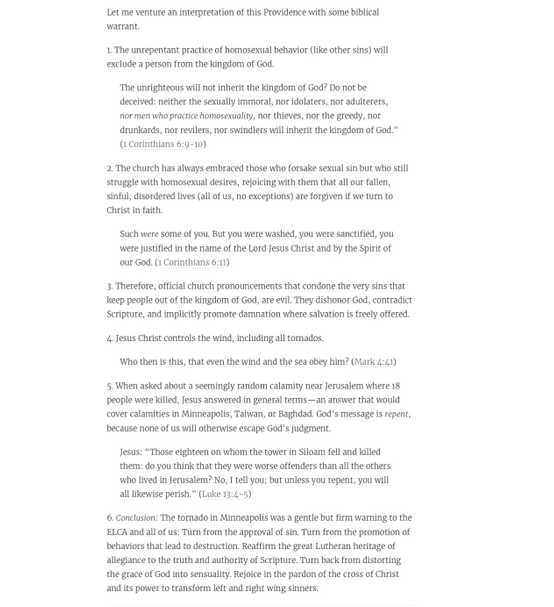