"The ministry of The Trinity Church is ruled by God, influenced by wise counsel, governed by a board, led by the Senior Pastor, run by staff, carried out by members on mission."

Well, it's official…  The Trinity Church in Scottsdale, Arizona launched yesterday, August 7, 2016, with Mark Driscoll at its helm.  Josh Green, a reporter from King 5 News, based in Washington State, showed up to cover the much anticipated event.  According to the King 5 News report, Driscoll made the following remarks during his sermon, which was broadcast via the church website:

"We tend to think if things go well it's from the Lord and if things are hard it must be from Satan. Let me [tell you] sometimes hard things come from God.  Sometimes God will allow us to endure hardship for two reasons: to change who we are and where we are.”

Obviously, the Driscolls have changed where they are by relocating from the Seattle area to the Phoenix area.  What remains to be seen is has Mark Driscoll really changed who he is?

Just who was Mark Driscoll before he retreated to Arizona?  Here is what Dee and I observed.  He was a young, brash pastor with a macho persona and a potty mouth.  He bullied people at his former church and plagiarized in his books.  He went around the country instructing guys to 'man up'; yet when it was time for him to face his own serious problems, he ran like a coward.  In our opinion, Mark Driscoll was/is both unreachable and unteachable.

For those of you who are familiar with the Driscolls, you may recall that they sat down with Brian Houston to discuss their departure from the church they planted – Mars Hill Church.  As reported in The Christian Post, God told Grace Driscoll they were "released from Mars Hill Church".  Mark Driscoll stated the following:

'the Lord revealed to me a trap has been set, there's no way for us to return to leadership.' And I didn't know what that meant or what was going on at the time. He said we're released and we need to resign."

With regard to those attending Trinity Church, they have either turned a blind eye to Driscoll's past or are hoping and praying that he has truly changed.  By the way, what is the likelihood that a man in his mid-forties can change as drastically as Driscoll needs to change?

According to the King 5 News article:

"Our family [the Driscoll clan] is here because of a storm … a storm in our own life and in the middle of it, we prayed and God gave of his word to my wife and myself… at two separate times,” Driscoll said. “We surrendered to the Lord in the midst of our storm so that God could do work in us and move us to this place for mission.”

Our 'boots on the ground' reporter/protester Dee Holmes has been faithful to show up week after week outside The Trinity Church to protest Mark Driscoll's new ministry.  Below is a photo she sent us of the sign she held warning Trinity attendees about their pastor.  The King 5 News reporter interviewed her yesterday, and this is what he had to share: 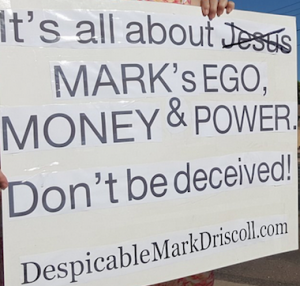 One of the first things people saw when they pulled in to The Trinity Church was a sign that protester Dee Holmes held in her hands. She’s driven multiple Sundays from her home in Mesa to protest Driscoll’s opening at Trinity. Her sign this weekend referred to “MARK’S EGO, MONEY & POWER.”

"My goal is to catch the people that don't know anything about Driscoll,” she said. “It's been less than two years since he imploded Mars Hill Church in Seattle and here he is starting up another church. This should give people pause."

When she arrived home yesterday afternoon, Dee Holmes (aka mirele), posted the following comment on our blog (see screen shot below): 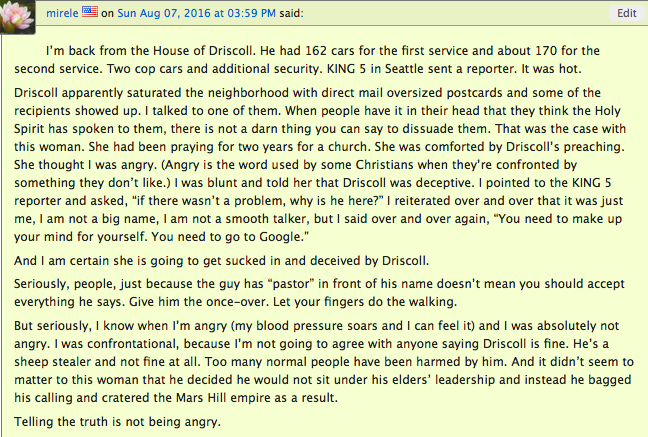 Perhaps the first to report on this church launch was our friend Warren Throckmorton, who writes over at Patheos.  In his post, he included some of the information shared above along with a photo from The Trinity Church's Twitter (see below). 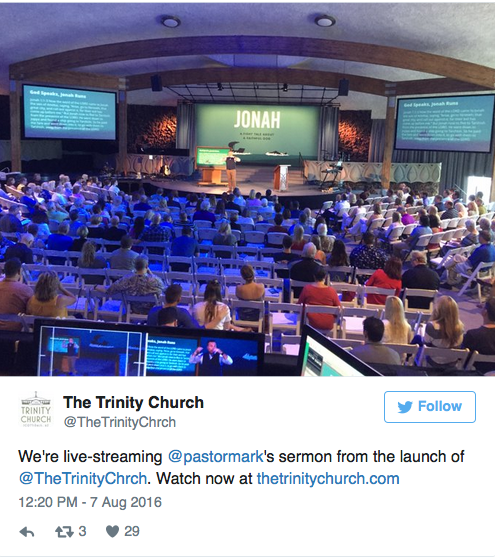 As the signs in front of the church and on the big screen indicate, the sermon topic during the first 'official' worship service was Jonah.  Perhaps Mark Driscoll believes he was swallowed up by a big (symbolic) fish and spit out onto the dry land of Arizona.

We're not so sure about that; however, we do believe it's highly possible that in symbolic terms the 'big fish' may very well be The Trinity Church.  Those who meet inside its walls may reach a point (as the Mars Hill folks did) where they realize something is terribly wrong!  At that point they may be looking for a way out. Perhaps this song by FFH (Far From Home) will ring true with them in the future…  It's one of my favorites by them.