The internet is not for sissies. Paul Vixie link 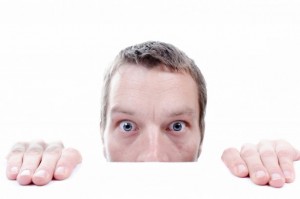 Most of you are familiar with Ben and Jerry's Ice Cream. Do you know what happened when Pillsbury, which owned Haagen-Dazs, became threatened by the growing popularity of Ben and Jerry's products and decided to try to *freeze them out?* (I could not resist.) I remember seeing pictures of Greenfield protesting outside of Pillsbury's headquarters, holding a sign that said "What's the Doughboy Afraid of?"

In 1984, big business came after the little guys. Pillsbury, the million dollar company behind Haagen-Dazs, began to feel threatened by the rapid growth of Ben & Jerry’s. In an attempt to shut down the young upstarts, Pillsbury gave Ben & Jerry’s distributors throughout Boston an ultimatum: sell Hagen-Dazs or sell Ben & Jerry’s, but not both.

Cohen and Greenfield were not about to let this corporate giant shut them down. After finding little hope in their legal options, the two decided to take matters into their own hands. Together, they launched the now famous “What’s the doughboy afraid of?” campaign and began taking it as public as they could. From placing advertisements on the sides of buses to renting banner planes for flying around major sporting events, Cohen and Greenfield did whatever they could think of to gain support for their little business. They took out a classified ad in Rolling Stone magazine asking readers to “help two Vermont hippies fight the giant Pillsbury Corporation.” Greenfield even took to being a one-man picket outside the headquarters of Pillsbury in Minneapolis, handing out pamphlets that read, “What’s the doughboy afraid of?”

Later that year, Cohen and Greenfield came up with the idea of putting a 1-800 number on every pint of Ben & Jerry’s ice cream. “We started getting like a hundred calls a night,” recalls Greenfield, “most of them between the hours of midnight and 3 a.m.” Many callers even offered to form gangs of Doughboy busters. 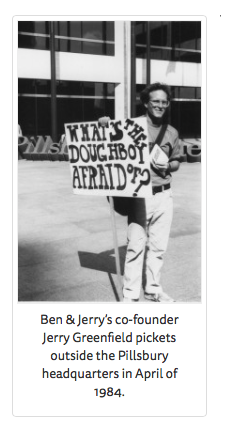 Guess who won out on this deal? The media coverage was enormous and Pillsbury came off looking like the big bad corporation trying to stomp on the little guy. (My favorite flavor is Cherry Garcia.)

The Gospel Coalition is terribly concerned about the recent Facebook controversy and inadvertently reveals their own hypocrisy.

If you were on Facebook last month, you might have felt like Alice tumbling down the rabbit hole when you noticed Facebook on its own “Trending” sidebar. Several former employees admitted to manipulating the Trending feed. They frequently introduced topics they thought deserved more coverage and occasionally suppressed conservative commentary by choosing different sources for topics that would appeal to conservatives.

Fascinating… Wax is appalled that former Facebook employees admit to manipulating the *Trending* feed. He should know something about that one.

The tailoring of our news feed leads us to assume that everyone sees what we see, and then we assume the worst of the people around us. How can they think that way? we wonder. They must be either stupid or evil!

3. Wax is terribly concerned about self righteous news loops.

4. Wax has solutions for this awful problem. He wants to learn from their opponents!!!! Good night!

Two commenters at the website immediately saw the problem. I took a screen shot in case they disappeared… 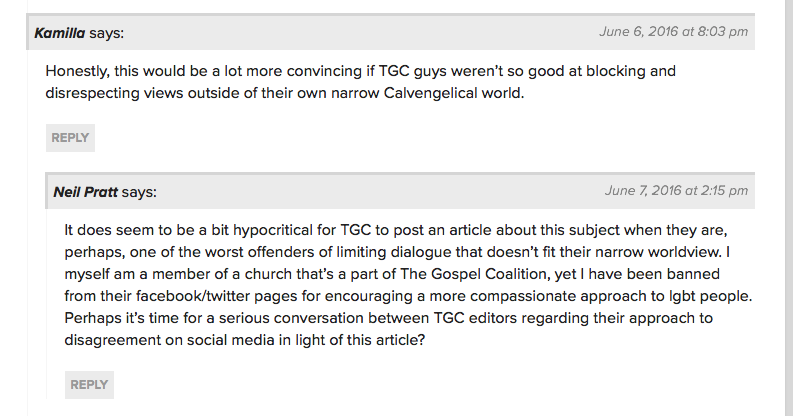 The Gospel Coalition blocks those who disagree with them on a number of issues, especially anything to do with Sovereign Grace Ministries, CJ Mahaney and other BFFS  who are designated a TGC officially protected gospel™ BFF.

Jonathan Merritt contacted me and asked if I had been blocked by TGC. After snorting, I told him that I was most definitely blocked, along with anyone else who had the temerity to speak up on behalf of the SGM victims. This is absolutely not allowed by the very culturally concerned TGC editors.

Merritt went on to write The Gospel Coalition and how (not) to engage culture for Religion News. He began the article with this observation.

TGC’s brand of Christianity is both conservative and Calvinist, but according to its tagline, they feel called to promote “cultural transformation.” Numerous articles address how and why Christians should engage culture. The “About” page on its website says they desire to help Christians “truly speak and live for [Christ] in a way that clearly communicates to our age.

1. Merritt stated that the TGC articles are a "handbook on how to criticize just about anything." I would like to add that, from my perspective, TGC criticizes anything and everything except their own tribe.

Merritt made a particularly incisive statement on Thabiti Anyabwile.

When writer Thabiti Anyabwile wanted to criticize homosexuality, for example, he encouraged readers to recover their “gag reflex” and focus on the “yuck factor.” Setting aside the many–and I mean many–problems with this way of thinking, Anyabwile’s approach is not exactly a silver-plated conversation starter in a non-Christian culture.

2. Merritt declared that TGC is on a "blocking spree."

Over the course of the past year or more, TGC has been on a social media blocking spree. Those who dare to criticize them are being shut down and shut out.

3. Merritt provided examples of how TGC demonstrates their hypocrisy by blocking those who have the gall to critique their officially protected class of gospel™ people and ministries.

For example, Rachel Held Evans was blocked when she critiqued an article by Jared Wilson who was positively quoting Doug Wilson.

The article quoted controversial pastor Douglas Wilson: “the sexual act cannot be made into an egalitarian pleasuring party. A man penetrates, conquers, colonizes, plants. A woman receives, surrenders, accepts.” Evans countered that the statement was offensive and degrading to women and triggered images of rape and sexual violence. Later, prominent theologian Scot McKnight called on TGC to remove the post, arguing it “inculcates justified violence” against women.

TGC’s leaders would have done well to listen to her. She was expressing legitimate concerns and Douglas Wilson has also praised the “unexpected blessings of slavery” and admitted that he believes LGBT people could be executed in certain circumstances.

I was about to add that Jared Wilson apologized for writing this statement. I'm glad I didn't. You see, this crowd will often block the critics, remove the offending post and continue to tiptoe through the tulips whilst pretending nothing ever happened. They also pretend that the critic doesn't exist as well.

Then, there was, and is, the infamous blocking of all of us who stood by the victims of Sovereign Grace Ministries while the editors of TGC and their BFFs continue to support them.

Evans was not the first person to be stiff-armed for speaking up. Not by a long shot. Most people who have been blocked by TGC say they were punished for questioning the coalition’s disastrous defense of Sovereign Grace Ministries, a prominent Calvinist ministry that was embroiled in a sexual abuse scandal. TGC personalities connected to SGM continued to express support and friendship for those involved with the scandal even as it became clear that Sovereign Grace leaders were complicit. Many who questioned TGC’s stance were blocked. Some who merely used Twitter handles such as #istandwithsurvivors were similarly punished by TGC.

He listed other reasons for blocking people.

Merritt wondered if the leadership of some organizations can be narcissistic.

Merritt provided the following quote which should cause some TGC leaders to do some self examination.

A pattern of offering criticism while not being able to receive it, according to Dr. Leon Seltzer of Psychology Today, is a characteristic trait of narcissism. As Seltzer writes, “Deep down, clinging desperately not simply to a positive but grandiose sense of self, [narcissists are] compelled at all costs to block out any negative feedback about themselves.”

Where is the accountability?

TGC editors refused to answer Merritt's reasonable questions. What are they afraid of?

I then spoke with several TGC employees off-the-record who told me there was no official social media policy and that several people have access to their accounts. Another TGC employee requested an interview with the person they believed was responsible for managing their social media, but informed me that no one at TGC wanted to speak with me. No one is required to speak to a particular journalist. But several of my colleagues also report similar treatment when they’ve contacted TGC.

A ministry that blocks dissenters and ignores journalists who might ask difficult questions is not engaging culture; they are evading culture. Christian isolation will not lead to cultural transformation.

Merritt offered some excellent suggestions on how NOT to engage culture.

Thanks go out to Jonathan Merritt for asking TGC the hard questions even though he can't get an answer.

Here is my final question:

What is The Gospel™Coalition afraid of?

In fact, I think it would make a great hashtag. #whatistgcafraidof?

TGC is supposed to be loaded with *real* men who demonstrate Biblical™ manhood. However, they come across like that third grade bully who calls someone a name and then hides behind his mommy's skirts. Ah yes, sissies, that's word I was looking for.

Everyone should be asking why Collin Hansen refuses to answer questions. People should ask Tim Keller, who was a TGC founder, why he supports such a repressive culture from folks who are supposed to be engaging the culture. What exactly are they afraid of?