“She approached them all without a trace of sentimentality or condescension. The older Docklanders were accustomed to meeting middle-class do-gooders, who deigned to act graciously to inferiors. The Cockneys despised these people, used them for what they could get, and made fun of them behind their backs, but Sister Evangelina had no patronising airs and graces.” ― Jennifer Worth link 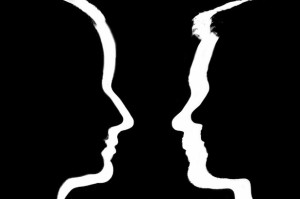 I recently read When Grace Hurts the Church  by Aaron Menikoff which was posted at The Gospel Coalition website. Aaron is the pastor of Mt Vernon Baptist Church in Atlanta. At first blush, the post appeared to stress how Calvinists and Non-Calvinists can get along. He even appeared to be implying that his church is quite diverse in their range of thinking. In fact, I was rather excited by the idea of a Calvinist, who considers himself (as he states in the article) young, restless and reformed, demonstrating how we can all get along.

I’ve witnessed conflict when those who heartily embrace divine sovereignty encounter those who wrestle with it.

However, my hopes were dashed as you must have figured by by the title of this post.

His conversion to Calvinism

He emphasizes that he was once among those who didn't believe that God chooses some to be saved and does not choose others. He recounts his conversion in breathless wonder. I wonder what his initial conversion story was like…

My viewpoint eventually changed, and I can still remember the moment I understood God to be absolutely sovereign in redemption. After pouring over the chapter on Jesus’s response to Nicodemus in John 3, everything clicked: without the Spirit of God, I’d be spiritually blind; without the new birth, I’d be spiritually dead. for the first time I grasped what it meant to be saved to the praise of his glorious grace (Eph. 1:3–14). The jaw of my heart fell out of my chest and crashed onto the sidewalk.

He claims his church does not require adherence to all five doctrines of grace.

But the people in my church aren’t monolithic in their view of the doctrines of grace. Our statement of faith doesn’t require allegiance to all the “five points.”

However, I spent about 30 minutes reading over the website of Mt Vernon Baptist Church. I bet there are few readers of TWW who would walk away from such a review and say that the church is not a hard core, Calvinista sort of church.

I think it would be better for the pastor to tell the whole truth as opposed to pretending that the church is somehow open and diverse.

The Dividing of the Saints

Aaron believes that the following divisions will help us to *understand* one another. Please read the full descriptions in his post. I have highlighted some areas that I find interesting.

I think Aaron correctly points out what hard-line Calvinist believe. Recently, I got an email from two different folks. Both of them claimed that I need to *understand* what the Bible teaches. One was fussing about my interest in evolutionary creationism and the other was claiming that I wasn't a Christian because I am not a Calvinist. I have read my Bible, extensively and told them so. I just disagree with their interpretation.

Natives grew up steeped in conversations about sovereign grace. When their Sunday school teacher asked them why God allows suffering in the world, they answered, “For his glory! Some natives assume the doctrine of divine sovereignty much the way they accept the doctrines of the Trinity and sanctification; it’s simply what the Bible teaches. Natives have a hard time understanding why people struggle with election or predestination.

I agree with the author in this regard. The converts that I have met believe that somehow they have the full picture now and the rest of us do not. However, I have yet to meet an Arminian Christian who gave herself credit for any part of her salvation.

Converts remember the day they came to understand the doctrines of grace (see above!). They can speak of that moment almost like a second conversion. They regret how they once gave themselves some credit for their salvation. Converts are skeptical of church programs and marketing and anything that seems like it could appeal to the flesh. They worry a focus on human responsibility will eclipse the precious truth of God’s sovereignty.

Here is where I start to get a little miffed. He assumes that those who do not buy the 5 points of Calvinism need help in working through the implication of God's sovereignty. What if we don't? What if we have worked this through quite thoroughly and still don't buy predestination?

Novices are new to the idea of God’s sovereignty in salvation, and they worry it leads to a fatalistic view of the Christian life.  They’ve been told the doctrines of grace stifle evangelism and good works. They struggle to grasp how churches that did so much good for them could have neglected something so important as sovereign grace. In congregations full of natives and converts, novices can feel like second-class citizens. They need help working through the implications of God’s sovereignty, but they rarely ask for it, fearful they’ll appear out-of-step with their family of faith.

His advice begins to reveal his true problem. In the end, this pastor is a 5 pointer and believes that anyone who is not does not understand "the full counsel of God." No matter how hard he tried, he just couldn't go there.

The author believe that 5 Point Calvinism teaches the full counsel of God. That mean anyone who does not believe this is somehow inferior in their beliefs. I guess he believes that Non-Calvinists cannot adhere to sound doctrine. Good night!

Be thankful God opened your eyes long ago to the depth of his love for you. Never take good teaching for granted. God providentially placed you in a family or church that taught the whole counsel of God, gripped even the difficult doctrines, and believed a sound life depended on sound doctrine.

Here he becomes downright condescending. He tells the converts to be gentle and patient with those sweet things who don't seem to understand the truth. The truth is 5 Point Calvinism, mixed in with complementarianism.

Be careful, gentle, and patient with those around you. You might help them by explaining where you once struggled with these truths, too.

He wants Scripture to *shape me.* I assume he believes that, unless we are 5 pointers, we are not interested in letting Scripture change our lives. As for things in the Bible that make me feel uncomfortable, he has no idea how much I have wrestled with, how much I have read and how long I have studied. It is arrogant to assume that anyone who disagrees with Calvinism is somehow ignoring *difficult* Scripture.

Be open to teachings of the Bible with which you might be uncomfortable. Let Scripture shape you. Remember that even the hard doctrines are for your good.

Notice how he goes on to say that he only struggled as a *young Christian.* I guess that means he assumes that all who do not love John Piper, etc. are immature. Oh, and our problems with God's ultimate authority (by this I am guessing he means that God predestines the salvation of only some) are ill-founded.

It bothered me that he didn’t choose everyone. As a young Christian my problems with God’s ultimate sovereignty in salvation were ill-founded, but they were real and needed to be addressed patiently and with love.

There is absolutely no tip of the hat to Christian who is not a Calvinist. In the end, Menikoff comes across as arrogant. He is the one who has the whole truth and the one who understands the whole counsel of God.

He also appears to misrepresent the beliefs of Arminians as commented on by John. 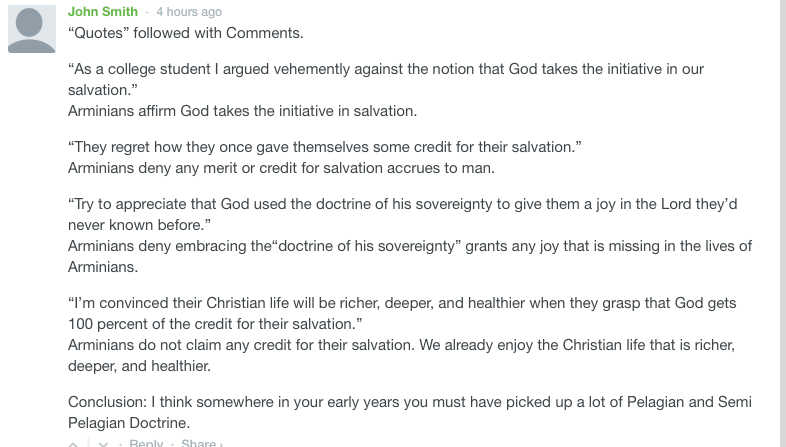 A few other commenters picked up on what could be an interpreted as a patronizing tone of the author. 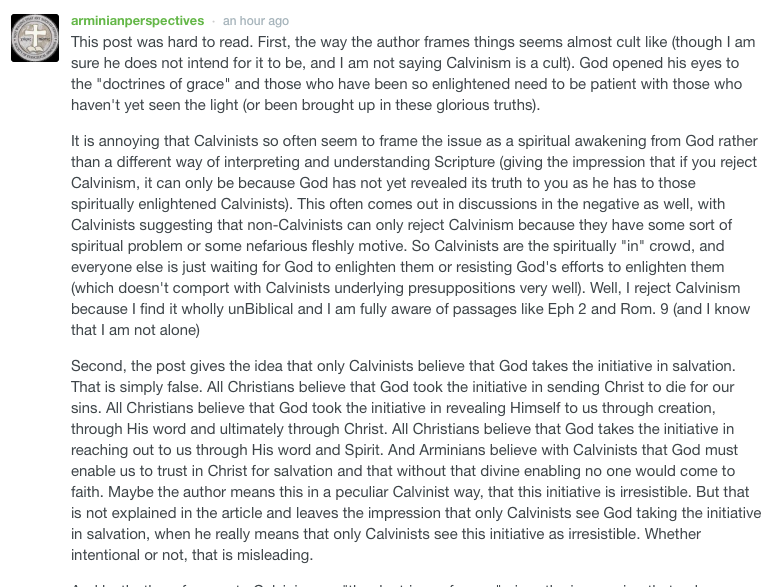 Unfortunately, Aaron comes off as the intellectually and spiritually superior Calvinista whose advice will only lead to more division in the body of Christ. He is not the solution. He is part of the problem.

Advice for those Calvinists who really want to try to get along:

1.Do not assume that all those who disagree with you are weak in their theological background.
For example, I have read all of Wayne Grudem's Systematic Theology, most of Calvin's Institutes, much by Sproul, along with Platt. Mohler, and many others.

2. Don't assume that if a Calvnist conversionvhappened to you that it will happen to me.
You are not me. You do not have my background, experiences, education, etc. We do not all walk in the same shoes.

3. Stop treating your "come to Calvin" moment in the same way as your salvation.
It is not the same and you should be ashamed if you believe it is. Study apologetics for Christianity, not Calvinism.

4. Find some points on which we can all agree.

6. Next time you write a post about non_Calvinists, run it by one to see what she/he thinks.

6. Study Wade Burleson and see how he treats those who differ from him on Reformed theology.
He is a shining example of how to do it.

7.  Join a Bible study with Calvinists and non-Calvinists.
See what you can learn. I am in one such study. One of our dear friends is a 5 point Calvinist and he actually likes this blog!

8. Now here is the hard one. If you really want non-Calvinists to be comfortable at your church, pick a church leader who is a nonCalvinist.
We have done that here. Wade's sermons are on our EChurch. There can be unity in diversity if you really want it. Do you?

Finally, I am assuming that you have told every potential member, up front, prior to joining, that your church that stresses Calvinism and you think that Non-Calvinists are in need of help to understand the truth. That is what honest people who follow the Truth would do.