"I would argue that those who served alongside C.J. Mahaney at SGM and those who were his congregants are in a much better position to assess his character and state of being 'above reproach' than fellow celebrity pastors that he shares a conference stage with." 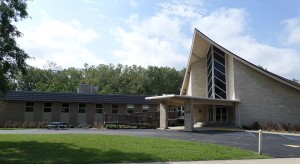 (where DeYoung serves as Senior Pastor)

No doubt many of our readers have seen Kevin DeYoung's recent post entitled What Does It Mean For An Overseer To Be "Above Reproach" And "Well Thought Of By Outsiders"?  There can be little doubt that DeYoung is defending his close friend C.J. Mahaney.  Early in the post, Kevin DeYoung writes:

So unless we want to exclude Paul and Jesus from serving as an overseer in the church, we must conclude that being above reproach and being well thought of by outsiders must mean something other than, “everyone likes this guy; he has no enemies and no accusations against him.” Not only is this standard untenable for almost anyone who has a public profile in today’s social media world, it’s not biblically consistent. The qualifications in 1 Timothy and Titus must mean something else.

In short, the idea behind “above reproach” and “well thought of” is largely the same: the elder-pastor-overseer must live a life of Christlike character and virtue that is not easily refuted by those who know him best. The closer you look, the better the mature Christian appears.

Not surprisingly, Kevin DeYoung has received a good bit of criticism for insinuating that his colleague C.J. Mahaney is "above reproach" and "well thought of by outsiders".  This is the danger of being in the Young, Restless, and Reformed bubble.  These guys are so isolated and insulated that they are out of touch with reality.

Before we take a look at some of the comments that have been made in response to DeYoung's post, it is worth revisiting the fact that Kevin was hugely responsible for Mahaney's return to ministry when he served on the Preliminary Panel.  We wrote about it in our post entitled – Is C.J. Fit for Ministry?

The year after DeYoung and gang gave Mahaney a thumbs up, C.J. returned to Michigan to deliver the following message at University Reformed Church:

This is the same sermon Mahaney preached at a Neo-Cal church here in Raleigh a few ago.

Because Mahaney had/has a history of donating money to ministries outside of Sovereign Grace Ministries Churches, we would LOVE to know whether he made any contributions to DeYoung and/or University Reformed Church (pictured above).  Since this congregation isn't particularly large (DeYoung stated back in 2014 that that church had 422 members) they would probably have welcomed contributions from those outside the membership.

Now let's take a look at what others are saying about Kevin DeYoung's defensive post.  Note: as of this writing there are 29 comments under the 'overseer' and 'above reproach' post, and so far they have not disappeared.  We are including screen shots of the comments that caught our attention, just in case there is some sort of 'glitch'. 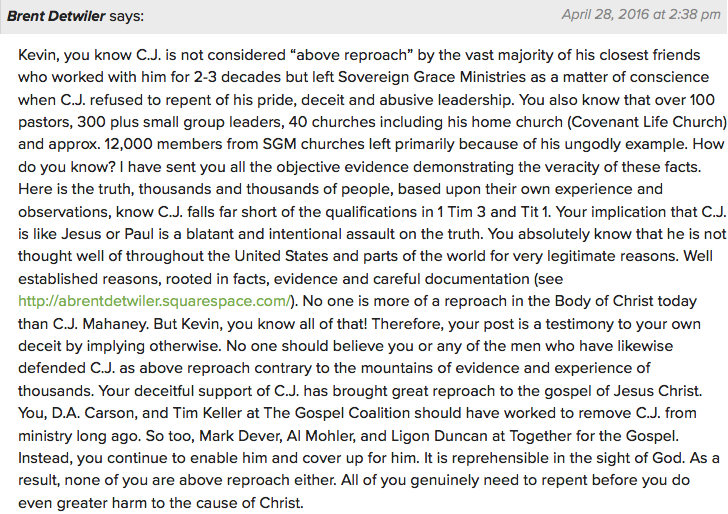 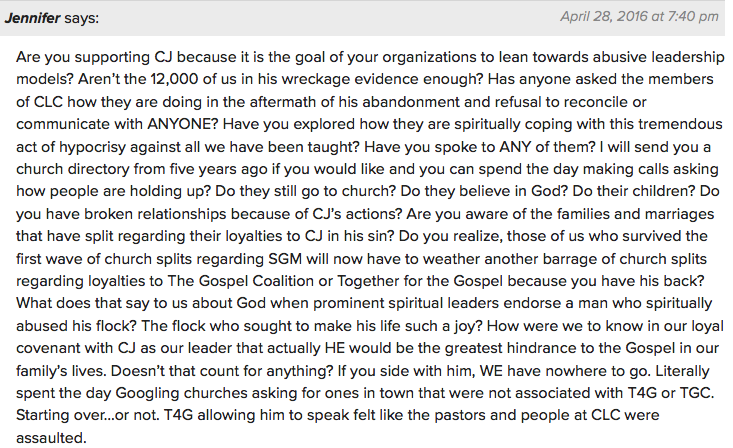 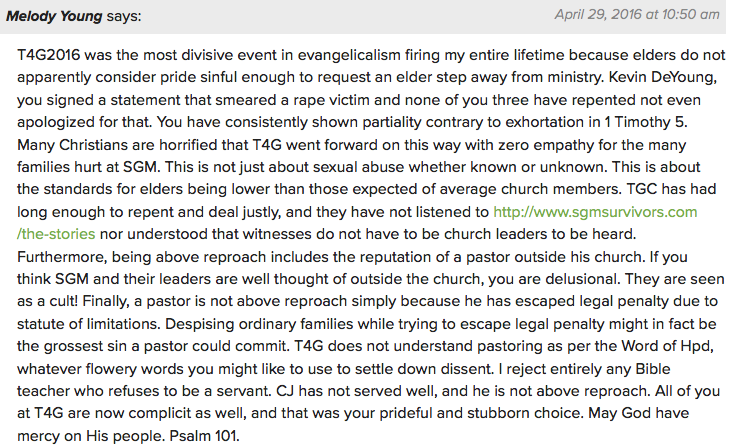 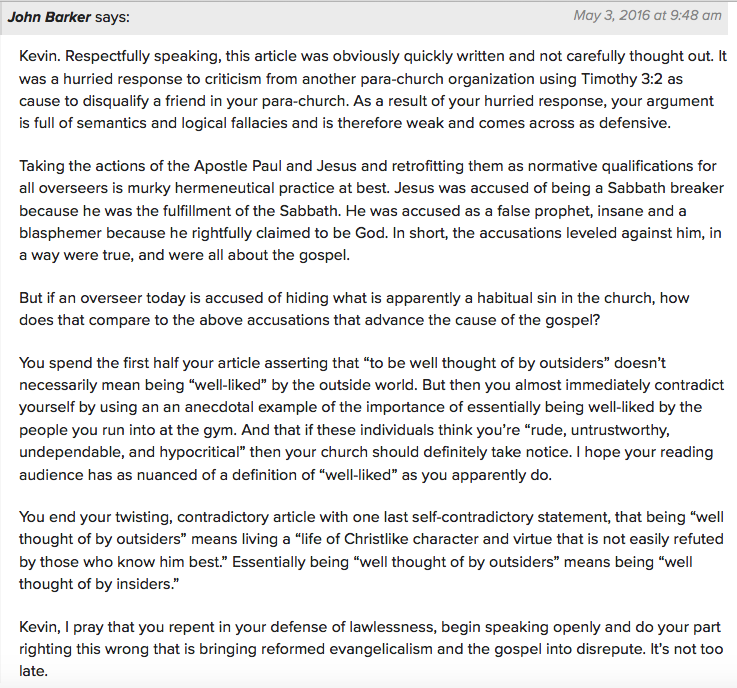 Of course, Crazy Busy Kevin DeYoung has obviously been way too busy to respond to any of these comments.  In hindsight, it probably would have been better had he never written this post.  It makes him appear even more complicit than before.

Reflecting back over all that has happened, it is interesting to contemplate how closely involved Kevin DeYoung was with C.J. Mahaney and Sovereign Grace Ministries prior to him serving on that infamous preliminary panel that rendered its judgment that Mahaney was 'fit for ministry'.  How in the world could DeYoung possibly be objective when SGM pastor Curt Allen was singing about him at the 2010 SGM Pastors Conference, which took place just nine months before the preliminary panel announced its decision?

Finally, Kevin DeYoung needs to heed his own advice, which he doled out over a year ago in this post – The God of Justice Hates False Reports.  He wrote:

Please, please, please, let us be more careful with our words. Let our blogs be based on knowledge and our tweets be founded on facts. Let us be among the last to speak our minds if we are not one of the first to know the truth.

Does Kevin really know the whole truth about Mahaney?  We contend that he does not.