“Sometimes I think the surest sign that intelligent life exists elsewhere in the universe is that none of it has tried to contact us.”-A quote from that other Calvin. 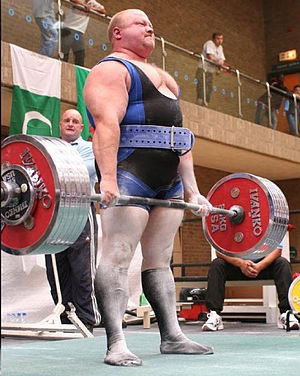 “In Revelation, Jesus is a pride-fighter with a tattoo down His leg, a sword in His hand and the commitment to make someone bleed. That is the guy I can worship. I cannot worship the hippie, diaper, halo Christ because I cannot worship a guy I can beat up.”

The gospel™ boys fell all over themselves trying to imitate Driscoll on the man thing. Then, they went further down the road in promoting Duck Dynasty and wrote a gazillion posts at The Gospel™ Coalition website. Some of them took to growing the beards just like some of them attempt to look like Mahaney by shaving their heads. This is redneck theology, especially when they wear camo to preach and give guns away at conferences.

They have attempted to convince us that they have a corner of gender theology market because they are Calvinistas and it has been definnitively proven by Calvinistas that they are the most theologically adept of all mankind since they can quote John Calvin and prove he had nothing to do with the murder of Michael Servetus. They even seem to channel John Calvin in how some of them speak to those of us Christians who do not agree with their take on certain theological points.

Calvin treated his critics with contempt, calling them “pigs,” “asses,” “riffraff,” “dogs,” “idiots,” and “stinking beasts.” In this vein, Calvin said this of the great Anabaptist leader, Menno Simons: “Nothing could be prouder, nothing more impudent than this donkey.”(8)

[8] Philip Schaff’s goes into this with sources in French, etc. in his History of the Christian Church, Volume VIII, p. 594ff. Schaff cites his sources. For the quote on Menno Simons, see The Secret of the Strength by Peter Hoover, p. 63; Calvin, IV, 176; HRE XII, 592.

I may not be able to quote the Institutes with wild abandon but I am perfectly capable of knowing what is baloney theology is when I see it. I do know my Bible, especially from a big picture, contextual perspective.

Which brings me to my next point.

Well, darn! I always thought it was the divinity of Jesus, who lived a sinless life and was crucified, dead, buried, resurrected, and ascended, that defeated Satan. That's what the Bible seems to indicate. So, where do we find mention of this holy testosterone in the Bible? Shouldn't Strachan know where it says this in the Bible since he is the head of the Council of Biblical™ Manhood and Womanhood and claims to know the Bible? Why didn't he quote chapter and verse?

Let me get Owen's argument straight. If we could have extracted pure testosterone from Jesus, could we have used this in spiritual warfare?  Does this mean that testosterone is part of the full armor of God? Ephesians seems to have left this out.

14 Stand firm then, with the belt of truth buckled around your waist, with the breastplate of righteousness in place, 15 and with your feet fitted with the readiness that comes from the gospel of peace. 16 In addition to all this, take up the shield of faith, with which you can extinguish all the flaming arrows of the evil one. 17 Take the helmet of salvation and the sword of the Spirit,which is the word of God. (Eph 6:10-18) NIV Bible Gateway

Should there have been a second half of verse 17? You know, inject yourself with lots of testosterone to crush Satan?

Apparently those who have cojones over at CBMW are jumping on the testosterone bandwagon. According to another CBMW post that was written this month, 5 Key Ways to Cultivating Biblical Manhood in Your Church​ by CBMW's Jason Allen:

Through this, the church needs to recover biblical manhood, Christian masculinity—what we might think of as sanctified testosterone.

TWW Prediction: This will become the new buzz word, following on the heals of winsome, gospel, Biblical and slander.

Strachan appears to play the "I'm smarter than you, idiot" game in his response to the confusion caused by his tweet. He calls his thinking on the matter "rather obvious" because Jesus was a man, not some genderless floozy. 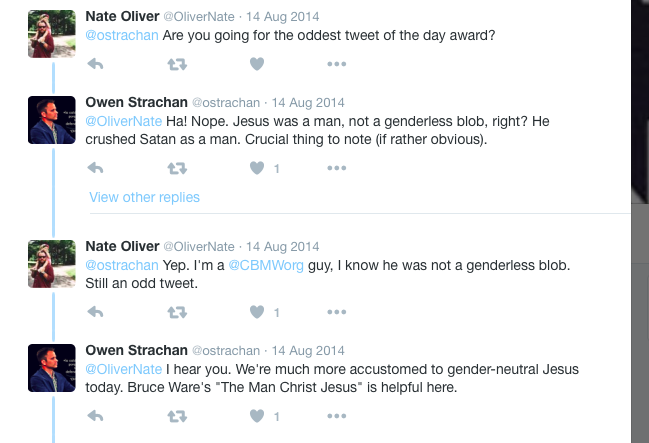 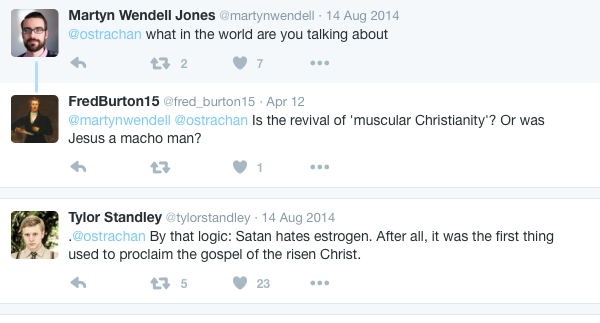 And hilarity ensued. (I choked on my coffee today.)

Was redemption really all about the testosterone of Jesus?

This is an important observation. Jesus had some estrogen as well as testosterone.  How do we know for sure that it wasn't the small amount of estrogen in his body that caused the defeat of Satan? Is it written somewhere in the Bible? I wonder if Strachan and BFFs did any reading on the subject or the endocrine system.

According to Testosterone and Estrogen Balance in Men

Testosterone is for men, and estrogen is for women, right? For the most part yes, but there is estrogen found in all men, and women do need small amounts of testosterone. There is, however, a growing need to understand the effects of estrogen in men. Like all hormones, estrogen needs to be kept in balance in both men and women. Chronic health conditions are more likely to occur in men as a result of estrogen levels becoming too high.

Testosterone and estrogen are actually very closely related in the body. A look at their chemical structure reveals only subtle differences. Yet, the differences of the effects of these two hormones on the body are substantial. Testosterone affects nearly every cell in the male body. It improves muscle mass and bone density and will also have a positive affect on the heart, brain and blood vessels. Estrogen is actually made from the circulating testosterone in the body by an enzyme called aromatase. As men age, they tend to make increasing levels of estrogen with decreased production of testosterone. Estrogen can be made in the liver, muscle and brain, as well as the fat cells.

In fact, every last cell in the body of Jesus has his male genetic code. One could just as easily conjecture that it was his pancreas or his bunion that defeated Satan.

Unfortunately, Strachan appears to be treading into Joseph Smith territory.

“…it is necessary that we should understand the character and being of God, and how he came to be so; for I am going to tell you how God came to be God…These are incomprehensible ideas to some; but they are simple. It is the first principle of the Gospel to know for a certainty the character of God and to know that we may converse with him as one man converses with another, and that he was once a man like us; yea, that God himself the Father of us all, dwelt on an earth the same as Jesus Christ himself did.”

Jesus has two natures and this is the divine mystery. He is fully man and fully God. It was the divine nature of God that allowed Jesus to live a sinless life, not his testosterone. Jesus was not born with a sin nature unlike the rest of us.

Where does it say any of this in Scripture?

This commenter seem to have a better grasp of the subject than Strachan and she has a lower testosterone level than he does.

What is the deal behind this incessant clamoring to make men so different than women that causes them to write this weird stuff?

It seems to me that these men are so insecure with their masculinity that they must attempt to read into Scripture what is not there. Why? Did these guys get beat up when they were little kids and are now trying pretend that they are bad*** dudes? We may be different in our biology, but men and women experience similar longings and concerns. CBMW appears to be trying to convince us that men and women are so different that we cannot experience similar feelings.

Here is an example.

In the CBMW post, there is an effort to show the distinction between men and women by feelings.

Men long for a higher calling. They need a higher purpose. Our hearts leap within us when we see exhibitions of courage, when we hear tales of heroism, when we witness valiant sacrifice. Give men a grander vision for their life, one marked by service, leadership, and devotion to great and noble ends in the Kingdom of Christ.

Do women not wish a grander vision for their life. Do they not want to strive towards a higher calling? Should not the life of women be marked by service? Do women have no interest in devoting their lives to doing great things for Christ?

The answer is obvious. Both Strachan and Allen get an *F* for their poor understanding of basic biology and an inability to provide us with Biblical texts which back up their assertions. This was a *complementarian fail* and some might say it was an impotent argument.