"I appeal therefore to the organizers of T4G to remove C.J. Mahaney not only from the roster of speakers but also from the organization itself. It gives me no pleasure to write that sentence." 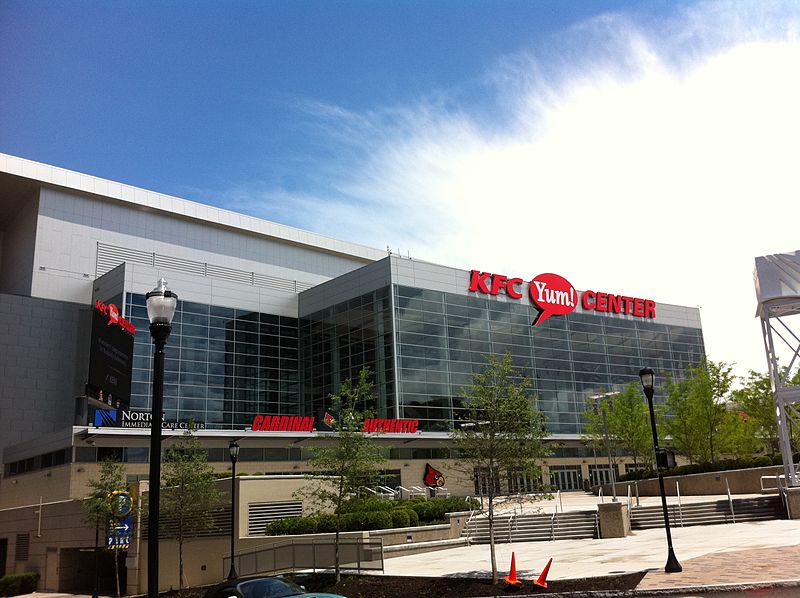 Together for the Gospel attendees are gathering in Louisville for the sixth time since 2006, and this year's theme is:

We Are Protestant – The Reformation at 500

Of course, conference organizers are capitalizing on that courageous act that rocked the world — Martin Luther's defiant nailing of the 95 Theses to the door of Wittenberg Castle Church on October 31, 1517.  Here is a clip of that historic event from one of my favorite movies Luther (2003).

If you haven't seen this inspirational movie (or if you'd like to watch it again), click here.

Getting back to the conference theme, notice the words in RED – We Protest.  It appears conference leaders will be raising their voices in some kind of protest.  We'll just have to wait and see…

What we can tell you before the event commences is that there are protesters who are protesting T4G.  Specifically, these individuals are voicing dissent to C.J. Mahaney being included on the speaking roster.  Here are just three of those protesters:

(1) Todd Pruitt, lead pastor of Covenant Presbyterian Church in Harrisonburg, Virginia.  Todd, along with Carl Trueman and Aimee Byrd, are contributors to Mortification of Spin, which can be found on the Alliance of Confessing Evangelicals website.  You can read his bio here.  It is interesting that Todd earned degrees at two Baptist institutions; yet he now serves as a pastor at a Presbyterian church.

On Saturday, Todd published An Appeal to the Organizers of Together for the Gospel.  That evening some of our commenters began discussing Todd's appeal to the T4G organizers, and as you might imagine, there was a range of opinions.  Here are two excerpts that caught our attention (see screen shots below). 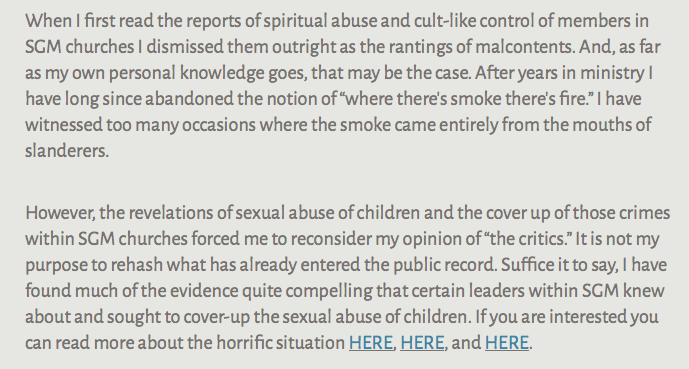 You can click on the links in the above screen shot HERE, HERE, and HERE.

Todd Pruitt received so much feedback from this appeal that he wrote a follow-up post, which was published earlier today.  In it he stated that:

And, as you can imagine, the feedback has ranged from “thank you” to “how dare you.” That is fine. I don’t mind the pushback (so long as it’s civil). I wrote something for public consumption so public disagreement is not inappropriate at all.

Interestingly, he includes 9 points to clarify his position.  These are the ones that stood out to us: 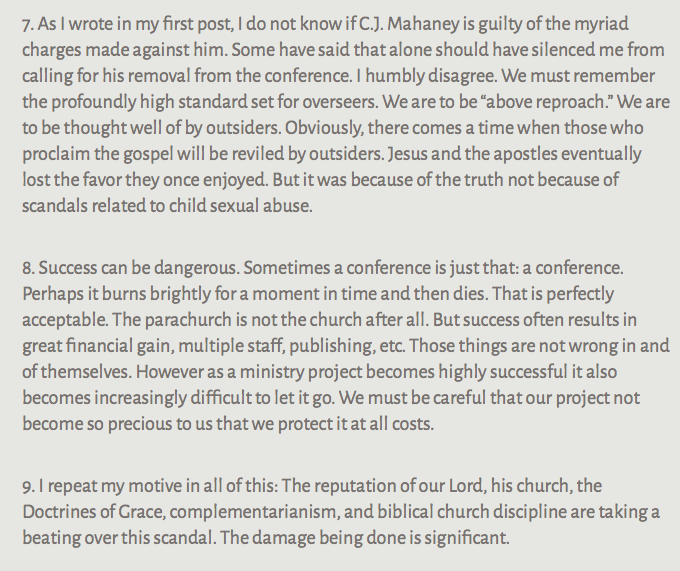 (2) Mark Ammerman, Pastor at Grace Evangelical Congregational Church, Lancaster, PA, sent the following correspondence to T4G leaders, which we have been given permission to share with our readers:

Dear brothers of Together for the Gospel,

With sadness my family sends this letter concerning your recent silence on the request to remove CJ Mahaney from the plenary lineup at T4G 2016. We write to echo that request made by the Survivors Network of those Abused by Priests (SNAP), but we do so with love and respect for the organizers and conveners of Together for the Gospel. We have benefitted greatly from the ministry of many of the men who will be speaking this year. I have personally heard many of them preach (at churches and Desiring God conferences and on the Internet), and have several of their written works in my library.

Our request concerning CJ is no knee-jerk reaction to cyber-gossip, but a reasoned request made after years of thought and prayer concerning the issues surrounding the man and his movement. And so we (the Ammermans) implore you (as men of God who must give an account for those who will gather with you in Louisville this week—and for a watching world): do not let power, position, popularity, pride, friendship, fear of man, charisma, mammon, doctrinal camaraderie, or any other thing cause you to forget that God is near to the broken-hearted victims of sexual child abuse. Don’t sideline the wise, prayerful, and reasonable pleas of your brothers and sisters in order to headline a man who (no matter how you may feel about him personally) is in the middle of one of the largest ongoing sex abuse scandals in evangelical history. Please put the greater concern for the “least of these” above your desire to honor a favored son in your midst.

The many victims of child abuse within the churches of Sovereign Grace are like the man who was robbed and beaten and left half dead on the road to Jericho (Luke 15:11-32). The Church has looked away from him and walked on the other side of the road for too long! Will you be the neighbor that our Lord commands us to be? Or not?

Please remember that the world is watching. In our day there are cameras on the Jericho road.

Sincerely yours in the Good Fight of the Faith,

(3) Todd Wilhelm, who lives in Dubai and blogs at Thou Art The Man, sent the following correspondence to Mark Dever, Al Mohler, and Ligon Duncan.  He included it in the comment section of this post. Here is a screen shot: 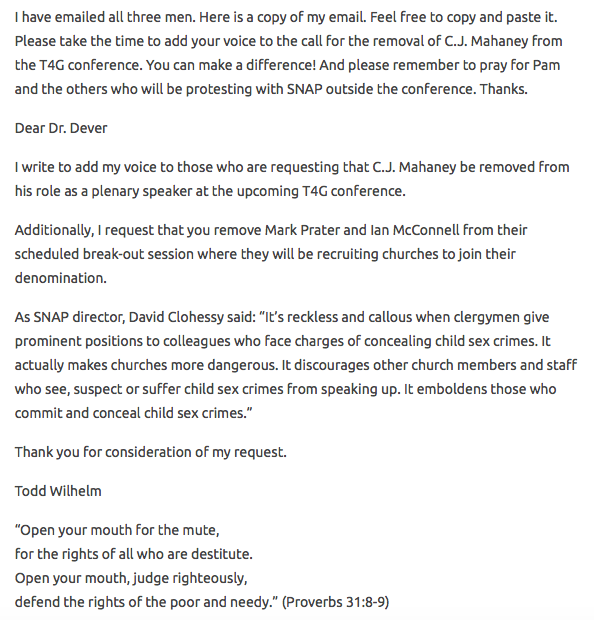 Perhaps these three individuals have been more inspired by Martin Luther than the organizers of T4G.  They have penned their concerns and now they have been published for the entire world to see.  Imagine what Luther could have done with the internet!

As we announced last week, Pam Palmer and her husband will be protesting outside the KFC Yum! Center along with local representatives from SNAP and others.  The Courier Journal has just published an article about the protest.  Here is the pertinent information:

Leaders with the Survivors Network of those Abused by Priests plan to protest outside the conference Tuesday from noon to 2 p.m. by speaking out about the allegations against Mahaney and the church he formerly pastored, Sovereign Grace Ministries. It was a denomination comprised of a network of dozens of churches now known as Sovereign Grace Churches. The denomination moved its headquarters from Maryland to Louisville.

Please keep those who will be protesting in your prayers.  These are the unsung heroes who are working diligently to defend the defenseless – innocent children.