The fascination of shooting as a sport depends almost wholly on whether you are at the right or wrong end of the gun. -P. G. Wodehouse link 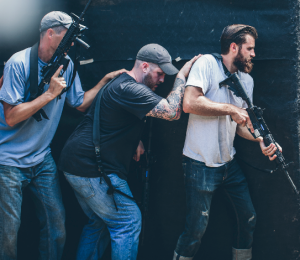 Before I begin, I do not want anyone to think we are speaking out against responsible gun ownership. The Deebs both have concealed weapons permits. Somehow, John Piper's promise to protect women from muggers did not make us feel particularly safe and we took matters into our own hands.

With that taken care of, let's review the last post which raised the question: Do the Complementarian Mandates of Submission and Male Leadership Attract Domestic Abusers? TWW believes that just like naive and trusting youth ministries attract pedophiles, the complementarian belief in male only headship and authority along with expectations of female submission will attract men who are prone to domestic violence.

We also stated that not all complementarians are abusers. However, we believe that poor exegesis on the part of preachers along with a male-centric theological emphasis leads men in the church to overlook the probability that they are inadvertently, and as you shall see, actively contributing to the problem of the abuse of women in the church. We believe that much of the blame lies squarely in the laps of seminaries and big dog, celebrity preachers.

Today, I had an hour to get a pedicure which was long overdue. The young man who took care of me announced that he was a Christian and that he could cause my arthritis (which is quite evident in my feet) to go away simply by commanding it. He then commanded the arthritis to leave me and told me it would be gone by tomorrow. I am NOT making this up. After a discussion about my beliefs on healing which ended in him telling me to send him a picture of my new feet tomorrow, I decided that it was my turn to ask him a question.

"What does your church do if a man abuses a woman?" This young man smiled and said "It is usually the woman's fault because she gets the man angry." He then went on to say that they teach the woman how to treat the man better. Can you imagine? Perhaps you are thinking that this poor man is ill educated and that most educated men know better. Well, here is my attempt to refute that notion.

Paige Patterson, President of Southwestern Baptist Theological Seminary believes women should go home to their abusive husbands. This was said at a conference endorse for The Council of Biblical Manhood and Womanhood.

It is important to understand that many men in the church, particularly those who believe in male only leadership, don't get abuse. This includes the so called leaders who teach the next generation of naive leaders. We wrote this post A Call for Paige Patterson’s Resignation From the Ministry in 2009.

This talk was given to The Council of Biblical™ Manhood and Womanhood which appears to endorse this sort of thinking while at the same time announcing that complementarians are really good at being *against* abuse.

Let’s start with Patterson’s view on domestic violence.  Guess what?  We have his own words on this subject, and he's very proud of himself.  This transcript is also available in audio via the internet.  It requires a bit of a search because someone, who realized Patterson’s words are damning, attempted to expunge the record.  They were uttered before the internet became an important factor in everyday life, so we're certain Patterson never realized his address an a conference sponsored by the Council on Biblical Manhood and Womanhood(CBMW) would become available to the general public.  In fact, when we came across his view on domestic violence, we didn't know anything about CBMW.  That's what alerted us to this organization.

Patterson: I am happy about your black eyes.

Here are Patterson's exact words. Deb spent hours obtaining the audio and transcribing it carefully. It is shocking.

“The Southern Baptist Outpost has an article with an excerpt from audio recordings and transcripts from a conference in 2000, in which Paige Patterson explains the counsel he gave one battered woman. Here’s the quote the Outpost posted:

And in the meantime, you have to do what you can at home to be submissive in every way that you can and to elevate him.  Obviously, if he’s doing that kind of thing he’s got some very deep spiritual problems in his life and you have to pray that God brings into the intersection of his life those people and those events that need to come into his life to arrest him and bring him to his knees.”

Patterson believes you must have 2-3 witnesses to accuse a pastor of sex crimes.

In another instance, in which Patterson was accused of covering up the sexual misconduct by his protégé, Darrell Gilyard,. He attempted to obfuscate a number of accusations made by a number of women  against Gilyard by saying that each complaint needed to be backed up by 2-3 witnesses!. Gilyard would eventually go to jail for his conduct.

“First Baptist officials said they knew of the allegations of sexual misconduct, which began as long as four years ago when Mr. Gilyard was removed as assistant pastor of Concord Missionary Baptist Church in Oak Cliff. But they said they did not believe those allegations, and continued to recommend him. "We were dealing with a man of special gifts and talents,' Dr. Patterson said. "I was unwilling to call anyone guilty until I had demonstratable evidence that these allegations were true.' Dr. Patterson said that according to Scriptures, action cannot be taken against a minister accused of adultery unless there are two or more witnesses. He also asked for any other proof, such as photographs, videotapes or laboratory tests!”

Paige Patterson will host a men only banquet in which guns will be given away on February 20, 2016

Consider Patterson's views on abuse. Now, let's take a look at this upcoming  Men's Game Banquet at Southwestern Baptist Theological Seminary of which he is the reigning president.

Many of you may not know that Paige Patterson fancies himself as the quintessential brave, masculine big game hunter. Yes, he does sound a bit like his pal, the now disgraced Doug Phillips who saw himself as a modern day Indiana Jones. Patterson just loves to go on safari with big guns and shoot the living daylights out of big animals. Holding his gun, he portrays himself as a brave and tough man's man.

Men and boys only club

Although this is on the campus of SWBTS which has women students, this gathering is not for women. Why?

Join us for the Men's Game Banquet on February 20, 2016  at 4:00pm on the campus of Southwestern Seminary.  Hear a special message from SWBTS President Dr. Paige Patterson, and Tecomate President David Morris.

Door prizes will be presented.  This event is for Men and Boys only,

The prizes: Lots and lots of guns, including one signed by Ted Cruz!

Thanks to our generous sponsors, we will be giving away more than $20,000 in door prizes at this event. Prizes include:

So, we are left with a man who believes that a woman should go home to be beat up by her spouse. He also believe that one needs 2-3 witnesses to prove that he/she has been raped or molested by *a man of God.* His utterances give aid and comfort to those men who are abusive to their spouses. Years later, he is holding a "Men Only" banquet since it appears that only men should be interested in shooting and killing large animals. He is willing to give lots of guns away to the men who attend his banquet.

I believe that women are not safe because of men like Paige Patterson. Yet Patterson has the endorsement  of The Council of Biblical Manhood and Womanhood which is closely tied to The Gospel Coalition. When these men shout that complementarians protect women, their utterances ring hollow. Keep doling out the guns, boys, along with the rhetoric of submission and male only leadership while women continue to be abused in evangelical churches. Somehow I do not believe that Jesus would spend time posing with his guns and stuffed big game conquests.

Let's see. We have women submit to male leadership and authority. Let's throw in guns and violence to the mix and see what happens.

If you have a moment, go over to the Game Banquet link and scroll down to watch the *Lion Promo* and tell me what you think.

PS: I will let you know how my arthritic feet look tomorrow after they are healed.