And now we welcome the new year. Full of things that have never been.- Rainer Maria Rilke link 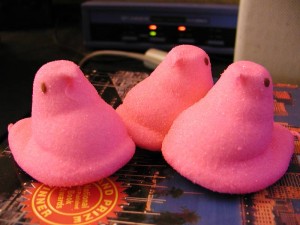 Peeps in the air

Happy New Year, folks. In celebration of 2016, today will be a fun post which will rely heavily on the humor of TWW readers. To start us off on the right foot, here is a list of 36 interesting things that ceremoniously dropped from the sky on New Year's Eve. It appears that North Carolina holds the state record with 5 of the 36, including the city of Raleigh which drops an acorn. My personal favorites include:

Peeps’ parent company, Just Born, calls the eastern Pennsylvania town home, which is why Bethlehem drops a 4.5-foot tall, 85-pound, illuminated Peep to mark the new year. Though Peeps come in shapes to suit every holiday these days, the drop is done with a traditional chick that flashes different colors at midnight.

Why the town would create a 3-foot-tall, 30-pound wooden flea is a real head scratcher—unless you know that the town was once known as Flea Hill.

Most carp don’t see 15 seconds of fame, let alone 15 minutes. But every year in Prairie du Chien, Lucky the Carp is the center of attention when he’s lowered onto a throne to celebrate the new year. It’s the culmination of a week of activities, including hanging carp ornaments on a pine tree, the Carp Plunge (Prairie du Chien's version of a Polar Bear Plunge) and busting open a carp piñata. As far as we know, the piñata contains candy, not carp.

The area has sardine fishing and canning roots, but Eastport also drops a Maple Leaf as a friendly gesture to their Canadian neighbors across the bay.

If you're a cured meat connoisseur, you need to know that Lebanon bologna is kind of a big deal. That's why the city of Lebanon deems it important enough to ring in the new year with.

This year marks the third annual "Up the Cup" celebration in Savannah. The cup is sponsored by Wet Willie's, an establishment that serves frozen alcoholic drinks in—you guessed it—a to-go cup.

My absolute favorite is:

Peeps’ parent company, Just Born, calls the eastern Pennsylvania town home, which is why Bethlehem drops a 4.5-foot tall, 85-pound, illuminated Peep to mark the new year. Though Peeps come in shapes to suit every holiday these days, the drop is done with a traditional chick that flashes different colors at midnight.

Did you know that the Peep tastes best when exposed to air for about 5 days? It becomes chewy!

Leeman felt that the *key* being dropped on New Years Eve in Maryland was a heresy since only CHBC and Mark Dever hold the *keys.* He grabbed the ceremonial key and ran. Before he was arrested, he discovered the key belonged Pat Robertson who owned an orange 1970 AMC Gremlin which was voted one of the 50 ugliest cars ever produced.

In 2012, the city of Frederick began the tradition of dropping a 5-foot by 2.5-foot wooden key from a suspension bridge. Why a key? To honor one of its most famous sons, of course—The Star-Spangled Banner lyricist Francis Scott Key.

Last we heard of him, he was headed for Key West, hoping that Jimmy Buffet would help him produce a hymn seeking "the lost keys of Margaritaville."

The screenplay was developed from the following interview: In Tearful Interview With Brian Houston, Mark Driscoll and Wife Reveal How God Told Them to Resign From Mars Hill Church. Driscoll recounts this paranormal experience.

"Our plan was to come back as volunteers. On that Monday night, I was in the bedroom, Grace was in the living room. He (God) spoke to me and He spoke to her in a supernatural way that neither of us anticipated or expected," Driscoll began in explaining how God change his course.

"It's not what we agreed to and it's not what we planned for, and so I asked her 'What did the Lord say to you?' Because I didn't want to influence her and she said …"

"She said 'Well, what did He say to you?' I said 'the Lord revealed to me a trap has been set, there's no way for us to return to leadership.' And I didn't know what that meant or what was going on at the time. He said we're released and we need to resign.

"This is not what we anticipated and a lot of people thought 'maybe he's got another plan.' We didn't, we didn't know what we were doing and Grace fell to the floor and she was just sobbing uncontrollably. I'd never seen my wife like that, she was devastated," explained Driscoll who tried unsuccessfully to hold back his tears.

Cruise agreed to portray Driscoll after Driscoll signed a document vowing never to drive a bus within one mile of Cruise. Rumor has it that Steven Spielberg will produce the special effects for the demon trials.  John Piper will make a cameo appearance in which he will hug Driscoll and Driscoll will punch him out.

3. CJ Mahaney elected President of the SBC and Peter Lumpkin collapses on the floor of the convention after the vote.

CJ Mahaney converted, once again, and has come out as Baptist. After the vote, it was discovered that CJ had donated money to pay for sabbaticals, ministries and blogs for many of the movers and shakers of the Reformed Baptist crowd and those that love them. Unfortunately, he is now on food stamps. The question is "Will his friends reciprocate?" John Piper runs on the stage to hug Mahaney while EMTs carry Lumpkin out on a stretcher.

Recently, Piper came out against Christians arming themselves against break-ins, etc., apparently believing that Christians need to take one for the team. However, in his reading of Scripture, he discovers that one only has to "turn the other cheek." It says nothing about kicking your opponent where it hurts. Unfortunately, Piper had to leave the program when it is discovered that he is surrounded by muscular women and feels their physical attributes pressed upon him.

In the meantime, due to arthritis in his arms and hands, he is taking to flashing emoticons (1 every 5 seconds) to help the audience know when he is being serious which is pretty much all the time. It appears that people are laughing at inappropriate times.

5. Robert Morris and Chris Hodges of the ARC portray themselves in the new movie, Ghostbusters.