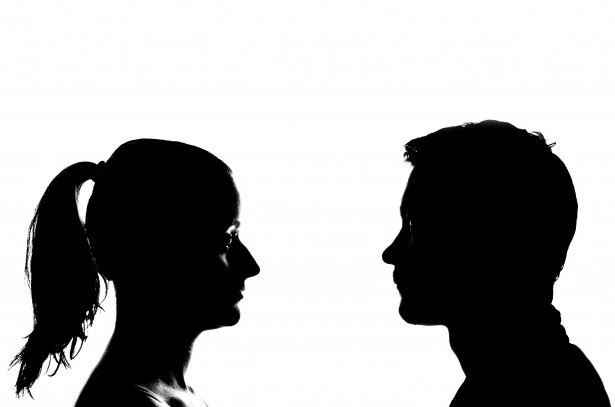 Next month marks the 28th anniversary of a clandestine meeting that took place in Danvers, Massachusetts.  It was at this gathering that the term 'complementarian' came into being.  And, as most of you know, the document that resulted has come to be known as the Danvers Statement on Biblical Manhood and Womanhood.  The organization that birthed the Danvers Statement is known as the Council on Blblical Manhood and Womanhood.

Is CBMW really going as strong as Strachan claims?  One indication should be their financial statements, which are submitted to the Evangelical Council for Financial Accountability (ECFA).  According to the ECFA website, CBMW has received a steady increase in donations over the last several years.  In 2012 revenue was around $100,000 with expenses slightly outweighing revenue.  In 2014 CBMW's total revenue was just over $262,000 with expenses amounting to approximately $187,600.

Sounds pretty good until we take a look at CBMW's rival – Christians for Biblical Equality (CBE).  According to CBE's member profile on the ECFA website, their total revenue last year was approximately $829,000, with expenses totalling around $704,000.  In 2012 CBE's revenue was around $750,000.  On the eve of the annual gathering of the Evangelical Theological Society, we find this comparison between CBMW and CBE interesting since each group will have a booth at the ETS event in Atlanta.

Since Strachan claims complementarianism is surging, who is promoting CBMW?  Of course, Southern Baptist Theological Seminary tops the list since it provides CBMW's housing.  The other Southern Baptist seminaries also promote CBMW, as do Southern Baptist churches that strictly adhere to the BFM2000.  Then there's the Presbyterian Church of America.

And lest we forget, there's the 'family' of Sovereign Grace Churches, which recently featured Owen Strachan at their Pastors Conference.  He did a breakout session on the topic Strengthening our Complementarian Convictions.  In recent years C.J. Mahaney has been absent from the speaker line-up of the SGC Pastors Conference, but this year he was back in the saddle.  His message — Sustained in Suffering by the Saga of Job — appears to be a compilation of messages he preached at Sovereign Grace Church Louisville, where Mahaney and Jeff Purswell have been working their way through Job for the last few months.  Finally, it was interesting to see Crazy Busy Kevin DeYoung listed as one of the main sesion speakers.  That's the same Kevin DeYoung who served on the three-man panel that deemed Mahaney fit for ministry back in 2012.  Never ever forget that when the Sovereign Grace Ministries leaders appointed the three-man panel, they kept their identities secret until the report was published.

Getting back to Strachan's artcle in Patheos, almost all the comments were critical of complementarianism, Calvinism, etc., and a number of commenters balked at the title of the article – Why Complementarianism Is Surging…

Of course, Strachan (who happens to be Bruce Ware's son-in-law) is working social media hard to promote the upcoming Together for the Gospel Conference as well as CBMW's Pre-Conference.  Here is just one example (see screen shot of Strachan's Tweet): 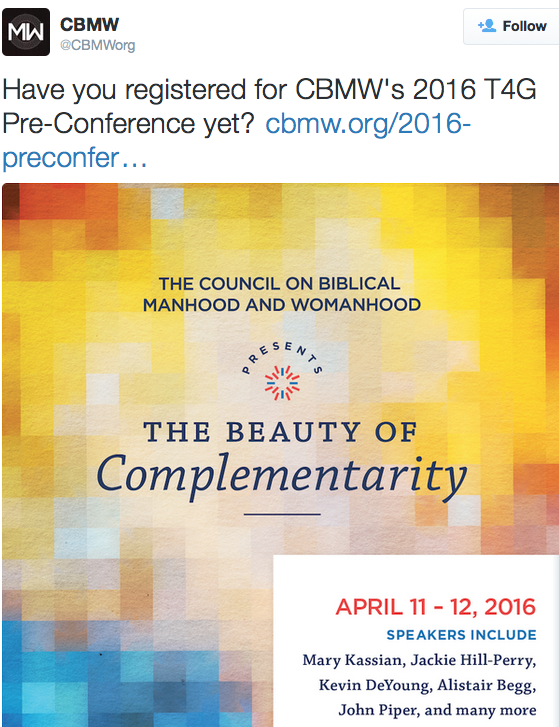 T4G is less than five months away, and the pressure is on!  Not only is Owen Strachan and gang pushing the main event, but also CBMW's pre-conference. In 2014 CBMW held its 'Brave New World' pre-conference, and this how Strachan described the event:

We recently held our first CBMW National Conference in conjunction with the 2014 Together for the Gospel conference. We wanted to present an event that would be gospel-focused, positive, and exciting.

These were our starting points, but we honestly didn’t know what to expect. We thought that we might have 500 people. Then people started signing up, and kept signing up. So we went back to the book publishers that were among our event sponsors and asked them to greatly increase the amount of books that they were giving, and they did. Then even more people signed up, so we went back to the publishers one more time, and they were gracious to give even more books. Finally the day of the conference came, and God brought close to 1,500 people. We sold every single seat and then several dozen “standing room only” seats. Wow!

Perhaps attendance at CBMW's pre-conference will exceed expectations again next year; however, it's important to point out that complementarianism has been around for almost 30 years, and even though the champions for the cause have garnered thousands of loyalists who attend these bi-annual conferences, we do not see this as a 'surge'.  There appear to be far more Christians outside the complementarian camp, and with the recent blunders made by some complementarian leaders, we don't believe this movement will continue to grow.  That's our opinion, and we're sticking to it…