"I wanna get my church straight like it has been." 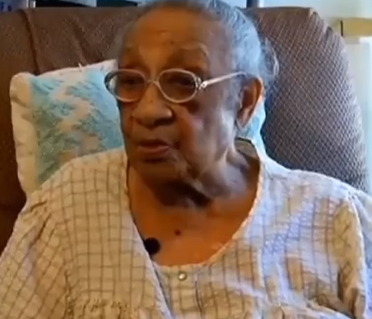 A week ago we joined in on the public outcry against the termination of Genora Hamm Biggs' church membership.  The 103 year old had been a member of Union Grove Baptist Church in Elberton, Georgia for an incredible 92 years!  The newly hired minister, whom the congregation assumed would follow their Baptist tradition, began to move the church in a 'holiness' direction, primarily through his preaching style.

On August 2, 2015, Reverend Tim Mattox and members and officers of the church sent Genora Biggs this letter (see screen shot below). 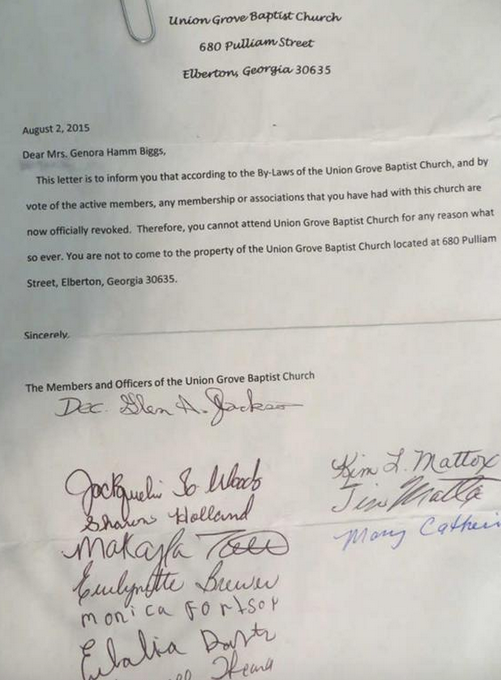 When Genora Biggs showed up at church anyway, Rev. Mattox called the police to have her removed.  The common sense law enforcement officers saw this for what it was — a church conflict — and refused to get involved.  Biggs told Fox News 5 that "nothing can keep her from attending church services at the Union Grove Baptist Church".  The church conflict went on to receive national attention.

Nearly two months later the congregation has reconsidered its actions and has voted out Reverend Mattox. According to an article in Christianity Today:

Members of a Baptist church in Elberton, Georgia, have voted to oust their pastor after he fired a 103-year-old member of the church who had expressed disagreement with his practices.

The members of the congregation cast their vote on Sunday removing Rev. Tim Mattox from the Union Grove Baptist Church after he revoked the church membership of Genora Hamm Biggs, who has been attending the church for 92 years.

Genora Biggs, who has previously served as church secretary and who taught Rev. Mattox in school, dared to stand up for what she believed was right.  The CT article includes this quote by Biggs:

"He's a holy, sanctified minister – we are Baptist and he has divided the church," she said, adding that Mattox is not following the Baptist Church covenant and is trying to change the denomination.

The Atlanta Journal Constitution is monitoring developments at Union Grove Baptist Church, and has provided this update:

On Sunday [September 20th], members of the church who disagreed with his stewardship voted to fire Mattox as pastor, but he has ignored that vote.

The church members who voted to fire Mattox issued him a “Letter of Termination” and ordered him to remove his property from the church, according to a report in the Athens Banner-Herald.

On Tuesday he obtained restraining orders against the grandson of Biggs and a former church secretary, according to the Banner-Herald.

A hearing is scheduled in court for Oct. 5.

As a Southern Baptist who is deeply concerned about changes taking place in my denomination, I have been inspired by this 103 year old Christian woman.  I am angered by Neo-Calvinist pastors who have misrepresented themselves to Non-Calvinist congregations and brought strife and division to the churches they have been called to 'serve'.  Their stealth takeovers are inexcusable.

One of the reasons we blog is so that we can alert our brothers and sisters in Christ about these trends within Christendom.  After much research and discussions with those who have experienced these takeovers first hand, we know the warning signs.  Just like Genora Biggs who was alarmed by her pastor's 'holiness preaching', we are alarmed by pastors who want to:

– Make drastic changes in the theology being taught (Calvinist vs Non-Calvinist).

My prayer is that should any of us ever find ourselves in situations similar to Genora Biggs — where a newly elected pastor attempts to implement changes that our congregations oppose — we will have the courage to stand up and let our voices be heard.  One voice can make a HUGE difference, as Biggs has clearly demonstrated.  What an incredible legacy she will leave when she steps into eternity, ascending to her heavenly home.

Please pray for the upcoming court proceedings involving Union Grove Baptist Church and its former pastor.  We will do our best to keep you updated on this most fascinating church conflict.