"As I look back at my experience at Mars Hill, one of my largest areas of personal sanctification and theological growth occurred in the area of repentance and forgiveness, especially in my role as a high-level church leader." 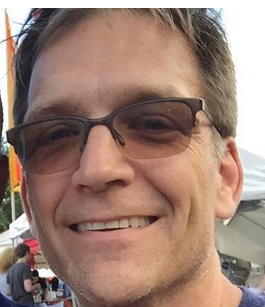 Sutton Turner, who will be indelibly linked to Mark Driscoll and the now defunct Mars Hill Church, recently posted his thoughts on repentance and forgiveness.  More on that later in the post.

In case you're not familiar with Turner, he has previously stated that since 2007 Mark Driscoll had a significant influence on his life.  He was obviously so impressed with Driscoll that he withdrew from the business world in 2011 and began working at Mars Hill.  The following year, Turner issued a dire warning in an internal memo that Warren Throckmorton posted on his website.  Here is a screen shot from Turner's March 17, 2012 memo. 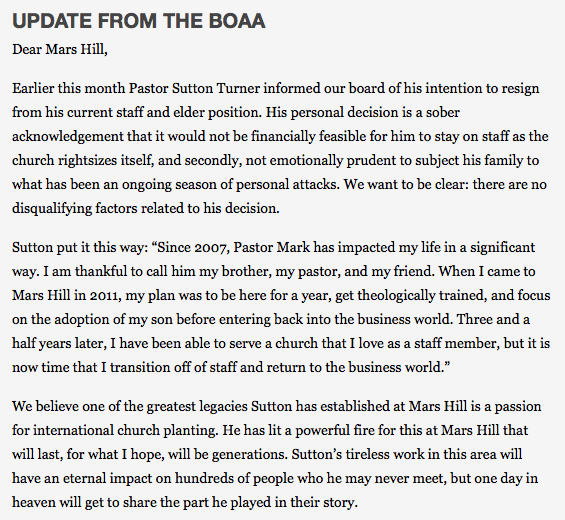 So much for Turner's generational influence on Mars Hill's international church planting…  Looks like 'King Turner' had an impact on not just hundreds but thousands of people whom he never met.  Some former members may never recover from the harm they suffered at the hands of Mars Hill elders.

It appears Sutton Turner has been doing some soul searching since resigning from his position at Mars Hill Church last year.  Last week he published posts on repentance and forgiveness.

As I look back at my experience at Mars Hill, one of my largest areas of personal sanctification and theological growth occurred in the area of repentance and forgiveness, especially in my role as a high-level church leader.

I am writing this post to help other leaders like me. I pray that someone—even just one person—can be spared the consequences of his/her own mistakes by paying careful attention to mine beforehand. I also pray that my public confession of sin and admission of mistakes will further enhance opportunity for reconciliation and restoration among those with whom I have experienced conflict.

Early on in my time at Mars Hill, I unfortunately operated in a sinful way that was consistent with the existing church culture that had grown and been cultivated since the early years of the church. Instead of being an agent of change for good, I simply reinforced negative sinful behavior.  (I am responsible for my own actions, and do not blame my actions on the culture.) I am so thankful for the kindness of God that has led me to repentance, the grace of Jesus that forgave my sin, and the love of brothers who exhorted me during those necessary times of growth. Somewhere between 2012 and 2013, with the help of Pastor Dave Bruskas and others, change began to take root in my heart. These lessons continue to bear fruit in my life as the Holy Spirit grows me to become more like Jesus. I do look back on 2011 and 2012 with a lot of regret, but I’m also very thankful for the Holy Spirit and his ability to grow us all to be more like Jesus.

In Part 2, Turner describes nine practical lessons on repentance and forgiveness.  They are:

3.  Have empathy for others.

6.  Forgive those who will not meet with you.

7.  Forgive those who have sinned against you.

8.  Accept that forgiveness does not automatically mean reconciliation.

9.  Outdo one another in showing honor.

Turner provides an explanation for each of these lessons.   Here is a screen shot he included at the top of Part 2. 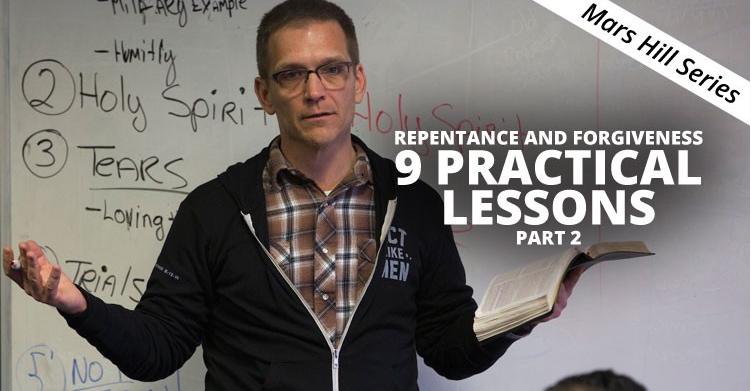 How very interesting that Turner published these posts right after Mark Driscoll delivered his Paul the Forgiven sermon at James River Church on Sunday, June 7.  Coincidence?  We think not.  In case you're interested, we shared our thoughts regarding Driscoll here.

Wenatchee the Hatchett, who for years has done a yeoman's work in reporting on Mark Driscoll and Mars Hill Church, weighed in on Sutton Turner's posts (see links below).

9 practical reads like 9 pious bromides, we may need to review the scope of the legacy

Warren Throckmorton had this to say regarding Sutton Turner's initial post:

In light of Dan Kellogg’s and John Lindell’s dismissal of Mars Hill problems, Turner’s disclosure that he operated in a “a sinful way that was consistent with the existing church culture that had grown and been cultivated since the early years of the church” is worth noting. Turner does not mention Driscoll, but everybody knows who was in charge of the church from the beginning. Turner does not mention Driscoll as a help in overcoming that culture, but instead credits Dave Bruskas and unnamed others.

I know there are several people I have interviewed who would encourage Turner to add 2013 at least, and probably 2014 to his list of dates which should be regret-worthy. Having said that, I think Turner’s approach here has much to recommend it. He then reflects on forgiveness which, because of the way he started his post, doesn’t come across so self-serving as does Mark Driscoll’s two recent sermons on the subject.

I recognize that those who served at Mars Hill and former members will have varying reactions to Turner’s reflections. Inasmuch as bitterness remains, I hope the parties can reconcile.

We hope the parties can reconcile as well, but it certainly appears that Mark Driscoll and his former right hand man have some work to do with regard to reconciliation.

In the meantime, Sutton Turner has obviously distanced himself from Mars Hill Church, as his website shows. 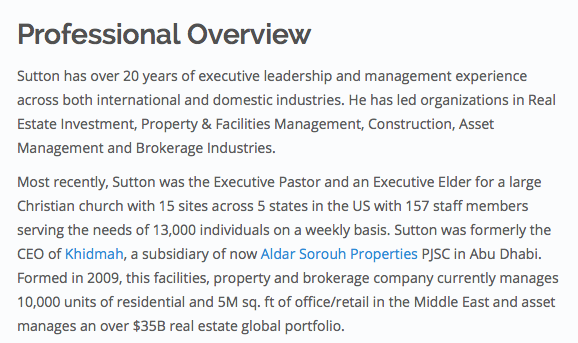 No doubt Sutton Turner has definitely learned a hard lesson.  We look forward to seeing what happens in his life and career in the wake of these repentance and forgiveness posts.