"Join us as we welcome guest speaker, Pastor Mark Driscoll, while he presents Paul the Forgiven…Pastor Mark Driscoll speaks from Acts 6:8-15 to discuss the importance of forgiveness in our own lives through the example of the Apostle Paul."

Meanwhile, here's what was communicated 'Down Under'… "Houston, we have a problem." 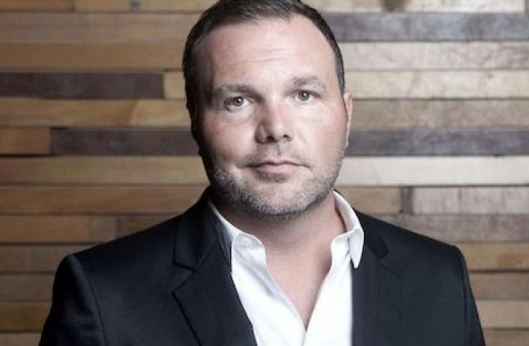 As I was getting ready for church last Sunday morning, I quickly checked my Facebook feed for any news and saw the this headline (see screen shot below):

I 'shared' the article from an Australian news source, along with a comment:  "Mark Driscoll needs to step away from the microphone for a long season of contemplation."

The following excerpt from that article caught my attention:

"I do not want unnecessary distractions during our conference, particularly as this 30 minute interview was only a small part of this five day event," Mr Houston said in a statement.

"It was clear to me that Mark's attendance had the potential to divert attention from the real purpose of Hillsong Conference, which is to see people leave encouraged in their own spiritual journey."

An online petition calling for Mr Driscoll to be removed from Hillsong's conferences had attracted more than 3000 signatures prior to Mr Houston's statement.

The US pastor, who has courted controversy for what has been dubbed his "more-macho-than-thou" brand of Christianity, resigned from his Seattle megachurch in October after being found "guilty of pride" as well as abusive, controlling and manipulative behaviour.

In the wake of this and other scandals, the Mars Hill Church collapsed.

But much of the Australian backlash has centred around Mr Driscoll's comments about women. 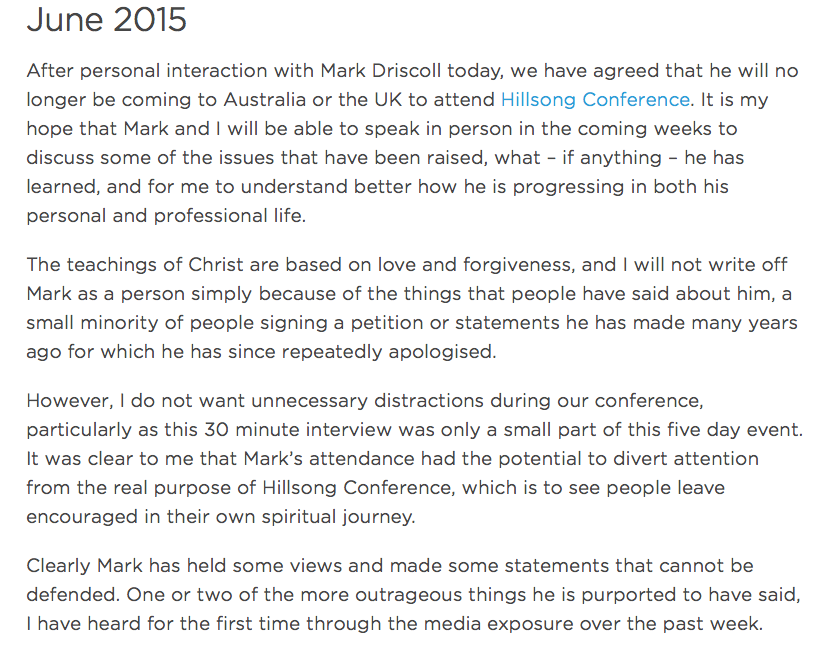 Warren Throckmorton quickly put up a post on this development and featured the following video.  (WARNING:  Includes graphic language)

Mark Driscoll, the preacher who stepped down from his Seattle megachurch in October 2014 after being accused of plagiarism, bullying and an unhealthy ego has been trying to return to some kind of speaking tour at Christian conferences. But the attempt was cut short Sunday when Hillsong, one of the most influential international megachurches, cut him from the speaker list at its upcoming conferences in the United Kingdom and in Australia.

Hillsong is an international megachurch based in Australia that has exported its influence to major global cities and into churches’ music across the United States. Hillsong’s founder, Brian Houston, released a statement saying he did not want the 30-minute interview with Driscoll to distract from the larger five-day conference.

“The teachings of Christ are based on love and forgiveness, and I will not write off Mark as a person simply because of the things that people have said about him, a small minority of people signing a petition or statements he has made many years ago for which he has since repeatedly apologised,” Houston said.

Meanwhile, Mark Driscoll was preparing to deliver his sermon at James River Church, an Assemblies of God megachurch located in the "Show Me State" (Missouri).  According to the Pastor John Lindell, Driscoll has spoken there on three other occasions.  In his introductory remarks, he spoke of Mark’s kindness, humility, and genuine interest in people.  Then he stated emphatically:

Now let me just say this to you today cause I have no apology for Mark being there;  I’m glad Mark’s here.  I’m honored that Mark’s here so I don’t want anybody reading what I’m saying as some kind of disclaimer or apology.  I’m trying to get people to understand it because there’s a whole lot of stuff that’s out there that’s being said, much of it is just just simply not even close to truth.  And how many know you can’t not everything you read on the internet is true, and so as a church I just I just know this, as a church we want to be careful that we don’t ever put ourself in a situation where we’re shooting the wounded, and you know God has laid Mark and Grace upon Debbie and my heart repeatedly over the last several months…

Mark' Driscoll's message has been uploaded on the church website, and we have included it here should you choose to watch it.

I have heard Mark’s message several times now and have some concerns.  First, he begins by praying that he wants to make this time just about God and His people; yet he appears to take the stories of Stephen and Paul and apply them to his own circumstance — at least that's how it sounded to me.

Interestingly, he chose the title of his message to be 'Paul the Forgiven' and goes on to say that Paul has a name change because of a life change.  He further states:  “A door was closed to who I was and a door was opened to who I became.”   I can't help but wonder whether Driscoll is talking about Paul or himself.  Of course, we have yet to determine whether there has been a real change in Mark Driscoll's life.  Not much time has passed since he stepped down.

Mark begins to describe what happened with Stephen in Acts 6:8-15.  Here are just some of the phrases he uses as he shares the story.

Some rose up and disputed with Stephen.

They stirred up the people… now the mob is forming.

And he set up false witnesses.

I sincerely hope Mark Driscoll's remarks are about this specific passage and not about himself.  Why am I concerned?  I am haunted by that infamous message where he appeared to use a Bible passage to describe what was about to happen to two Mars Hill elders.  Mark flatly denied it, but I believe we may be seeing a pattern here.  I hope I am wrong…

He spends the remainder of the sermon talking about Saul who became Paul and forgiveness.  As I listened, I couldn't help but wonder where things stand between Mark and those he threw under the bus.  Has he asked them to forgive him?

We would be interested in any thoughts you may have regarding Mark Driscoll's message.