"My mother used to tell me man gives the award, God gives the reward. I don't need another plaque." 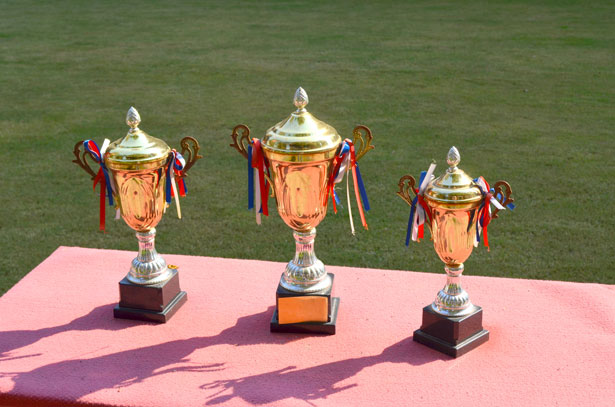 Last month the Evangelical Theological Society (ETS) gathered for its 66th annual meeting in San Diego.  Interestingly, the Council on Biblical Manhood and Womanhood (CBMW) held a banquet in that fine city at which two new awards were presented.

It was just before the ETS meeting held 27 years ago that the Danvers Statement on Biblical Manhood and Womanhood was drafted under wraps and CBMW came into existence.  Here is a brief summary according to the CBMW website:

The group next met at the Sheraton Ferncroft Resort in Danvers, Massachusetts, on December 2-3, 1987, before the 1987 meeting of the Evangelical Theological Society. The draft was adopted in meeting and called the Danvers Statement on Biblical Manhood and Womanhood. The group then voted to incorporate as the Council on Biblical Manhood and Womanhood.

The organization built steam for several years, running an ad in Christianity Today that drew a huge response. It was clear that CBMW represented the concerns of a large, and to that point relatively quiet, constituency. During this period, Grudem and Piper worked on assembling and editing essays for a project released by Crossway in 1991 entitled Recovering Biblical Manhood and Womanhood: A Response to Evangelical Feminism. Now known as RBMW (or, among younger complementarians, the “blue book”), the text was named “Book of the Year” by Christianity Today in 1992.

How that tome – Recovering Biblical Manhood and Womanhood – was named "Book of the Year" is beyond our comprehension…  We have a copy of it, and you can access it online here.

Since CBMW recently labeled itself as a Brave New Movement, we have to wonder how things are going.  How does an organization that has been around for close to three decades label itself as "NEW"?

Getting back to the awards…  Here is how their namesakes are described over at CBMW.

The scholarship award is named after CBMW founder Dr. Wayne Grudem and is titled the Wayne Grudem Award for Complementarian Scholarship. Dr. Wayne Grudem is known to most evangelicals around the world. He became Research Professor of Theology and Biblical Studies at Phoenix Seminary in 2001 after teaching at Trinity Evangelical Divinity School for 20 years. He has served as the President of the Council on Biblical Manhood and Womanhood, as President of the Evangelical Theological Society (1999), and as a member of the Translation Oversight Committee for the English Standard Version of the Bible. He also served as the General Editor for the ESV Study Bible (Crossway Bibles, 2008). Many know him because of his thorough and accessible Systematic Theology published with Zondervan in 2004…

Dr. Grudem has been the driving force behind CBMW since the organization’s inception. His books and articles have provided immense ballast to the movement. So it is in his honor and in light of his example that we are instituting this award for complementarian scholarship.

The leadership award is named after CBMW founder Dr. John Piper and is titled The John Piper Award for Complementarian Leadership.

John Piper is the author of over 50 books and now frequently travels to speak, and writes regularly, through Desiring God. He also serves as chancellor of Bethlehem College & Seminary in Minneapolis, Minnesota. He is the coeditor of Recovering Biblical & Manhood, the book that is the cornerstone of the complementarian movement. He has been a key leader in complementarian circles for four decades. He is a cofounder of CBMW and has provided exemplary theological leadership for the broader evangelical movement through his preaching, teaching, and writing.

﻿And here are the recipients of those awards…

It's a small world because a decade ago I attended the same Sunday School class as the Köstenbergers. My time in that class was short-lived, however, because there was a terrible conflict that divided the congregation.  It was absolutely horrible, and we left when the pastor resigned…

And twelve years ago my younger daughter was in the same Christian school class as the Köstenbergers' daughter.  Just before Christmas, all the fifth grade classes went on a field trip to an ice skating rink, and I remember meeting Margaret there for the first time.  I enjoyed my conversation with her, and I was impressed with her academic credentials since she has a doctorate of theology (which she received from the University of South Africa).

According to the CBMW article referenced above, Dr. Andreas Köstenberger is

Senior Research Professor of New Testament and Biblical Theology, as well as Director of Ph.D. Studies at Southeastern Baptist Theological Seminary. He is the Founder and President of Biblical Foundations™ (www.biblicalfoundations.org), an organization devoted to encouraging a return to the biblical foundations in the home, the church, and society. Dr. Köstenberger also serves as editor of the Journal of the Evangelical Theological Society. He has authored, edited, or translated over twenty books…

﻿Dr. Köstenberger earned his Ph.D. from Trinity Evangelical Divinity School (TEDS), (he holds other degrees as well) and we assume he developed a relationship with Dr. Wayne Grudem through that connection since Dr. Grudem taught at TEDS for 20 years until his relocation to Phoenix in 2001.

Not only that, a month before we started blogging in 2009, Acts 29 held a Boot Camp in Raleigh.  The speakers were Mark Driscoll, Wayne Grudem, Andreas Köstenberger and a few others.

The Köstenbergers have written a book entitled God's Design for Man and Woman, which was published earlier this year by Crossway.  As you can well imagine, it is being promoted by the complementarian crowd.

The recipients of the John Piper Award for Complementarian Leadership are familiar to our readers.  They are Dr. Albert Mohler (and his wife Mary) and Dr. J. Ligon Duncan III.  Dr. Mohler is president of Southern Seminary, a post he has held since 1993.  Dr. J. Ligon Duncan III is the Chancellor/CEO of Reformed Theological Seminary and also serves as the John E. Richards Professor of Systematic and Historical Theology.  Interestingly, the John Piper award recipients represent half of the original T4G team.  Our prediction is that Mark Dever will receive one of these awards next year.  Just sayin'.

Owen Strachan, CBMW president, summed up 2014 and shared what’s ahead for the new year by writing:

In 2015, we’re planning to make some big moves. Lord willing, we’ll be adding more staff, starting our podcast, and announcing new publishing projects. In order to get there, we’d love to partner with you in our December giving campaign. Our goal is to raise $30,000.

It will be interesting to see how well Strachan and his colleagues carry the torch lit by Piper and Grudem, among others, way back in 1987.  Now that two of the architects of the complementarian movement — John Piper and Wayne Grudem — will be remembered for many years to come through these CBMW awards, we thought it only fitting to leave you with a video that also immortalizes Wayne Grudem.