Somebody has to do something, and it's just incredibly pathetic that it has to be us."- Jerry Garcia link 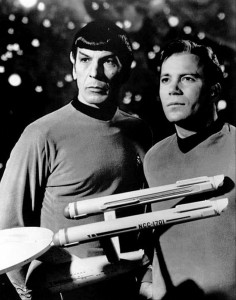 We have been receiving an incredible amount of information on the ARC, Robert Morris and Chris Hodges along with associated friends and relationships. It has been eye opening. It appears the Deebs have fallen down on the job and failed to fully recognize this growing and influential group of churches. The issues include lots and lots of money, rich lifestyles, authoritarian control, a seeming lack of congregational accountability, along with a fascination with dominionism and demonology. There are also some surprising friends of the ARC. Due the complexity of the issues involved, we have decided to wait until next week to focus on these issues so that we can check sources, find links, and carefully explore this strange new world.

When we started this blog, we had already done an enormous amount of reading on Sovereign Grace Ministries and other such groups. So we sort of knew what we were talking about when we started. Therefore, we want to be careful as we wade through the interesting religious views of this group. When we write, we want to be sure we are offering information that you can hang your hat on, complete with sources and links. So, hang in there, especially all those former ARC folks who have been so helpful in sending us information. We are going to take our time on this subject and plan a fair number of posts. Tune in next week as we wade into the morass.

In the meantime, I have been wanting to discuss the subject of this post for a couple of years and I keep putting it off. Recently, Her.Menuetics, at Christianity Today, published The Midlife Church Crisis written by Michelle Van Loon. Van Loon describes her experience while attending a newcomers luncheon at a church along with her husband. During this luncheon, the church staff seemed to zero in on the young families with children while this midlife couple, sans children, were pushed to the periphery. She says she felt like she had become

The apparent dumbed down role for baby boomers.

When the bulletin is filled with announcements for mothers of preschoolers’ gatherings, family camping weekends, and Vacation Bible School, I know I’m welcome to lend a hand by baking muffins or doing crafts. I’ve gotten the message that, now that my own children have grown, my role is to support the real focus of the church: families.

She places the blame squarely on the shoulders of the Baby Boomers.

Decades ago, baby boomers and older Gen Xers pushed to create churches centered on the young, nuclear family. Sadly, this ministry model now excludes many of us

And this is a big, big mistake on the part of the church. Did I say a BIG mistake?

The Barna Group released the results of a study in a post Barna Describes Religious Changes Among Busters, Boomers, and Elders Since 1991. The findings should open the eyes of many churches. Here is what they have to say about the Baby Boomers.

No generation has been as widely chronicled as the Boomers, the post-war group born from 1946 through 1964. At every stage of their existence, this generation has redefined America’s ways of life – including its faith and spirituality. Four of their six religious behaviors and two of their eight religious beliefs tracked in this study have undergone statistically significant change since 1991.

The four religious behaviors that shifted included the following.

The pair of religious beliefs that have yielded substantial change in the last two decades are declines in those who hold an orthodox view of God (down six points, to 67%); and a reduction in those who are strongly convinced that the Bible is totally accurate in all of the principles it teaches (down seven points, to just 38%).

In other words, Baby Boomers are increasingly opting out of church.

Quick history on the youth culture in today's churches

This is Dee's perspective on the history of which she was a part. The 1960s and 1970s saw the birth of the Jesus movement amongst the young people. Here is a half decent synopsis from Wikipedia.

The Jesus movement was a movement in Christianity beginning on the West Coast of the United States in the late 1960s and early 1970s and spreading primarily through North America and Europe, before dying out by the early 1980s. It was the major Christian element within the hippie counterculture, or, conversely, the major hippie element within some strands of Protestantism. Members of the movement were called Jesus people, or Jesus freaks.

During that time period, churches became focused on drawing in the large numbers of young people who were finding faith within this movement. The "let's make room for the youth" became a rallying cry of forward thinking churches. The mantra of focusing on the youth for the health of the church was born during this era and continues to this very day. Here is where it gets interesting.

Take a look at this census chart produced by the CDC and reproduced on Wikipedia. See what happens with the birth rate in the US. The Baby Boomers consist of those born through 1964. Now watch the sharp decline in births thereafter. 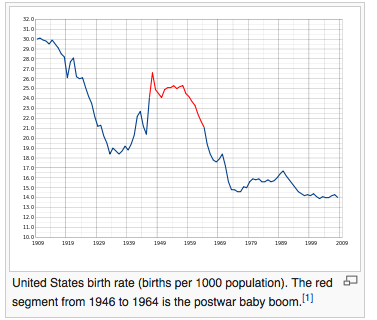 Churches were smart to focus on the youth of the Jesus movement. They were the Baby Boomers. Church growth became predicated on attracting the large youth population and churches have continued to be youth focused. In so doing, it appears that they have marginalized the aging Baby Boomers who are beginning to drop out of churches.

Take a look at this article to confirm my thoughts. Boomers to Control 70% Of US Disposable Income. Here are their observations.

In the meantime, banks are foreclosing on churches at increasing rates link and link.  From the Christianity Today article

Before the 2008 economic crash, church bonds had strong investment appeal due to a decades-long safety record. Now, "the market has disappeared," said Leonard. "The options for a new church trying to build a building are significantly reduced. We'll see fewer buildings."

Let's go back to Michelle Van Loon's post for some further insight on church and the mid life crisis.

a little less than half said they’d scaled back their involvement from what it had been a decade ago. Those who had downshifted or left cited weariness with church politics, increased career demands, significant time devoted to caring for parents or grandchildren, health issues, and a sense that they’d somehow outgrown their church. “I’m tired of the same programs year after year,” one said. “I want deeper relationships with fewer people, more spiritual exercises like prayer and meditation than the canned studies offered.”

Van Loon points to some anecdotal evidence that multigenerational planning as opposed to young family focus can help.

Anecdotally speaking, it seemed that those over age 40 who discovered meaningful service, worship, and connections reported that their church was committed to intergenerational ministry rather than family-centered, child-focused programming.

She makes an important observation about the youth focus of many churches.

When we church leaders ape our culture’s obsession with all things young and cool—targeting the same desirable demographic groups as do savvy advertisers—we communicate to those who don’t fit those specs that they are less desirable.

I believe the church is making a serious mistake in blindly following the youth strategies born of the 1960s, 1970s and 1980s. The demographics have changed and the church risks losing the very people who have experience, wisdom, time, and money to contribute to the church of the future. I find it concerning when many of today's churches have *elders* who are in their 20s and early 30s. The true elders, those with the wisdom, born of experience and years of prayer and devotion, are leaving the church, leaving behind an immature church. Caveat Emptor.