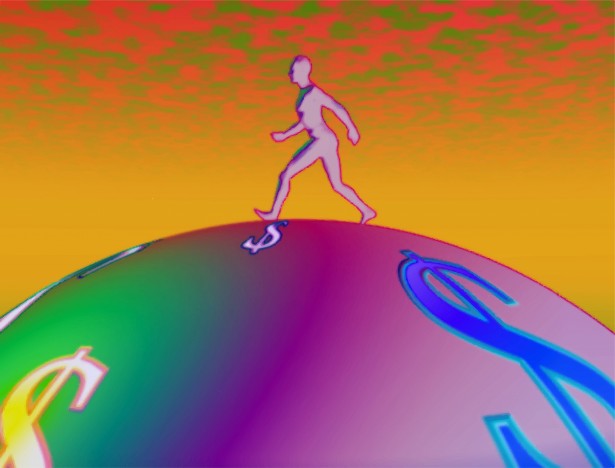 Mars Hill Church is making headlines again — this time because of its Global Fund.  Several years ago Sutton Turner (who has just resigned from the church) made the following declaration in a video (in addition to the above quote):

So whether you’re a member of one of our Mars Hill Church locations in the United States or you’re one of 100,000 podcasters every single week, we encourage you to pray about giving above and beyond your tithe to Mars Hill Global. Thank you and let’s see more materials translated, more pastors sent out, more churches planted, and more people saved by Jesus Christ.

A headline in The Stranger says it all — Internal Memo About Mars Hill's "Global Fund" Shows the Church Intended to Use Some of the Money to "Deflect Criticism" and Quietly Keep the Rest.

One of the controversies swirling around Mars Hill this summer has been the so-called "Global Fund" that didn't go so global. From a story The Stranger ran about Mars Hill back in August:

"In a July 2014 letter, Mars Hill admitted that millions of dollars donated to its Global Fund, which appeared to be bound for projects in Ethiopia and India, actually went into Mars Hill’s general fund, which raised questions about how much of the general fund goes towards Driscoll’s salary. Driscoll’s handlers have declined to answer questions about the scandal, but journalist Warren Throckmorton, who follows Mars Hill closely, reported that unnamed church insiders estimate less than 5 percent of the Global Fund actually made it overseas."

Warren Throckmorton continues to shine the spotlight on Mars Hill. In his post Mars Hill Global Fund: Help the Helpless or Use the Helpless, he published an internal Mars Hill memo that appears to indicate that the bulk of the funds raised was not used to 'help the helpless'.  Throckmorton concludes:

As we now know, most Global Fund money went to support Mars Hill expansion — which was the plan all along — without any plans to tell donors how their funds were being spent.

I contend that Mars Hill Church owes the public an explanation and Ethiopian and Indian church planters a lot of money.

The following day Throckmorton wrote about a significant name change — Mars Hill Global Fund Becomes Mars Hill Go.  The announcement was made on the Mars Hill website.  Here is a screen shot. 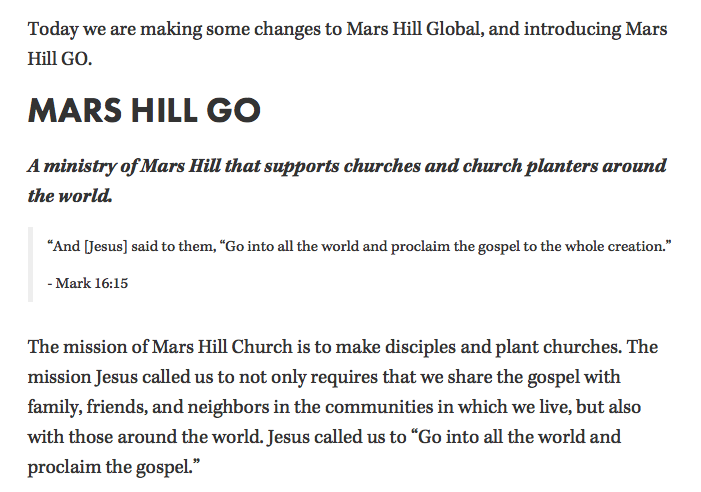 What is incredible about this change is that Mars Hill wants financial contributions to the Go fund to be unrestricted.  Take a look at this question and answer on the Mars Hill website that Throckmorton includes in his post …

Can I designate my current gifts towards international mission efforts?

To better support Jesus’ mission and to allow us to effectively and efficiently steward the resources that God has provided us, we encourage all donors to send in their gifts unrestricted so that we can apply them where they are needed most. We believe scripture clearly calls us to be on Jesus’ mission, whether here in the U.S. or in other countries.

As such, every donation is a contribution towards our efforts to carry out His mission, here in the US as well as India, Ethiopia, and around the world. Your support means more people are saved by Jesus Christ, more people are growing as disciples of Jesus, and more churches are being planted, no matter the location. If you’d still like information on sponsoring specific needs and projects, please contact giving@marshill.com.

In the wake of these changes, there is Still No Financial Transparency according to Throckmorton.  He concludes:

The church knows what they spent on missions but they won’t release the numbers. The memo posted yesterday indicated that the plan was to fund “highly visible” mission projects costing about $120,000 per year. Given what the church claims to have done, I estimate they may have spent a little more than that. However, why not tell the church and the “Global family” how much they spent and where they spent it? The leaders revised the FAQ page today, but again failed to include the figures which would address how they handled the donations. Why not be transparent?

Will those both inside and outside Mars Hill Church continue to give money to the revamped Global fund now called Mars Hill Go?  Surely there are more transparent missions organizations that will readily disclose their financial information and rightly so!

Dee Parsons Retweeted · Pope Francis
@Pontifex
This is the attitude of a true apostle: to go confidently forward, preferring the uncertainty of unexpected situations rather than force of habit. This courage is born from confident trust in God's greatness who loves to work through our lowliness. #ApostolicJourney
View on Twitter
667
0