"I am all about blessed subtraction. There is a pile of dead bodies behind the Mars Hill bus, and by God's grace it'll be a mountain by the time we're done…" 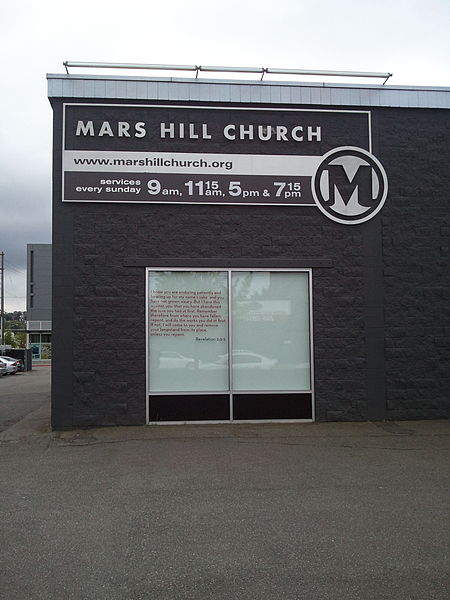 Updated to include the link to Wenatchee the Hatchet who found the infamous "penis home" comment in the first place.

Perhaps Mark Driscoll is a prophet 'profit' after all…  It certainly appears that he has foretold what would soon take place at the church he and a few others established eighteen years ago.  The pile of bodies under the Mars Hill bus is getting HUMONGOUS, and it includes not only congregants, but pastors!  Of course, Bent Meyer and Paul Petry were the first pastors to be thrown under the bus when the church by-laws were being radically changed.  Had Mark Driscoll and his cohorts listened to these wise men, perhaps Mars Hill would be a thriving house of worship today.  Instead, the shrinking multi-site megachurch continues to garner headlines.  Dee and I are having a hard time keeping up, but here are some important developments.

Church planting has always been a hallmark of Mars Hill Church.  No doubt you've heard the mantra 'church planting churches', which was oh so alluring to the Neo-Cal crowd.  Mars Hill has grown to fifteen campuses in five states.  However, last Sunday MH leaders announced the closing of three churches with another one teetering in that direction.  Those locations were named in a post on the Mars Hill website.

The congregation meeting at a former Methodist church in downtown Seattle (pictured here), 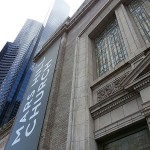 as well as the one in U-District, will begin worshipping at the Ballard Campus on October 12th.  The Phoenix church, which was recently planted, will hold its final church service on September 28, although MH leaders are exploring ways for the congregation to exist in a different form.  The Huntington Beach location may also be in jeopardy unless contributions increase.  Finally, the Los Angeles church plant has been scrapped, but the Spokane plant will continue to move forward, according to Pastor Dave Bruskas.

On the same day that Pastor Dave announced the church closings, The Seattle Times featured an article calling attention to pastor and staff layoffs.  Here is an excerpt:

After 18 years of explosive growth, officials at Seattle megachurch Mars Hill say financial pressures in the wake of recent negative media attention are forcing them to cut staff and eliminate some branches, including consolidating the downtown Seattle and University District congregations with the Ballard church, leaders announced Sunday.

The church, which had blossomed to 15 branches in five states and had followers around the world, also plans to cut 30 to 40 percent of its paid staff of about 100. That staff already had seen layoffs last spring and a string of departures in recent weeks by pastors angry or uneasy about the church’s direction.

No doubt if the current trend continues, even more paid staff will find themselves under the Mars Hill bus.

Eight of Nine Pastors Who Stood Up Are G-O-N-E!

A few weeks ago nine pastors spoke out via a letter which called for significant changes to Mars Hill's modus operandi.  We discussed this in a post entitled:  The Latest from Mark's Hill (aka Mars Hill Church).  As could have been predicted, eight of the nine pastors are no longer employed at Mars Hill.  Warren Throckmorton, the go-to person for the MH debacle, discussed this in a post published yesterday.  In his informative article, Throckmorton names the signatories and their current status.

One would think that given the dire situation in which Mars Hill Church currently finds itself, the top brass would be obliged to take a pay cut.  Think again…  It seems that someone in the know has indicated to Warren Throckmorton that the executive pastors' salaries are non-negotiable.  Here is an excerpt from another Throckmorton post:

One source (a current elder) tells me that executive elders’ salaries are not on the table for discussion. However, the 30-40 (unconfirmed reports tell me the number was higher) people laid off may not get severance pay and don’t have unemployment. The lack of comment from the executive elders about how they personally are going to help is louder than any amended statements could be.

Perhaps you are wondering whether this is the first time Mars Hill has experienced a financial crisis.  Well, just today Warren Throckmorton posted some extremely interesting information.  Here is a screen shot from today's post.  This financials in this chart indicate that Mars Hill was in dire straits two years ago. 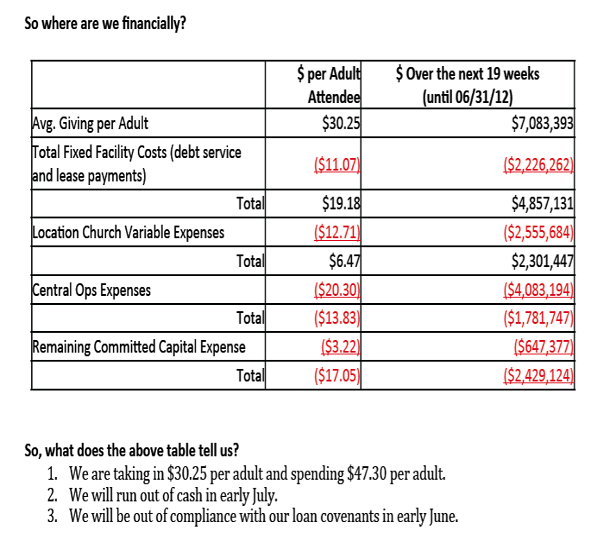 In light of this financial information, Throckmorton writes:

If Mars Hill Church is now in “the most serious budget challenge in our history” then things now must be much worse than anyone has stated publicly. Given the rapid acquisition of properties, Mars Hill could be very low on cash and be in danger of the same kind of problems that existed in 2012. My guess is October is a deadline of sorts along the lines of point #3 above.

My suspicion is that the past is prologue to the current situation. Turner predicted that the situation was unsustainable and it appears he was correct.

These must indeed be desperate times at Mars Hill Church…

Less Nickels and Noses to Count…

Now that the By-Laws have finally been revealed, Mars Hill Church members can see in black and white that they have no tangible influence at their church (i.e. no voting privileges).  See screen shot below.

According to an article featured last year in Charisma News …

Mark Driscoll's church has been ranked as one of the largest in the country.  Because more and more members are voting in the only way they can — with their feet and wallets — that claim to fame appears to be in jeopardy.  The precipitous decline in attendance may soon spell disaster for Mars Hill Church.

From this blogger's perspective, Mars Hill Church (perhaps more than any other) became world famous in large part because of the internet.  It was in the right place at the right time.  There was the church website, blogs, YouTube videos, online sermons, etc.  And let's not forget all the Neo-Cal leaders who elevated Mark Driscoll.  They know who they are.  So do we…

In recent years the tables have been turned on Mars Hill Church.  Ironically, the world wide web is now being used as a tool by those hurt by Driscoll's 'blessed subtraction'.  A recently launched website called Musings From Under the Bus is one such communication tool.  While Driscoll and gang warn Martians to steer clear of 'gossipy'  and 'slanderous' websites, there is a growing chorus of voices calling out MH leadership and revealing how they were run over by the Mars Hill bus.

A recent post by Rob Smith on the Musings website contains some enlightening information.  Here is an excerpt:

How can anyone be held accountable if they can simply rewrite the bylaws at will?

This is beyond a joke.

Here is how it happened.

The entire membership was betrayed in 2007 with a rogue change in the bylaws. The church that we joined, because it had a plurality of elders (i.e.: a safe church) and had given millions of dollars to and countless hours of effort toward, changed its bylaws in a coercive and despicable way.
The new bylaws became repeatedly changed despite church members being required to agree with them. As the bylaws changed, members were not notified and the bylaws become increasingly hard to find.
The current bylaws are now withheld from the elders of the church. So who is responsible, and who reports to whom? How is the church governed?

Mars Hill Church has members who are expected to agree with the bylaws, but the bylaws have become as secretive as the lucrative salaries being paid to the three Executive Elders. The last bylaws we did see (link) show that members are “members” in name only. Under the terms of the 2012 bylaws, the only “actual” legal members of the church were the elders. Church members were defined as “members only in a spiritual and theological sense,” but not actually members in a civil sense.

In classic Orwellian doublespeak, members are not actually members, except for the purpose of giving their dollars and time to the actual members (the elders) to spend as they choose.

It would appear that there are now new bylaws where the elders at Mars Hill Church are not actually elders from any Reformed point of view. They have no say in how the church is run and have no right to see the bylaws or to change them.

Because the bylaws are hidden from almost everyone now, this raises serious questions. Questions like the following:

– Who actually owns the property that the church keeps buying with the members’ (non) donations?

– How does the money get spent? What happened to the money that was raised for the Jesus Festival?

– While employees are getting laid off, are the Executive Elders still getting their full salaries?

– What are the cash reserves of the church?

– Who decides to buy new property?

None of these questions are likely to be answered under the present bylaws, because the Executive Elders are the only actual members of the church. Non-members, who think they are members, and non-elders who think they are elders, have no right to information like this.

And if all of that information was not damaging enough, Mark Driscoll has again come under scrutiny because of his misogynistic attitude.  Several days ago an article which first appeared over at Patheos and then on the TIME website condemns a concept that only Driscoll could manufacture.  It is 'penis homes'.  What in the world???  We refuse to include Driscoll's abhorrent words in this post, but if you are the least bit interested in what he had to say, you can access the TIME article here and the Patheos post here  UPDATE 9/11: and at Wenatchee the Hatchet's (the guy who found this) site here.

Since some of the Neo-Cal leaders have publicly proclaimed their care and concern for Mark Driscoll, let us pray for those who have been hurt by the Mars Hill leadership and thrown under the MH bus.

In all fairness to Mark Driscoll, we have decided to let him have the last word…