"The can't talk rule has this thinking behind it: 'The real problem cannot be exposed because then it would have to be dealt with and things would have to change; so it must be protected behind walls of silence (neglect) or by assault (legalistic attack).  If you speak about the problem out loud, you are the problem.  In some way you must be silenced or eliminated." 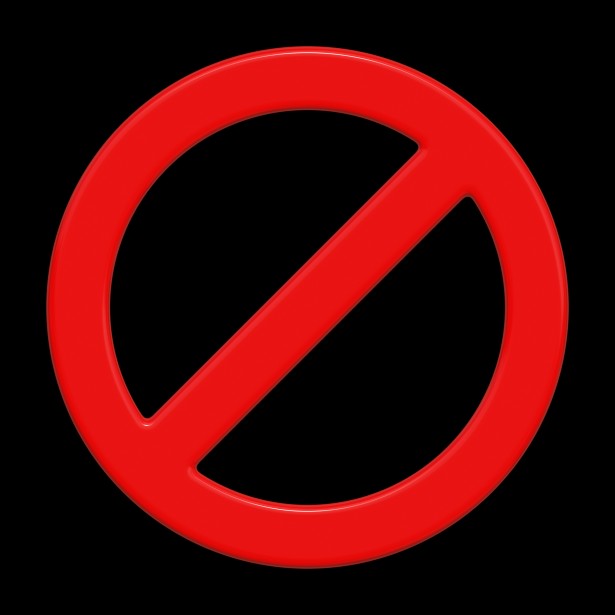 No doubt social media has revolutionized the way we communicate.  Gone are the days when the 'powers that be' controlled what was being said.  This appears to have played out earlier this week on both Facebook and Twitter.  In case you missed it, here is what happened…

A Mars Hill pastor named David Fairchild decided to use his Facebook account to address 'disputes between brothers'.  On July 6, 2014, Fairchild posted the following passage from the Bible on his FB timeline.

When one of you has a grievance against another, does he dare go to law before the unrighteous instead of the saints? 2 Or do you not know that the saints will judge the world? And if the world is to be judged by you, are you incompetent to try trivial cases? 3 Do you not know that we are to judge angels? How much more, then, matters pertaining to this life! 4 So if you have such cases, why do you lay them before those who have no standing in the church? 5 I say this to your shame. Can it be that there is no one among you wise enough to settle a dispute between the brothers, 6 but brother goes to law against brother, and that before unbelievers? 7 To have lawsuits at all with one another is already a defeat for you. Why not rather suffer wrong? Why not rather be defrauded? 8 But you yourselves wrong and defraud—even your own brothers!   1 Corinthians 6:1-8 (ESV) 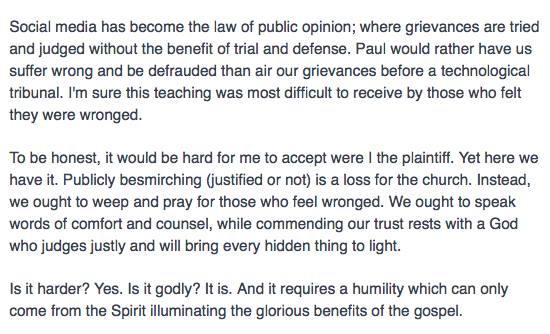 Screen Shot of David Fairchild's July 6, 2014 post on his timeline

So the Apostle Paul would rather have us 'suffer wrong and be defrauded than air our grievances before a technological tribunal'?  One has to wonder why this Mars Hill pastor isn't practicing what he is preaching.  Shouldn't he just remain silent?

It didn't take long for former Mars Hill member Rob Smith to weigh in about Fairchild's Facebook commentary.  On his blog Musings From Under the Bus, Smith wrote: 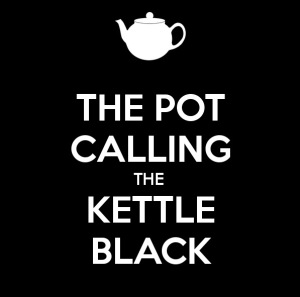 So now comes another Mars Hill pastor, David Fairchild, using social media (Facebook) to chide those who use social media to argue their case against Mars Hill Church.

I have met both these men. They are men that I like a lot. They are actually quite bright. Somehow they missed the big “E” on this eye chart. Clearly they do not believe what they are posting, or perhaps they are not as bright as I thought they were.

I enjoy both these men, not only for their contribution to my life, but because they have shown care for the things that I care about. David and I have traveled together more than once to Africa, and I love the passion that Anthony Bradley shows for the oppressed.

I know David well enough to know that he does not truly believe that posting public grievances on social media is equivalent to filing a civil lawsuit against a brother. If this were the case, then why did he post his grievance against bloggers on a social network, while he works in a public church that has been built largely through social media?

Furthermore, David suggests that the proper approach is that the bloggers follow Matthew 18. Well, you can count the number of bloggers on two hands. Each, including me, are easy to reach. If David has an issue with us, why is he not picking up the phone and beginning to work through Matthew 18 with us if he has a problem?

The truth, already well documented, is that the so-called “Board of Advisors and Accountability” (BOAA) has no interest in any communication with bloggers. Some of us became bloggers because following Matthew 18 is impossible (link).

A commenter wrote an excellent response to David Fairchild.  See screen shot below: 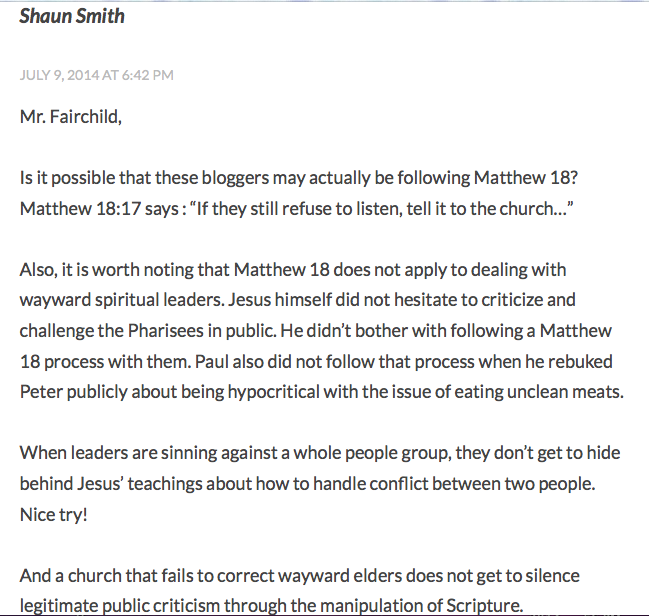 The conversation then moved to Twitterdom, with Shaun Nickerson asking David Fairchild in a Tweet whether he had a response to Rob Smith's July 8th post.  The exchange got pretty lively between Robert Fleming, David Fairchild, and our very own Dee Parsons. You can read the commentary here.  I am including my favorite part of the discussion in the screen shot below: 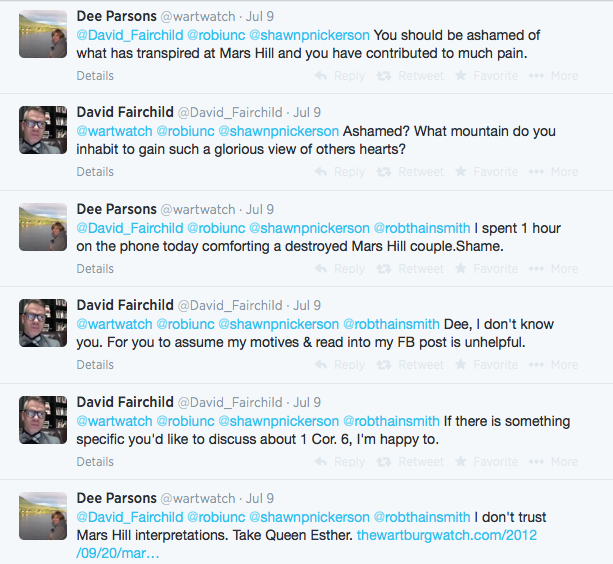 The commentary under Shaun Nickerson's Tweet came to a halt after Warren Throckmorton entered the fray (see screen shot below):

Yes, David Fairchild had one parting remark, then the Twitter conversation abruptly ended. Warren Throckmorton will likely never have his questions answered regarding the Global Fund numbers.

The next day Rob Smith wrote a follow-up post entitled MHC Pastors to hurting members – “quit social media and agree to be defrauded and abused.”  This excellent article ends with the following words:

I am saddened that pastors like David Fairchild and Brad House are willing to allow the abuse to go on and then tell the abused member to be defrauded and act in a way that pours coal on their own heads.

Their perspective is callous and abusive. It protects the abusers and not the sheep that these pastors are supposed to care for and protect.

These social media exchanges appear to demonstrate that the Mars Hill leadership is imposing the can't talk rule.  Was David Fairchild sent to do Mark Driscoll's bidding?  After all, Driscoll has kissed social media good-bye for now.  Wonder how long his hiatus will last…

We continue to find it both perplexing and amusing that a ministry which built its reputation in large part through the internet is trying to control the way that others are now using it.  We are grateful that more and more Martians and former Martians are coming forward and sharing their Mars Hill testimonies.  Please know that we are here for you should you wish to share your experiences in this forum.

The Mars Hill casualties also include some who have never even been members of Driscoll's church.  Over the last couple of years we have heard from a number of grandparents who have been completely cut off from their grandchildren simply because they do not endorse Mars Hill Church.  Why would any parent keep grandparents from seeing and enjoying their grandchildren?  How cruel!  This alone demonstrates to us that something is terribly wrong on Mark's Hill.

We leave you with a song that in some ways reminds us of Mars Hill.