"I regret I have to speak into this dispute which has escalated to a level that is unfortunate. What we are all struggling with is a tension in Jesus’ teaching. He associates with all “no strings attached” but that does not mean he affirms everything that person does “no strings attached.” He both associates and challenges…" 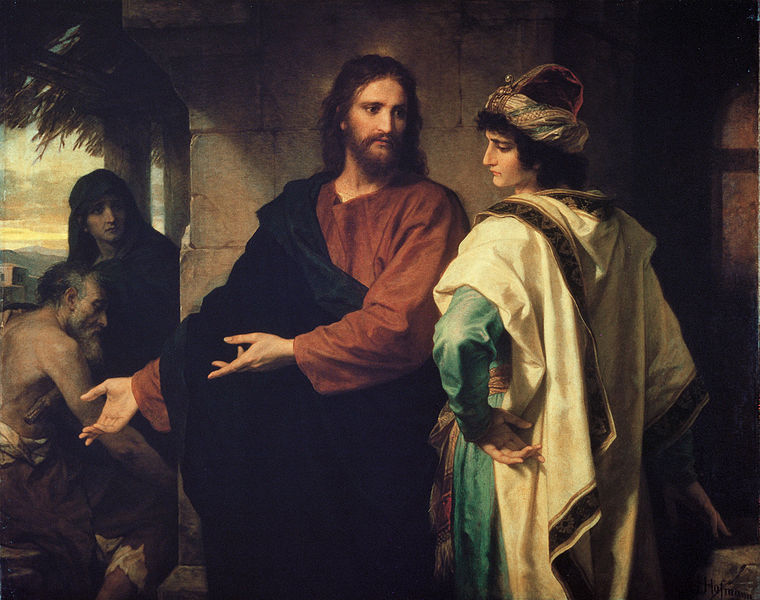 Over the last several weeks, there has been a contentious exchange between Joe Carter and Jonathan Merritt that has played out on the internet.  It appears to have begun with an article written by Carter, who blogs over at The Gospel Coalition.  The article's racy title – Since Jesus Ate With Sinners, Do I Have to East at a Strip Club's Buffet – drew quite a bit of attention.

The inspiration for this article appears to have been the controversial news reports about Christian wedding vendors, such as Christian bakers, being forced to accommodate same-sex couples.  Carter carries his argument to the extreme (please take the time to read it), and ends the post as follows:

Please stop arguing that Christians should be forced to violate their conscience unless you are willing to be consistent in its application. On this issue, what our culture accepts cannot be used as the standard. Fifty years ago, racism was tolerated while sexual sins were publicly denounced. Today, the situation is reversed. Many Christians (surprisingly, even some Anabaptists) are now willing to argue (or at least imply) that the state should be able to force Christians to serve at celebrations of sexual sin. Yet, these same people will likely balk at claiming that we should be forced to serve celebrations of racial sin.

If, like the Pharisees, you want to bind the conscience of all believers to a standard that is difficult, if not impossible, to support by Scripture, the least you can do is to argue for its broad application. Tell us that the white baker is not only obligated to serve a same-sex wedding but that the African-American baker is obligated to bake a cake for the Aryan Nation's national convention.

If you want us to follow your legalistic argument, then at least have the courage to follow it to all its logical implications.

In his rebuttal of Joe Carter's post, Jonathan Merritt published the following article (which we hope you will take the time to read):  Setting the record straight on Jesus, 'the a friend of sinners'.  Merritt states:

Many people know that the New Testament refers to Jesus as a “friend of sinners,” but what does that mean exactly? Apparently not what some Christians think it does.

In response to a twitter comment I made about Christian singer Natalie Grant walking out of The Grammys, Joe Carter, prominent Calvinist and director of communications for the Ethics and Religious Liberty Commission rhetorically asked, “Didn’t [Jesus] only welcome those seeking forgiveness?” He went on to agree with another that “The sinners Jesus partied with were already followers.”

Jonathan Merritt also calls attention to another article posted over at The Gospel Coalition written by Kevin DeYoung and entitled: “Jesus, Friend of Sinners: But How?”

He said that Christians needed to be “safeguarded against doctrinal and ethical error” regarding Jesus’ social habits.

The sirens returned. Was there really a conditionality in Jesus’ relationships? Carter’s and DeYoung’s assertions didn’t square with what I know about Jesus from the New Testament. Christ preached the Kingdom everywhere he went, but he also indiscriminately and unconditionally forged relationships with those at the margins of society, offering them a seat at the table. This scandalous social practice earned Jesus that nasty nickname to begin with.

The rhetoric became even more inflammatory when Carter argued from the absurd in this comment posted under Merritt's article:

Yeah, I think he did. But let’s see if people really agree that Jesus would hang around when people were “flaunting their sin” and not call them to repentance:

Do we really think Jesus would be cool with hanging out in these locations since he’s a “friend of sinners”?

As the comments became more contentious, a professor from Dallas Theological Seminary (who is mentioned in Jonathan Merritt's article) chimed in with these remarks:

I regret I have to speak into this dispute which has escalated to a level that is unfortunate. What we are all struggling with is a tension in Jesus’ teaching. He associates with all “no strings attached” but that does not mean he affirms everything that person does “no strings attached.” He both associates and challenges. I discussed both points with Jonathan. We discussed the woman at the well and the woman caught in adultery. In both Jesus engaged AND challenged. Jesus pointed out what he knew of the Samaritan woman’s life and Jesus told the woman caught in adultery to go and sin no more. The mistake is to cherry pick the combination. How that works out in specific scenarios is a call of conscience. The motive for action will make the rule. So some will bake cakes, others will refuse. I am reminded of Paul’s advice on eating meat offered to idols. Eat and do not ask where it comes from, but do not go to the temple and if someone says it was offered to an idol, do not eat. Not a one size fits all settings rule, but one calling for reflection and discernment. In these discussions nuance matters and we should be more gracious for how we sort it out, realizing a hard rule on either side may say too much and no rule may say too little.

In it he explains:

I also feel it is necessary to let people know that many of the claims about my views in the article are inaccurate.

The posts by DeYoung and I were written to address whether Jesus would attend any and every kind of gathering of sinners. Merritt misrepresented us by saying we think Christians should only talk to soon-to-be Christians.

Then Carter states his grave concerns as follows:

Merritt has followed this logic to (at least one) wrong conclusion. He supports the contention that Jesus would have "baked the cake" for a same-sex wedding ceremony and that Christians should therefore also be willing serve at a same-sex wedding.

But is it really true that "Christ offers fellowship to all indiscriminately without condition, no strings attached"? If so, then we must follow that claim to all its logical conclusions, for Christ, for Christians, and even for the unrepentant unbeliever.

Let's start with the implications for Jesus and his followers. If Jesus would fellowship "indiscriminately without condition, no strings attached" then it means he would fellowship with any group of sinners while they engaged in any type of sin (that is what "without condition" entails). That means not only that Jesus would act in such a manner (i.e., hanging out with any sinners while they are engaging in any type of sin), but that we should do so too.

As stated at the beginning of the post, this heated exchange appears to have stemmed from Joe Carter's objection that Christian wedding vendors must provide products and/or services to same-sex couples.  From my perspective, I believe that anyone who markets his/her services to the public should not discriminate.  How about the Christian banker, doctor, attorney, etc?  Can they legally turn away certain segments of the population?

On the other hand, I do not believe Jesus would have "baked a cake" for a same-sex wedding ceremony.  In my estimation, that is a totally separate matter and should not be confused with an individual who markets his/her product or service to the general public.  In those cases, the service provider must abide by the law of the land, and in so doing, I do not see it as an endorsement of any kind.  Perhaps demonstrating God's love to those with whom we do not see eye to eye will serve as a witness and make a lasting impression…

Looking forward to reading your opinions on the matter.