"There is so much that we cannot yet know about life in the new creation. We can be confident, though, that 'God must have some very profound eternal purpose for manhood and womanhood.' There is every reason to believe that gender-based distinction of roles will remain."

Relationships and Roles in the New Creation (CBMW) 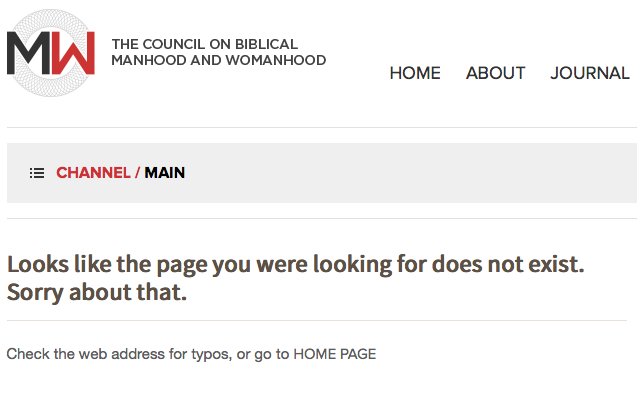 Yesterday Dee and I were discussing what we should write about today.  She mentioned a post over at Spiritual Sounding Board (SSB) that took to task a 'certain' CBMW article.  For those who are not familiar with CBMW, it stands for the Council on Biblical ™ Manhood and Womanhood.  Just the name should serve as a clue as to what was being discussed in said article.

Our friend Julie Anne Smith is the blogger who posts over at SSB.  The CBMW article she highlighted is entitled Relationships and Roles in the New Creation.  After reading it, Julie Anne posed this question in the title of her post:  Is the Council of Biblical Manhood and Womanhood Drinking Mormon-Flavored Koolaid?

As I understand it, Mormons believe the husband will retain a kingly role and the wife a queenly role in eternity.  This is reminiscent of the gender roles specified in the ESS doctrine.  ESS is the acronym for the "Eternal Subordination of the Son to the Father".  If you are not familiar with this controversial doctrine, you might want to consult the following article:  Is the Son Eternally Submissive to the Father?

I perused the CBMW article yesterday morning and was preparing to tackle the ESS doctrine in today's post; however, something very puzzling happened…

In the wake of Julie Anne's post and an onslaught of negative opinions being expressed toward the article in the Blogosphere and Twitterdom, it was suddenly driscollized © – a newfangled TWW term meaning 'scrubbed'.  Remember, you heard it here first. To see for yourself that the article vanished, go here.

We find it interesting that Al Mohler spoke at Brigham Young University on February 25. It may be relevant to note that the T4G (Together for the Gospel) conference is fast approaching, and registration closes on March 31.  We are left wondering whether this action was foreordained.  How can there be any other explanation from the Neo-Cals?

Frankly, it isn't hard to see why CBMW got so much pushback.  Here is how the driscollized © article concludes, as featured in the Spiritual Sounding Board post:

For those of you who are disappointed that the article got scrubbed before you had a chance to read it, take heart.  It first appeared in the Journal of Biblical Manhood and Womanhood (JBMW) back in the Spring of 2006 and can be read in its entirety at this link:

Relationships and Roles in the New Creation (pp. 4-19)

The re-publication of this article on the CBMW website eight years after it first appeared in the Journal of Biblical Manhood and Womanhood is a clear indication that this controversial doctrine continues to be embraced by the Neo-Cal crowd.  And it's no wonder because Owen Strachan, the Executive Director and Editor-in-Chief of CBMW, is the son-in-law of a vocal ESS proponent – Bruce Ware.   You may remember that in 2008 Bruce Ware and Wayne Grudem debated Tom McCall and Keith Yandell regarding the Trinity.  Here is the specific question that was addressed by each side:  “Do relations of authority and submission exist eternally among the Persons of the Godhead?”

Not surprisingly, the re-emergence and then sudden disappearance of ESS on the CBMW website has spawned its own satire, which begins as follows:

To our dear sisters in Christ,

Greetings to you in the name of our great God and Savior Jesus Christ, who has bought us with His blood, purchasing for Himself a people reflecting the richness of biblical manhood and womanhood.

It has come to our attention, dear sisters, that some of you have questions about what your place will be in the afterlife, when the Kingdom comes in all its fullness.  As you wait for the glorious appearing of our Savior, it’s only fitting that you may ask – “What will biblical womanhood look like in the New Jerusalem?  How may I best serve my God and my brothers in that wonderful place?”  It is right that such questions should come to us, your brothers who have given our very lives to serving God by explaining what your responsibilities are as women in the created order.  The duty to answer such questions and set your minds at ease is part of our responsibility – the great weight which comes from standing before God as biblical men.

For decades we have been teaching you the great gift of hierarchy with which God has ordered his creation.  We understand the inflammatory nature of the word “hierarchy”, but we will not insult your intelligence, dear sisters.  This word that we proclaim to you, rooted in scripture, is most plainly acknowledged to be a top-down authority in which we, your brothers, carry the heavy burden of headship.  And you, in your radiant femininity, have been given the light task of submission.  We do not wish to pussyfoot around the issue, using politically correct terminology when we speak of the very will of God.  This is why some of our brothers are urging a return to the use of the word Patriarchy to describe the system we promote.

But we digress.  Your question, put most simply, is this:  “Will I be called to womanly submission to my brothers in heaven, as I am on earth?”

One of our faithful colleagues has answered this question at great length, but to settle your concerns quickly, the answer is “Yes.”

And here is my favorite part of the satire:

Dear struggling sisters, we know that you are hurting.  We think, however, that it’s to your benefit that we be frank.  For 90% of you the problem is rebellion, a stubborn self will to “be like God.”  It is the same sin to which your ancestor Eve succumbed, setting this ghastly fallen world in motion.  Don’t you want us, your brothers, to protect you from repeating the mistake of your first mother?

“But it’s not rebellion!” someone will insist.  “I most earnestly want to please and obey God, and I feel His call in my life like a fire in my bones – and yet, I am denied because I am a woman.”  We are sympathetic, sisters, but we are also puzzled.  How could an unbiblical longing come from anyone but the Evil One?  And yet, we do not judge you, for we, too, are sinners and easily deceived (thought perhaps not so easily as Eve).  We believe God is good, and we offer you this hope:  after tens of thousands of years in the heavenly city, we trust that the “call” you have felt will wear off and be forgotten.  In the meantime, your painful obedience will rise up before the Lord like a fragrant offering.

Lest we be misunderstood, we assure you that we do not see you as inferior by virtue of your femininity.  We know that some of you are wiser than some of your brothers in the Lord; more knowledgeable about scripture; deeper in prayer; more gifted in public speaking.  But God’s ways are higher than our ways, and in His eternal purposes He is glorified by your submission to His will and to your brothers…

Next week Dee plans to take a look at another CBMW article entitled Pursuing Your Wife: Embracing a War-like Posture.  I wonder if this will be one of the topics to be discussed at the upcoming CBMW National Conference, which serves as a prequel to the Together for the Gospel Conference.  The theme of the CBMW conference is A Brave New Movement:  CBMW and the Gospel.   Now before any scrub-a-dub-dub / driscollizing occurs to this CBMW article, we want these 'brave men' at CBMW to know that we have already taken screen shots…

UPDATE (3/21/13):  On March 20, 2013, TWW sent a Tweet to Owen Strachan stating that the CBMW article that disappeared because of a purported 'glitch' had not yet been restored.  We just discovered today at 3:00 p.m. EST that the link to the article now works.  We are glad that CBMW has solved its technological issue.