Before I refuse to take your questions, I have an opening statement. Ronald Reagan link 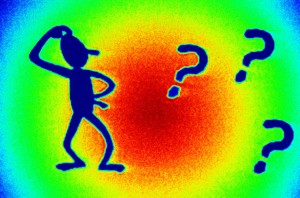 Some church do not like people who ask questions and crave answers.

A few years ago, SGM Survivors posted Wallace's Story in which the family of an abuse victim was allegedly told by leadership that they were

The American Jesus website posted a Mark Driscoll video and summarized it as follows:

So to recap: critics are lazy sinners who just complain all the time. Real Christians follow their leader and don’t ask questions.

TWW has posted story after story about Christians asking questions of church leadership and then being told  that they are "causing trouble." Some long time church members have even been escorted out of their church by police for asking thoughtful questions. In the post dealing with the epic fail of an Acts 29 church assumption at Countryside Christian Church here, a couple along with their handicapped son were summarily dismissed from the church for asking too many question,.

We could not know when that Police Officer escorted us out of our church home it would turn out that  morning was the worst and the best thing that ever happened to us, God brought us out of Egypt kicking and screaming with tears on our faces.

Let me show you how questions cause us to look deeper than our knee jerk assumptions. As most of our readers know, Dee is Side B when it comes to the issue of same sex attraction. For those of you who do not understand what that is, please read about it here. Recently, there has been a lot of press about a wedding cake baker who refused to bake a cake for a same sex wedding due to his beliefs that gay marriage is wrong.

Christians Jonathan Merritt here,  Kirsten Powers here and Andy Stanley (quoted in the Powers post) have been getting some heavy pushback for their views on the news story from folks like Denny Burk here because they believe that Martin Luther King Jr would disagree with the baker's conclusions.Here is a quote from Merritt's post.

It was into this context that King argued a public business owner cannot choose to serve certain customers and not others, regardless of religious convictions. He believed a public business must serve the entire public—period. It is not a far leap to see how King’s arguments coincide to our current situation. King’s logic can be boiled down to this: if a business is public, it must be totally public

I am going to be transparent with you. I went into this debate strongly favoring the rights of the baker to make this decision. However, I decided to carefully read all of the opinions on both sides. Suddenly, at about noon today, I had a lot more questions than answers. Let me be quick to add that I have not arrived at any conclusion. Here are a few of those questions. For the sake of the argument, assume you know these personal issues to be true.

Then I thought about the baker.

You get the picture. My initial knee jerk "It's his right to refuse" was being challenged. Again, I have NOT reached a conclusion. I do know this. Asking questions makes things a little less boiler plate, doesn't it?

As I read the Missio Alliance website, I was impressed with their willingness to consider the questions. The problem that I see with the Calvinista crowd is that they give us lots of answers and ask relatively few questions. In fact, as I explained in the Wednesday post, they have such good answers that they have built brick walls which John Piper wants to keep up.

Missio Alliance: The Focus of Their Work link

Now this is why I like this group. They ask questions and my guess is that they allow for some leeway in the answers unlike some of the hard nosed Calvinista groups. I am going to list a few of the questions here and encourage you all to visit their website to do some thinking. (Note the use of his/her pronouns.)

Missio Alliance and the role of women in the church.

Here is the question they ask link

What does it mean to say women are full participants in the ministry of the church alongside men? We seek to understand the New Testament elevation of women to full authority in the church.

In the previous post, we learned that Missio Alliance subscribes to the Cape Town Commitment which grew out of the Lausanne Movement. Here is a great link dealing with the empowerment of women and men.

Empowering Women and Men to Use Their Gifts Together in Advancing the Gospel
Occasional Paper No. 53 Produced by the Issue Group on this topic at the 2004 Forum hosted by the Lausanne Committee for World Evangelization  In Pattaya, Thailand, September 29 to October 5, 2004

“A New Vision, a New Heart and a Renewed Call”

This document recognizes that this is a contentious issue. However, this Alliance is dedicated to making a place for both sides in this debate. In other words, all are welcome unlike other coalitions.

In spite of the fact that history is heavily influenced by patriarchal cultures and has buried the stories of great women leaders, women emerge in leadership in every stage of the church’s history. New Testament house church leaders like Lydia and Phoebe reveal the important role women played. Paul greets 29 church leaders in Romans 16 — ten of whom are women, including Junia whom Origen himself honoured as a woman apostle. The twelfth century Hildegard of Bingen admonished her audiences to look to the Scriptures as their authority and to Christ, not the priests, for salvation. She was a woman before her time. And we haven’t even begun to mention strong women leaders in modern times like author and teacher, Elizabeth Elliot, (a complementarian), or pastor and college president, Dr. Roberta Hestenes (an egalitarian.)

I realize how emotional this issue has become for me as I teared up when reading the above statement. I believe that there is a place for all of us at the Missio Alliance table. We will not always agree with one another but we can break bread together instead of hiding behind Piper's brick walls.

Many of us have walked away from authoritarian churches, sometimes questioning our self worth and our faith. Finally, there is a group that is willing to talk it out. In fact, it is a place for "people like us."

We will be quoting from Missio Alliance material from this point forward.