God creates out of nothing. Wonderful you say. Yes, to be sure, but he does what is still more wonderful: he makes saints out of sinners
-Soren Kierkegaard 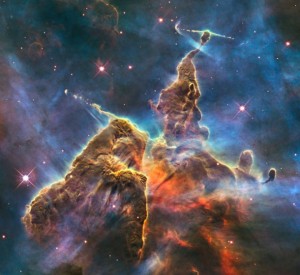 Today, Jim will discuss how light helps us to understand the age of the universe. We will finish up on this series on Friday and are grateful to Jim for providing us with his perspectives. We have a lot of stories to discuss in the coming weeks. We also plan to do a short series on Missio Alliance at some point in the near future, a group that will provide some hope to those who have not found an alternative to the current Neo-Calvinist/mega celebrity pastor state of the postevangelical world.

I would like to make something clear, once again. One can argue creationism strictly from the Bible. However, when one decides to argue science, the discussion must turn in the direction of evidence. There is no place for judging peoples' motives in either situation.  Today, in the Christian Post, Ken Ham said the following:

Ham urges his readers not to be taken in by "such elaborate ideas, which are nothing more than fallible sinful man's attempts not to take God at His Word!"

"How arrogant is finite man in thinking he can tell God what He got wrong. How sad so many Christian academics think they can put themselves above the infallible Word!" Ham concludes.

Creation Museum CEO and President Ken Ham has written a blog post, blasting a Christian academic for overlooking Biblical authority in an attempt to explain the long life spans of people mentioned in the Genesis 5 and 11 genealogies.

Ken Ham uses the words "arrogant, "fallible" and "sinful" to describe the efforts of man in this area. He even accuses Christian academics of putting themselves above God's Word. I find these comment despicable and self-serving. I have news for Ham. He cannot escape those labels himself. We are all sinful, including the man who "knows" precisely what the Bible says.

I will not allow further comments that utilize Ham's well-known tactics of labeling those who disagree with his premise as somehow Bible deficient. It stops now. There is a reason he got thrown out of homeschooling conference link. Remember, homeschoolers are his main constituency.

As you will see from Jim's comments, he goes out of his way to say something nice to those who disagree with him. I will add something to this. I do admire the YEC devotion to the Scriptures and I know they wish to be true to what they read. However, they must realize that so do lots of people, including myself, who come to a different conclusion.

Does science support a six day creation Part III: What does the universe ‘say’?

In exploring the claim by Tim Challies that “Science Confirms It” in reference to a young Earth (<10,000 years in age) and a six day creation, we have dealt with why Mr. Challies would make such a claim and his qualifications to make such a claim, coupled with a look at what science itself is. In this essay, I’d like to take a look at the plausibility that his opinion that:

“I find the science demanding millions or billions of years less compelling than the science supporting a much less ancient universe.”

is based on a real understanding of what the data and its implications actually are. I am in fact far more inclined to think that such a statement, if made in truth, reveals that Mr. Challies has taken a position either from ignorance or in spite of the true implications of the data and the science which would drive its interpretation, not because of it.

So what IS the data that implies drives a conclusion about the age of the Earth or the age of the Universe? That is massive question. There is not just one or even 10 or 100 datasets that drive that conclusion. It is, in fact, the implication of so many different areas of investigation it would take the remainder of this essay just to list some subset of the major drivers. And so all I can do is begin to point to what is out there and then perhaps make a few remarks about how those that claim to have a valid counter deal with this data.

As an amateur astronomer, many of my favorite indicators of the age of the Universe itself come from no less than the stars themselves. So I will deal in this essay with what derives from two of the most fundamental aspects of our universe: light and its physical size.

But then there is the physical size of the Universe. The velocity of light indeed very fast, but it is finite. And the universe itself is immense. So immense in fact that it makes the fantastic speed of light (a spacecraft moving at that speed would orbit the Earth 7 times per second) seem slower than the progress of a snail on the way to Paris, France from Sydney, Australia. Indeed, the time it takes light to cross the distance to even the very closest stars is measured in years. Hence the astronomical distance measure: the light-year.

And for light to reach us from the Milky Way – the white band that stretches across the summer sky and visible when one leaves the city lights behind – requires more time than all of recorded human history. In fact, it requires roughly twice the amount of time that YEC will allow for the whole of the universe to exist. And yet that band of stars is relatively close on the cosmic scale. It is the light from the central stars of our galaxy – a structure that requires almost 100,000 years for light to cross.

And in the universe, there are billions of similar structures, billions of galaxies. Indeed, orbiting our galaxy are a few smaller satellite galaxies that lie around 150,000 light years away. And the very closest major galaxy not gravitationally bound to our own, Andromeda, lies 2.5 MILLION light years away. That is, for light to cross the distance between us takes 2.5 million years to arrive here on this planet for us to observe. And to top it all off, the most distant galaxies are more than 1,000 times farther away than that. In fact, fully 4,000 times as far away – over 10 BILLION light years away!

So I ask this simple question:

If light takes millions and billions of years to cross the distance between objects we can see at night, some with the naked eye (Andromeda), then what is the most obvious, compelling conclusion about how long this universe has been in existence? What does this data imply?

As I said in the earlier essays, science makes observations and then proposes hypothesis to explain the data that is derived from those data. What hypothesis should a scientist propose based on the observations of the distances involved and the known speed of light? And then, how could he test that hypothesis?

Would it help if I mentioned that not only have these implications been tested and challenged over and over again, but so have the underlying implication that light’s velocity must remain constant. In fact, one of the most direct ways to validate the speed of light in the past is simply to watch light propagate from a bright event in the distant universe and measure its speed. And this has in fact been done several times. And in each case, the speed of light there and then is the same as it is here and now. Implying that for us to be observing those events, the amount of time that has passed to allow us to see the event is in fact equal to the number of light years which separate us from the same events.

The most famous example of the kind of observation is the light echo of a super nova that exploded in 1987 in the Magellenic Cloud. We have been watching light move out from that event (at a distance from us of 168,000 light years) for the past 27 years. It’s moving at the speed of light. That means it took 168,000 years to get here, and we are looking at an event in the universe 168,000 years ago. And that is a relatively NEARBY event.

And this just barely scratches the surface. We can observe not just the distances and the implications of the speed of light, but in virtually every corner of the universe we can observe records of processes taking millions of years to complete or form – from tidal tails created by the passing of two galaxies to the expanding gasses of a supernova remnant, or the dying remains of stars with multi-billion year lifetimes. Everywhere are signs and records that point directly to a very, very old universe. Literally trillions of distinct examples consistent with and directly implying a universe whose age and history spans some 13.7 billion years.

How then does Mr. Challies say that the evidence the universe is only a few thousand years old is compelling? What compelling evidence for a universe <10,000 years old comes out of a universe where every major galaxy observed requires spans of time hundreds or thousands of  times the allowable YEC figure just to be seen? The real question is: Is there in fact anything we can observe that would lead us directly to with immediacy conclude the universe should be in fact <10,000 years old? And if one could cite such a bit of evidence, how would one reconcile it with the literally hundreds of billions of galaxies that require millions or billions of years of time just to be seen? What possible thought process would logically derive an age for the universe of <10,000 years from that massive set of observations I have described?

The reality is certain YEC scientists have attempted to address these issues and I freely and gladly acknowledge that these are in fact very intelligent and well educated men.( Ed. note: YEC reread that last sentence.) They have constructed elaborate conjectures, speculations driven not by the data but rather what they have already concluded MUST be the case. And in fact, when all is said and done, these speculations fail to explain a whole host of relatively nearby phenomena.

To pick one, the white dwarf which orbits the brightest star in the Earth’s night sky – Sirius. And they know their speculations fail (as science). When queried about this very star, the scientist whose hypothesis has perhaps the most respected in YEC circles for helping provide some kind of stop gap to the implications of the data I have just described simply invokes the right of the Creator to randomly violate His own creative process ‘for variety.’His name is Russell Humphries and he outlines his ideas in 'Starlight and Time" link.

To note that God is not bound by any particular process is in fact fundamental to Christian belief and faith. But it is absolutely contrary to the statement “Science confirms it”. For science to confirm a young Earth, a young Earth (or in this case, a young Universe) must be the logical natural, derived conclusion from the data itself according to the methodology of science. And as has been shown, that simply is NOT the case.

And so, rather clearly, at least as regards a young Universe, the science does NOT confirm it. It, in fact, counters it with almost every observation.