If you're playing a poker game and you look around the table and and can't tell who the sucker is, it's you. Paul Newman link 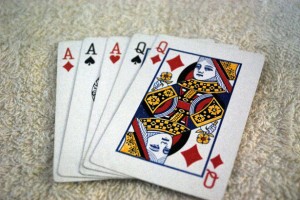 In an effort to keep you informed on a number of stories, we will be posting brief updates on developments surrounding these events. (There is a lot going on!) This post involves a peripheral account in the James MacDonald debt controversy.Thank you to our readers who keep us posted on these events. You guys are great!

Our main post today will be a truly fascinating analysis Elevation baptisms.

In the past couple of days, TWW has received several comments about the article we did on the gambling behavior of Jerry Jenkins here. I wondered what was up. Obviously, there was trouble brewing and I surmised we would be hearing about it soon.The commenters asked why I believed gambling is a sin. They missed my point.

Here is my response to one of those comments.

Since I am somewhat familiar with compulsive behavior, I raised the possibility if these two items: the debt and the gambling, might be linked. Jenkins, bless his heart, has confirmed that he has been to Vegas with MacDonald and that they gambled or, to appease you, played games of skill.

This issue has nothing to do with sin and is merely raised as a question of potential compulsive behavior. I only raised Jenkins name since it corroborated the concern of MacDonald’s gambling.

I do not think drinking alcohol is a sin unless one is routinely getting drunk. However, if someone is drinking in excess amounts so that people raise questions then one should consider the possibility of alcoholism or pre-alcoholic behavior.

If I were to write a post in which a pastor was having some monetary issues and was also seen to be drinking to excess routinely, I might raise the question of an issue that needs to be considered. To keep harping on the question if drinking alcohol is a sin would not be addressing the point.

Little did I know that, several days ago, Jerry Jenkins apologized for his gambling, stating that he will no longer visit casinos. Again, my interest in this question has to do with Jenkins' close relationship with MacDonald and the fact that the two of them have been seen gambling together.

We thank our good friends at The Elephant Debt for allowing us to reprint from their website. TWW admires the work they do to analyze the issues of a church that continues to mean so much to them. This letter appeared in the comments under this post.

Forgive me for reading to you today, but I tend to grow emotional when I talk about Moody, and I want to be sure to include everything I want to say.

I have been part of the Moody family for more than 40 years and have often said that serving Christ here has been the proudest association of my life. I began as a student right out of high school, then returned and became editor of Moody Magazine 39 years ago this week. I eventually retired as Vice President for Publishing. I have been privileged to serve as a member of the Board of Trustees for 13 years, the past five as chairman.

I am here today to ask your forgiveness. A few years ago I began playing poker in my home with friends and family. On occasion I played the same game in casinos. I never played alone, and while my pastor and my accountability partners were aware of it, I have come to see that playing publicly was an error in judgment in a matter of Christian liberty.

Not wanting to make an issue of this for those whose consciences might have differed from mine on it, I did not make it public or, as the Apostle Paul cautions, “flaunt [my] liberty.’”

However, seeing how it’s having been made public has wounded some in the Moody family, I want you to know that I will never patronize a casino again.

This is a commitment I make willingly, surrendering what I considered a personal freedom for the sake of serving Christ with you, my Moody family.

There are few worse feelings than knowing you have disappointed people you care about. Please forgive me for offending you and for my failure to give the reputation of Moody the priority it deserves.

While, as [board vice chairman] Berv Peterson has said, until now the board has not been required to adhere to the Employee Standards, as a former employee who followed those standards for many years, I should have recognized that you would assume we were all on the same page in these matters. I’m sorry for disappointing you that way.

As President Nyquist has led us into a new season of liberty with the revised Employee Standards, I pray that the impact of my failure to keep the reputation of Moody ahead of my personal freedom will serve as an example to us all in our lifestyle choices—where the highest good is not our freedom but rather the impact our actions have upon those we seek to reach and serve.

Now let me speak to a comment from the recent article which brought all this to light. In a poor attempt to dissuade the reporter from a presumptive question about my having played for “high stakes,” I made a callous and insensitive remark [the “pocket change” comment] that does not represent my heart, and I ask your forgiveness for that as well.

For the many years I worked at Moody, Dianna and I raised our family more than 50 miles from here, because that was where we could afford to live. I understand the sacrifices you make to work here, the second jobs and the tough choices it takes to make ends meet. In Psalm 62:10 we are instructed that “if riches increase, do not set your heart upon them.”

When the Left Behind series changed our financial picture, Dianna and I did not set our hearts on riches but were overjoyed to be able to give to Moody in a way we never dreamed possible. I deeply regret that my careless comment appeared so disrespectful to the God-honoring sacrifices you make every day to serve this great ministry. Please forgive my thoughtless words.

I ask for your grace and mercy and prayer as I and the other members of the board of trustees pledge to live by the same biblical standards you live by. My prayer is that even greater unity and commitment to the kingdom will be the outcome of my painful lesson. Thank you for letting me speak to you from my heart today."