"Toxic faith is a destructive and dangerous involvement in a religion that allows the religion, not a relationship with God, to control a person's life." 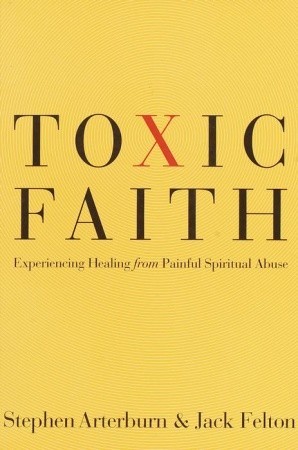 There have been a growing number of books regarding spiritual abuse that we highly recommend, and Toxic Faith is one of them.  I read this book back in the summer of 2010 and reviewed it here at TWW.  Because our readership has grown since that time, we thought it might be helpful to draw attention to those books that challenge the status quo.   What follows is my overview of this incredibly helpful book.

"Most of us began our journey into faith with trusting hearts.  Yet incidents of abuse, media accounts of perverted religion, personal disappointment, loss, betrayal, and even unrealistic expectations of God can cause us to develop a warped or damaged view of faith.  Too often, what began as an authentic relationship with God deteriorates into a defective faith with an incomplete or poisoned view of God — one that allows the religion, not the relationship with God, to control our life."

In the Preface, Arterburn describes how Victor Oliver, his publisher with Thomas Nelson called him in 1989 with a book idea – "to create a book to help men and women stuck in sick churches, to throw out a lifeline to hurting believers who had been used and abused and robbed of their relationship with God."

Arterburn explains that Victor "knew that many religious folks are good people doing some very good and right things but all for the wrong reasons — resulting in a paradoxical separation from God rather than intimacy with God."

Jack Felton came up with this brilliant book title and supplied the information that Arberburn lacked.  When Toxic Faith, was published in 1991, it surged to the top of the bestseller list.  Publisher's Weekly dubbed it a future "Christian Classic", and history has shown that they were correct.

Arterburn explains that the public response to Toxic Faith was a flood of letters from those who had been spiritually wounded by leaders, husbands, family members, and pastors who misused Scripture to gain control over their lives.  Hundreds of readers have conveyed to them that the book literally saved their lives!  In the preface, Arterburn writes:

"For the first time, these individuals realized that God loved them, no matter how someone in power had misrepresented God or used the Lord's name to control and manipulate the church on the basis of the toxic behavior of people who did not really know God and were not close to what God wanted the church to be."

Toxic Faith was re-released in 2001 and continues to be in high demand.  It has earned mostly five stars ratings from reviewers at Amazon, with no reviews being less than four stars.  All of the Amazon book reviews are worth reading, and this one written by "Lisa" is especially insightful.

"Every Christian needs to read this book. The last church I attended was toxic but when I was in it I didn't fully realize it. I kept making excuses for the pastor's behavior (and the church leadership's behavior). Leaving that church was like coming out of a fog. Reading Toxic Faith was like reading a play that the church had been acting out. The book explains that in a toxic faith system, there are various roles that each person plays: a persecutor, co-conspirator, enabler, victim and an outcast. In order to keep this system going each person remains in their roles (as in an emotionally unhealthy family). But toxic faith doesn't just begin in a church. Toxic faith begins in our personal lives (usually from childhood) in some way and transfers into our faith system. The book tells the characteristics of a toxic church vs a healthy church. It talks about religious addiction vs a relationship with God. It took a minute for me to get into the book because right away I was hoping to hear about the bad church system I'd just left, but first the book talked about how toxic faith begins (with us). This book isn't filled with a lot of Bible Scripture, but it's filled with knowledge from two guys extremely gifted by God in their insight and keen discernment. The book helped further my healing after leaving a toxic faith system. Just because a church is big, popular, located all over the world, teaches the Bible extremely well (this is was what fooled me with my church), and started out with good intentions in its early days doesn't mean it's immune to toxicity! I highly recommend this book."

Toxic Faith is filled with such powerful information that it is difficult to narrow down what is most important to share with our readers; however, I'll do my best.  In the book's introduction, Arterburn explains that one of the most painful experiences his godly grandmother ever endured was an IRS audit!  The agents couldn't believe that someone reporting a meager eight thousand dollars a year on her income tax return would give 35 and sometimes even 40 percent of that income to the church and other ministries.  But the IRS auditors came to discover that it was indeed true.

"There was nothing toxic about Nany's faith.  She never gave to a particular minister, but always to the ministry, such as to a children's home or to a project to feed the homeless.  When she gave a dollar, she knew how that minister was going to spend it.  At least she thought she did. (emphasis mine)"  (p. 2)

Unfortunately, his grandmother discovered prior to her death in 1989 that the toxic faith of the so-called ministers to whom she gave robbed her of the blessing of knowing that her sacrificial giving had been used to advance the kingdom of God.

I found the following statements by Arterburn to be especially heart wrenching:

"They took her money and spent it on themselves and their big plans, schemes that had nothing to do with my grandmother's desire to tell the world about God's love or to feed and clothe orphans.  Some of those ministers that she so faithfully supported wound up in jail, divorced their wives, were arrested for indecent exposure, or fell into other public sin." (p. 2)

"They built big empires for themselves while my grandmother turned off her heater at night so she might be able to save a few dollars and therefore give more.  Their faith was toxic.   It poisoned many who trusted them, and it distorted the view of God held by many who watched as these media ministers fell from grace.  As a result, many today believe all ministers are charlatans and out to fleece the flock." (p. 3)

I don't know about you, but that was difficult for me to read!  Arterburn and Felton end the Introduction with the following quote:

"If I were asked for a yardstick to discern good from bad spirituality, I would suggest three criteria to be detached from:  material gain, self-importance and the urge to dominate others.  Unfortunately, much of what is labeled spirituality in America today moves in the opposite direction.  It means using the names of God and Christ to promote one's own importance, material gain, and right to oppress others."

Arterburn and Felton end the introduction with these important verses from God's Holy Word:

"Beware lest anyone cheat you through philosophy and empty deceit, according to the traditions of men, according to the basic principles of the world, and not according to Christ… Let no one defraud you of your reward… [W]hy, as though living in the world, do you subject yourselves to regulations — "Do not touch, do not taste, do not handle," which all concern things which perish with the using — according to the commandments and doctrines of men?  These things indeed have an appearance of wisdom in self-imposed religion, false humility, and neglect of the body, but are of no value against the indulgence of the flesh…  Set your mind on things above, not on things on the earth."

What Are Toxic Faith and Religious Addiction?

Here is how the authors define toxic faith:

"Toxic faith is a destructive and dangerous involvement in a religion that allows the religion, not a relationship with God, to control a person's life.  People broken by various experiences, people from dysfunctional families, people with unrealistic expectations, and people out for their own gain or comfort seem especially prone to it.  It is a defective faith with an incomplete or tainted view of God.  It is abusive and manipulative and can become addictive.  It becomes so central to a person's life that family and friends become insignificant compared with the need to uphold false beliefs."  (p. 19)

This is a frightening reality!  Remember Lisa's testimony in her Amazon book review?  She explained:  "Toxic faith begins in our personal lives (usually from childhood) in some way and transfers into our faith system."  Until those who are victims of toxic faith understand this important concept and the part they play in the charade, there can be no healing.   They must learn to discern and spot wolves in sheep's clothing!

The authors continue with these sobering statements:

"Toxic faith is also a counterfeit for the spiritual growth that can occur through a genuine relationship with God.  The toxic faithful find a replacement for God.  How they look becomes more important than who God is.  Acts of religion replace steps of growth.  A facade is substituted for a heart longing to know God.  The facade forms a barrier between the believer and God, leaving the believer to survive with only a destructive addiction to religion."  (p. 20)

Hopefully, you now have a better understanding of Toxic Faith, which we highly recommend.