The strongest bulwark of authority is uniformity; the least divergence from it is the greatest crime Emma Goldman link 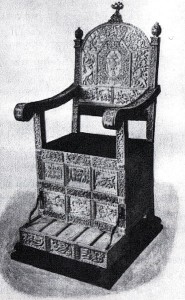 TWW believes that the evangelical church in America is on a downward spiral, if statistics can be believed. The Internet Monk says the church is existing in the "post-evangelical wilderness." We laid out our case for a declining church in Church Planting: Is It About the Gospel or Acquisitions? Link This post focused on three points:

Over the next week, we will discuss whether the church has focused on the wrong priorities. These include, but are not limited to:

One of our alert readers, Janey, picked up on a post at The Gospel Coalition here which originally appeared at 9 Marks here called Wendell Berry and the Beauty of Membership written by Matt McCullough. TWW believes that the hierarchical culture at 9 Marks is dedicated to an authoritarian role for the leadership which emphasizes a disciplinary posture towards the church membership. That is why we were somewhat startled by the use of Wendell Berry as the poster boy for encouraging church membership; especially church membership as defined by many of those who employ the strict culture found in many 9 Marks churches. In fact, we think that Berry might find this co-option of his thinking somewhat amusing, if not downright misrepresentative.

In an interesting post, Wendell Berry and the Church link written by Rob Dreher at The American Conservative we read:

I just finished a good essay from the writer D.G. Hart, who reflects on the by now familiar claim that contemporary Christianity should study Berry and learn from him. Hart agrees, but contends that Berry has been too quick to dismiss the institutional Church.

Note that Hart claims that Berry is no great supporter of the institutional church. Why is that?

Hart — who is a historian and a Reformed Christian — calls Berry’s critique of American Evangelicalism astute, because it focuses on how the Evangelical style is so amenable to a culture of rootlessness and a disembodied spirituality. Hart quotes from a Berry passage about economic exploiters (versus nurturers), from Berry’s The Unsettling of America:

Let's look at this again. Berry looks s economic exploiters versus economic nurturers. As a side note: Berry in a conscientious environmentalist and , as a farmer, supports an agrarian society and bemoans the urban culture.

There is no question that Berry emphasizes the value of community to combat an entrenched individualism, combined with rootlessness, that is inherent in industrialized societies. This does not mean that he supports the development of another rigid entity that some call the evangelical industrial complex. I could be mistaken but I believe that Berry would look in horror at today's megachurches, complete with satellite beam in of a charismatic pastor and people sitting in auditoriums, watching a great performance up front.

My guess is that Berry would shake the dust off his feet if confronted by a member of some pastoral team who would tell him that he should be coming to meetings instead of tending his farm, along with caring for, and enjoying, his neighbors. Berry had a view of a community in which neighbors helped one another through hard times and rejoiced together in good times. Somehow, I do not think Berry would appreciate a neighborhood leader, marching around, pointing out the pride and arrogance of the lowly townspeople.

Here are a few points from the 9 Marks/TGC post. We especially thank Janey for drawing our attention to them.

9 Marks and the author believe in the formalization of membership.

In other words, even if you attend, give money and volunteer, you are not "really" a member. In fact, you may be a bad Christian by not "signing on the line" just like they did in Acts…or did they?  I cannot seem to find a reference but I am sure it must be in there somewhere because 9 Marks assures us that they "go by the Book."

Here are the reasons you are not following the Gospel if you do not officially join a local church.

You will not deny self.

This means if you serve the poor, help your neighbor, attend a church, give money for ministry, etc. you do not cut it because you are self centered. You officially become other centered as soon as you sign on the line.

You will not experience "liberating submission."

You forgo liberating submission which can only be found in serving your neighbors, which in 9 Marks lingo means that you have signed a piece of paper that you are a member. Now remember, this "liberating" submission means, in some 9 Marks churches, that you are not allowed to resign your membership until you join another church or the pastors "let you go." In Wendell Berry's world, one can always sell the farm but in the church world, you can't leave.This is liberating?

You have selfish ambition and an exalted self image which prevents you from joining the church.

You exhibit selfish ambition and create an exalted self image that drives you:

In other words, if God has called you to work with children with special needs, and "the church" does not have such a ministry, you need to subordinate that selfish ambition to the betterment or a particular local church. As for "building a name" for themselves, there are a few pastors who might fit that description but, since they are pastors, they get a pass. Selfish ambition is alive and well in those who have "signed the document." Ditto on the exalted self image. Church membership does not deal with that issue.

However, the following statement really jumped out at me.

Too often we try on new churches like we try on new clothes and for much the same reason. We’re looking for style and fit, for what meets our needs and makes the appropriate statement about who we are. We put our churches in service of our desire to be somebody and our commitment doesn’t outlast the better options of Elsewhere. But this posture—beside its offense to the cross—leads to self-absorption, restlessness, and isolation.

An offense to the cross…really? I have been writing this blog for 4 1/2 years. I have heard story after story of abusive church practices. We had a particularly moving post written by a former member of a 9 Marks church who was not allowed to resign from his church. This author talks about members who are trying to find churches that "fit" them. Could it be that some of them are trying to find churches that love and treat their members with respect?

Also, aren't there churches which style themselves to fit a particular viewpoint of the pastors? How many pastors come to a church and tell their members that they are wrong and sinful in how they do church and that they need to change? So the pastors get to change the "style and fit" of a church and it is good because they got an MDiv? If these guys change the style of the church, they are changing it simply to the glory of God? For the member looking for a particular type of church that suits their view of the church, it is selfish ambition?

It is this pastorcentric/authoritarian view of the church that we will be challenging in the days to come.