"Those heart-hammering nightmares that start to lose coherence even as you're waking up from them, but that still manage to leave their moldering fingerprints all across your day.” ― Mike Carey, The Naming of the Beasts link 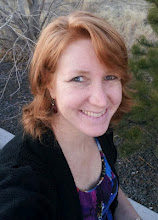 It is incumbent on all of us to understand family dynamics as we navigate these dark waters and to be sensitive to all involved. That is what Deb and I tried to accomplish today, with varying degrees of success. As always our hearts go out to those who have been wounded by horrendous abuse.

Due to the emotional toll of the day, we are changing our planned post dealing with TGC's latest missive on a gospel approach to sexual abuse and turn, instead, to a book that Julie Anne Smith covered on her wonderful blog, Spiritual Sounding Board. As an aside, she just wrote a great post dealing with Mark Dever and CJ Mahaney here.

However, the post we are focusing on today received 495 comments and she has given me carte blanche to rip off her post. She and I tweeted about this post over a few days and we spoke today. Well, actually I called her and said I was quitting blogging and becoming a lady of leisure. Deb remarked we could be doing brunch instead! Never fear, we realized if we lunched and brunched, we would become fat and that would interfere with our adorableness. We have recovered our good senses and are back now. Thank you Julie Anne!

In 2005, the following book, Help! Mom! There Are Liberals Under the Bed! was published. 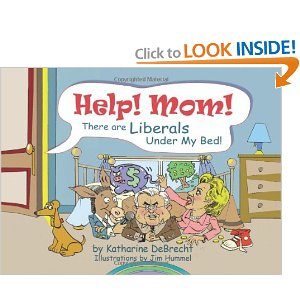 Here is the description from Amazon link.

This full-color illustrated book is a fun way for parents to teach young children the valuable lessons of conservatism. Written in simple text, readers can follow along with Tommy and Lou as they open a lemonade stand to earn money for a swing set. But when liberals start demanding that Tommy and Lou pay half their money in taxes, take down their picture of Jesus, and serve broccoli with every glass of lemonade, the young brothers experience the downside to living in Liberaland.

Well, this is America and we all know that conservative political values and Christianity are both Biblical, arent they? Well, apparently JD Hall, thinks so and he appears to have adopted the general theme of scary liberals hiding under the bed for his book, Help Mom! There are Arminians Under My Bed. Are there spooky Arminian monsters lurking under the bed, ready to destroy the souls of totally depraved boys and girls. 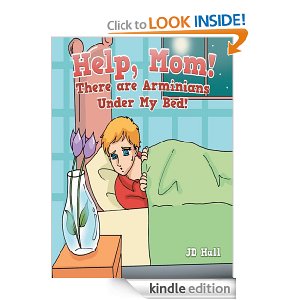 Come along on a journey with Mitchell, as he recalls his nightmare for his mother. Mitchell was in a land of darkness and gloom, when due to no cooperation of his own, a Knight in shining armor saved him and all the other captives He intended to save. “Help, Mom!”is a children’s allegory designed to teach your kids the Doctrines of Grace through the use of creative story-telling.

However, it appears that the book was republished under a different name, Help! Arminians are Giving Me Nightmares Again! several months later. 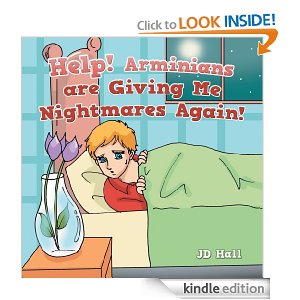 
I wonder, did the publisher of Help Mom, There Are Liberals Under the Bed not take kindly to the "similarities" of JD Hall's book? Here is the description at Amazon. Sounds the same as the previous book.

Come along on a journey with Mitchell, as he recalls his nightmare for his mother. Mitchell was in a land of darkness and gloom, when due to no cooperation of his own, a Knight in shining armor saved him and all the other captives He intended to save. "Help! Arminians are Giving Me Nightmares Again!" is a children’s allegory designed to teach your kids the Doctrines of Grace through the use of creative story-telling.

So who is JD Hall, the author? According to Amazon:

Hall is the pastor of Fellowship Church in Eastern Montana, where he lives with his wife, Mandy, and three children. JD is a co-founder of Reformation Montana, a network and mission society consisting of Reformed Baptist churches in Montana and the surrounding region. He is a columnist for the Intermountain Christian News, and operates the Pulpit and Pen website. JD received his B.A. in Christian Education from Williams Baptist College and M.A. in History from Arkansas State University.

Unfortunately, as of 7 PM today, his blog, Pulpit and Pen, link is not accessible as it was the other day. Perhaps there is a ground swell of interest in "Ordo Salutis" that has crashed the site? Thoughtful, fun-loving children's theology can be somewhat difficult to obtain. However, be not dismayed. His Twitter account link is up and active. Julie Anne (aka Jezebel) Smith and he had quite an exchange. Due to the sensitive nature surrounding the book, you might think he would be concerned to show thoughtfulness and nuance in his approach to this matter link. Here are some of his tweets.

1. No, I do not believe teaching “the essentials” are enough. Primarily, because we are told to teach “the whole counsel of God’s Word” and because “all of the Scripture is good for reproof, correction, formation of sound doctrine,” etc.. Secondarily, because the only way we can determine what “the essentials” are is by our own standards of priority. Who’s the person that decides that? Who decides what is an essential? Third, the Doctrines of Grace deal directly with the topic of salvation (what it is, how it works, how it’s given etc) which I feel to be pretty darn essential.

2. No, correctly understanding salvation is not a requirement FOR salvation. However (speaking for myself and my own development as a believer), understanding the grace-aspect of salvation GREATLY benefits my understanding of God’s glory and elevates my worship to understand the vast depths and heights of his saving grace. Also, it IS necessary for Biblical ecclesiology, missiology, etc. It plays into so much of how we Christians conduct ourselves both in our own lives and within the church.

3. It doesn’t concern me (as in, “keep me up at night”) that people would take issue with the cover, assuming they would read the contents. Ironically, most complaints about the cover include some insult toward me not being open-minded, which I find less than sincere if they didn’t read the content. The cover is meant as a novelty – something we can laugh about. If we can’t laugh about things, we’re pretty messed up people.

4. Concerning big words, I’ve often used this example: If you went to the doctor and he diagnosed you with “Pneumonoultramicroscopicsilicovolcanoconiosis” (which is an actual medical disorder, I didn’t make that up) you would not only soak in everything the doctor had to say about it, but ask for a brochure and literature that you could go home and read. You would search on WebMD and Google it and learn everything there is to know about it. You would talk about it to all your friends. You wouldn’t say, “I just can’t figure out these big words.” You can learn about what’s important to you. That’s #1 – we are a smart, literate people. Words like “Ordo Salutis” and “Monergism” aren’t complicated. We can handle them. And to anyone that says kids can’t handle these words, I can introduce you to a whole lot of kids that not only know those words, but can explain other words like “propitiation, expiation, sanctification, justification” and those are Biblical words (man didn’t make them up). Those are within the Text itself.

And so I would fundamentally deny that we need to keep our teachings “simple.” This is the Word of God we’re talking about. If he gave it to us, it’s for us to know. And there’s nothing wrong about being intellectual about it. I call the opposite thinking of this “bumper-sticker theology” (if it’s too big to fit in a catchy slogan on a bumper sticker it’s too big). It creates the watered down and (not trying to be mean) basically ignorant Christianity that’s prevalent in modern evangelicalism.

I appreciate you giving me the opportunity to answer these questions, but I’ll say this concerning much of what I’ve seen here and in a few Amazon reviews: If people want others to be nicer, they don’t need to be so mean in the process.

Our own Sergius Martin George left a great comment over at Julie Anne's site.

just noticed that the first book was titled, “Help Mom, there are Arminians Under My Bed.”

It took me a while to realize that, whatever anyone finds offensive — or not — in the title, it is the MOM to whom the child is appealing. Why not the DAD? Isn’t it Fathers who bear ultimate responsibility for the spiritual well-being of the family? So why is MOM being asked for help in fending off the Arminians?

I’ll tell you why: it’s nothing less than a flat-out rebellion against The Creation Order(TM), and I’m not standing for it, JD Hall!!! I’m reporting you to the Baylys and the Dougs this instant, my friend! What kind of Reformed Baptist are you, anyway???!!!

I decided that, instead of launching into a tirade about the obvious problems with the title of this book, we should have a good laugh about it. One of Julie Anne's readers produced this fabulous cartoon. 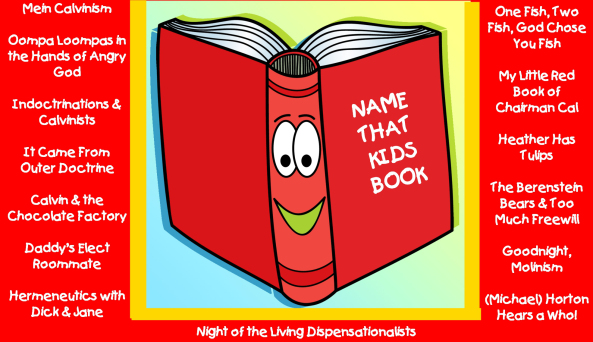 I end this with a question. Will they know we are Christian by our monergism?