When we quarrel with the way the world is, we find that the world has ways of getting back at us. In other words, however we try, the sexual act cannot be made into an egalitarian pleasuring party. A man penetrates, conquers, colonizes, plants. A woman receives, surrenders, accepts. -Doug Wilson 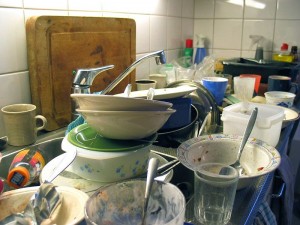 Over at the Reformed Singles website (Motto: Prepared, Prequalified and Predestined- you cannot make this stuff up) Doug Wilson wrote a rather bizarre "advice" post (I am sure it was not a discernment post because he is well reviewed by TGC types or is it? ) titled Not Where She Should Be link. After spewing my coffee all over the table and immediately cleaning it up,  I realized that this post is a great illustration for a discussion that we want to have with heavy reader input.

What is, or is not, a discernment blog?

While doing my dishes this morning, I was mulling over the whole brouhaha regarding "discernment blogs" aka "watchblogging."

Here is where it got totally confusing for me. This is not a diatribe on the person who wrote this post. Instead, I want to figure out what in the world folks, who are associated with certain movements, are talking about because obviously "they" know and "we" do not. These comments link outline why I have a problem.They are in chronological order.

Agreed on all counts, but this is only somewhat helpful unless you name names. Does that include Pyro? Certainly not?Apprising Ministries? Possibly. Peter Lumpkins of the SBC or other crazies? Definitely. I can't comply unless I know who's off limits.

I don't know that we will always find that clear and obvious line we want, which is one of the reasons I did not name names. I agree with you about Pyro, that they do not fit the definition.

So Pyro is good and others are bad? Why is that? Is it based on criticizing doctrine vs behavior? Verifiable fact vs discussion of opinion and experiences? What's the criteria?

So, does the blogger claim that Pyromaniacs does or does not fit the definition of a discernment blog? I am not sure. Some other bloggers are called "crazies" by a reader which apparently is not discernment or is it?  But, the blogger did not disagree with a reader who enthusiastically called him a discernment blogger. Color me stupid while I wipe down my kitchen cabinets. There appears to be a contradiction in terminology going on within just a few comments.

While trying to figure out the ins and outs of "discernment blogging," a blog post, written by RC Sproul Jr, in 2012, is one of the most quoted posts on the subject link. It was commended by James MacDonald as well link. Read that again. Sproul Jr who was defrocked  and whose ministry sued a blogger (we will discuss this on Monday) and James MacDonald who is up to his eyeballs in debt his own controversy link are really put out by bloggers. Oh dear….

So, I continued to clean my kitchen counters while thinking:

Request for our readers

Can you help us determine:

On Monday, Deb will look at RC Sproul and Ligonier Ministries (while insuring that Junior does not try to sue us). On Wednesday we will look once again at Doug Wilson and his discussion with Thabiti Anyabwile on racism and slavery. Then we will discuss, using these posts as examples, the idea of "discernment" blogging. That is where we will use the input from our readers.

We start our exploration with Doug Wilson who is universally admired by many in The Gospel Coalition which probably has something to do with discernment but I won't go there. He has received great reviews on some of his books by the usual book reviewers but book review blogs apparently do not involve discernment, even if they are called discerning…Am I confused or what?

We have both have read a lot about, and by, Doug Wilson and have found a number of things that disturb us. We wrote a few posts about him here, here and here. So, the following post does not seem out of character. We believe it adds one more piece to the puzzle that is called Doug Wilson.

We also believe that it highlights the current controversy over gender expectations and helps to explain why some men and women could feel that the church in America is becoming rather weird.

Doug Wilson and the Dishwasher wife who won't do the dishes.

He starts the conversation about by discussing some practical examples of what construes a woman who is rejecting her husbands "godly authority." At this point, the husband is experiencing "distress."

The symptoms can of course vary. He may be distressed over her spending habits, television viewing habits, weight, rejection of his leadership, laziness in cleaning the house, lack of responsiveness to sexual advances, whatever. But however the problem is manifested, what should a husband do? Suppose for a moment that he really wants to serve God in their marriage, and she appears to be distinctly unenthusiastic about changing. What course should a man pursue?​

learn to do her duty, and to lead her as she learns what is, for her, a difficult lesson.

Now, if the woman is a total loser, he does say to start with just one problem at a time, bless his heart.

She can learn on a representative problem. She would be overwhelmed with a requirement that she change everywhere, all at once. If, for example, the problem is one of poor housekeeping, he should require something very simple, i.e.. that the dishes be done after every meal before anything else is done.

So, he then takes the reader through the "steps" to insure obedience. It sounds a whole lot like Ezzo's "First Time Obedience" but it can't be since that is for a little child or is it?

The first time the dishes are not done, he must sit down with his wife immediately, and gently remind her that this is something which has to be done. At no time may he lose his temper, badger her, call her names, etc.

Step 1 Caveat #1 The husband is the real problem since he didn't whip her into line sooner.

He must constantly remember and confess that she is not the problem, he is. By bringing this gently to her attention, he is not to be primarily pointing to her need to repent; rather, he is exhibiting the fruit of his repentance.

Step 1 Caveat #2 If at first you don't succeed, you have a rebel on your hands!

He does this, without rancour and without an accusative spirit, until she complies or rebels.

I cannot help myself. Can you imagine rebellion being defined as refusing to do the dishes??? ROFLx15 minutes.  OK, back to the topic while mopping my floor to hide all evidence of floor rolling…

Step 2 For the little woman who has learned her lesson, it's on to the next issue. It appears that there could be many, many issues needing intervention.

If she complies, he must move up one step, now requiring that another of her duties be done.

Step 2 For the little woman who continues to rebel, call in the elders! I kid you not.

If she rebels, he must call the elders of the church and ask them for a pastoral visit. When the government of the home has failed to such an extent, and a godly and consistent attempt by the husband to restore the situation has broken down, then the involvement of the elders is fully appropriate.

Seriously, can you see a group of elders sitting in a kitchen, inspecting the dirty dishes??? ROFLx30 minutes! How can I clean while reading this stuff? My dirty kitchen is Wilson's fault. Repent, Doug, repent!

It appears that Wilson cannot begin to imagine all sorts of reasons that might be at the root of this "rebellion." The husband's only problem appears to be tardy rule enforcement.

Years ago, I was in a church which had trouble staffing the nursery, despite numerous appeals. One Sunday, the pastor was not in the pulpit. He had an elder fill in. The congregation was told that the pastor would be helping out in the nursery until it was adequately staffed. I still remember handing over my daughter to him. He was most pleasant and seemed to be enjoying himself. The nursery had all of its shifts filled within the week.

Wilson appears to overlook the idea of sacrificial love and radical servanthood in coming to a true resolution to this situation. Oh yeah, and what's a few dirty dishes in the life of a loving marriage?

Now, what the heck is the classification of this post? Discerning, not discerning, or embarrassing to certain groups of people?