"My advice for Tim Tebow…Take a vow…Avoid SBC churches. Grow your hair long. The pagans in America need your message of Jesus Christ and Him crucified more than we Southern Baptists need you in our temples." 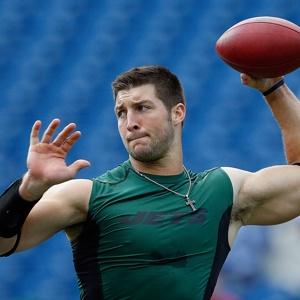 As most of you know, there has been quite a brouhaha involving Tim Tebow, who canceled his speaking engagement at First Baptist Church Dallas.  You remember FBC Dallas, don't you?  The mega mega church that poured over $130 million into its expansion project at the behest of its pastor Robert Jeffress.  When the project was first announced back in 2009, we wrote a post called If We Build It, They Will Come… and quoted Jeffress as saying:

"I think if Jerry Jones can build a $1.3 billion temple to the god of sports out there in Arlington, we can spend a 10th of that, which is what we're doing, $130 million, to build a facility for the glory of the one and only God," Jeffress quipped on KBCI. (This gives new meaning to keeping up with the Joneses)!!!

Well, Tebow ain't comin' and because of that he has been lambasted by high and mighty Christian leaders who claim he 'wimped out'.  Al Mohler, loyal friend of 'don't waste your sports' Mahaney had this to say in Tebow's Big Fumble featured over at Christianity Today.  Mohler wrote:

"The controversy threatened to dominate Tebow's life, so the 25-year-old athlete withdrew, attempting to escape his predicament. Stating that he has wished to "share a message of hope and Christ's unconditional love" with the historic congregation, Tebow said that "due to new information that was brought to my attention" he has decided to cancel the event. He then pledged to use "the platform God has blessed me with to bring Faith, Hope, and Love to all those needing a brighter day"….

If Tebow meant to mollify his critics, it is not likely to work for long. Tebow has identified himself as a vocal evangelical believer. His church roots go deep, and it is safe to say that he has never had a pastor who, though speaking in a different tone, would have disagreed with Jeffress on the exclusivity of Christ and the sinfulness of homosexuality. He has given no indication that he has moved from those convictions, and his closest friends assure that he has not.

…evangelicals should not miss this opportunity to rethink our focus on evangelical celebrities in popular culture, including sports heroes. For now, the controversy is over Tebow's withdrawal from an invitation extended by an historic church. The pastor's statements have been the center of the controversy. Inevitably, the controversy will shift to Tebow's own statement, which he will eventually have to make. There will be no escape.

Has Tim Tebow caved as the 'culture warriors' claim?  It is interesting how Christians who read the same Scriptures can have diametrically opposed viewpoints.  We want to share with you a different perspective presented by a Southern Baptist pastor whom we greatly respect – Wade Burleson.  Thanks Wade for allowing us to feature your post here at TWW.

A couple of years ago I wrote a post about my wife's and my 2009 encounter with Tim Tebow and my growing esteem for Tim as a faithful Christian witness. The post was probably something that many mainstream pastors could have written at the time. Southern Baptist evangelical leaders were driving the Tebow bandwagon in 2009. Not any more. Last week Tebow cancelled a speaking engagement at the First Baptist Church of Dallas, Texas for this coming April. Tim is keeping other speaking engagements in the Dallas area that same week, but he is not going to be speaking at First Baptist. The Internet, Twitter and the blogs have been abuzz about Tim Tebow's withdrawal from his commitment to speak. Though not specifically stating the reason for his decision, Tebow issued the following statement:

"While I was looking forward to sharing a message of hope and Christ's unconditional love with the faithful members of the historic First Baptist Church of Dallas in April, due to new information that has been brought to my attention, I have decided to cancel my upcoming appearance."

Tim Tebow did not share what "new information" he received, but the secular media had been hounding Tebow for agreeing to speak at FBC Dallas, a church that some in the media wrongly accused of being "hateful" and "intolerant" for their views on homosexuality and Islam. Before Tebow cancelled, CBS sports journalist Gregg Doyel wrote an ugly piece entitled Agreeing to Speak at Intolerant Church Is Tim Tebow's Greatest Sin. Doyel slandered FBC Dallas pastor Robert Jeffress when he compared Jeffress to the radical and uncouth Fred Phelps, the pastor of Westboro Baptist, Topeka, Kansas. Sportswriter Gregg Doyel is not writing for a Christian audience, so his words of attack against Robert Jeffress and FBC Dallas should not come as a surprise to Christians.

However, what some SBC evangelicals have said about Tim Tebow since word filtered out that he cancelled his speaking engagment at FBC Dallas is very suprising. According to Tom Rich, one pastor named Jerry Vines tweeted, "The devil laughs when Christians compromise truth." Southern Baptist pastor Jack Graham wrote, "It is very, very sad when Tim Tebow bows to political correctness and cultural decay." Another pastor, Kevin Parnella, tweeted "Being a coward, breaking his word, and turning his back on biblical truth does not make Tim Tebow credible."  For his part, pastor Robert Jeffress implied Tim Tebow "…wimped out." I find it flabbergasting that evangelical leaders who once drove the Tebow bandwagon are now verbally crucifying him.  I'm not sure I could write anything to change the viewpoints of these pastors towards Tim Tebow, but maybe there is something I could write that might encourage Tebow as he moves forward in his desire to share the love of Christ. I am calling it the Cenchrea Solution. 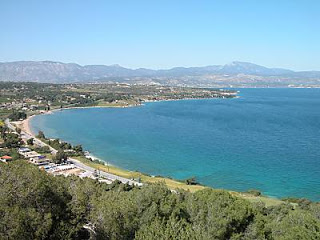 Cenchrea is a sea port on the eastern side of the Isthmus of Corinth, just south of Athens, Greece. Cenchrea's natural harbor (pictured here) flows into the Aegean Sea. It is the harbor where Paul and Priscillia and Aquila, after spending eighteen months in Corinth, boarded a ship to head to Ephesus and then Syria as Paul finished his second missionary journey (Acts 18:18). Cenchrea is mentioned only twice in the Bible. The second occasion is in Romans when the Apostle Paul commends Phoebe, a woman deacon from the church at Cenchrea, to the assembly in Rome (Romans 16:1-2). Phoebe boarded a ship in the port of Cenchrea in A.D. 57 and set sail for Rome in order to deliver Paul's letter to the Romans. Renan wrote, "Phoebe carried under the folds of her robe the whole future of Christian theology."

But Cenchrea is also a signficant seaport because of a statement made in Acts 18:18 regarding Paul: "Paul had his hair cut at Cenchrea because of a vow he had taken." Notice that the verb is in the past tense. Paul "had taken" a vow.

The Jews did not like Paul or his message."The Jews resisted … so Paul shook out his garments and said to them, “Your blood be on your own heads! I am clean. From now on I will only go to the Gentiles." (Acts 18:6) This last sentence reveals the vow that Paul made. He vowed to stop going to the Jewish synagogue in Corinth. For the rest of his time in Corinth Paul vowed he would only share the message of Christ with the pagan Greeks. By the way, the culture of the Corinthian Greeks was corrupt to the nth degree. The society in which they lived really bothered the religious Jews of Corinth. But Paul's mission was to reach people with the good news of Jesus Christ and nothing else. He vowed he would no longer waste his time in the religious synagogue of the Jews. As was customary for Jews when making a vow, Paul began to let his hair grow long. He stopped living with the Jews in Corinth and went to live with a Gentile man named Titius Justus, as told us in Acts 18:7:

"Then Paul left there and went to the house of a man named Titius Justus, a worshiper of God, whose house was next to the synagogue."

Paul stayed with Titius Justus next to the synagogue, but he never again went into the Jewish synagogue in Corinth. He walked the streets of Corinth for at least another year sharing Christ with the pagan Greeks, and he spent Sundays teaching a small but growing Christian assembly. Toward the end of his stay in Corinth, the religious and pious Jews slandered Paul. They tried to press charges against Paul, angry that he was not interested in Jewish customs and traditions and their Jewish laws. How dare this trained Jewish scholar from Tarsus spend his time with the pagan Corinthians! The Jews let Paul know they no longer appreciated him.

It's interesting to note that Paul would later write a letter to the people he had led to Christ in Corinth, and in this letter (I Corinthians), he described what he did during those months he spent among the pagan Greeks in Corinth:

"For I resolved to know nothing among you save Jesus Christ and Him crucified" (I Cor. 2:2).

The cutting off of his hair (see Numbers 6:5) signified the end of the Paul's vow not to speak in the Jewish synagogue. Now notice the next verse:

"They (Paul, Aquila, and Priscilla) came to Ephesus…. Now Paul himself entered the synagogue and reasoned with the Jews" (Acts 18:19).

Paul's vow was over. He cut his hair. He could now go into the Jewish synagogue.

My Advice for Tim Tebow

Tim Tebow, you are a disciple of Jesus Christ who identifies with us Southern Baptists. Your membership is at a Southern Baptist church in Jacksonville, Florida. It seems some of your own people (a few Southern Baptist leaders) want you to focus (with them) on secondary and tertiary issues. They want you to affirm their beliefs in matters that have nothing to do with Jesus Christ and Him crucified. The fact that this is not your calling or your mission makes them no difference. They are upset with you.

I suggest you follow the example of the Apostle Paul.

The pagans in America need your message of Jesus Christ and Him crucified more than we Southern Baptists need you in our temples.