"The Super Bowl attracts tens of thousands of fans to the host city, and millions of television viewers, making it the most watched broadcast each year. But it also attracts a sector of violent, organized criminal activity that operates in plain sight without notice: human sex trafficking."

While New Orleans is preparing for the biggest U.S. sporting event of the year, those who operate human trafficking rings are converging upon the city.  This dirty little secret is at long last getting attention in the press.  As a case in point, The Washington Post featured a story called Sex Trafficking and the Super Bowl.  The article states:

"Human trafficking is defined by the United Nations as the “recruitment, transportation, transfer, harboring or receipt of persons, by means of threat, use of force or other forms of coercion, for the purpose of exploitation.”  Sex trafficking is particularly heinous: Young women are abducted and sold into an underworld network where they are forced to engage in sexual activity for no pay, and from which it is extremely difficult to escape.  There is evidence that human trafficking increases where major sporting events are held."

Exact numbers are hard to come by, as trafficking is an underreported crime, but host cities, law enforcement, and civil society are becoming increasingly more aware of it. They are promoting educational campaigns and strengthening laws against trafficking to send a strong message to traffickers: You are not welcome here. If we find you, you will be prosecuted. There is a message for trafficking victims as well: If we find you, you will not be arrested; you will be rescued."

Christian news outlets are also addressing this tremendous problem that plagues society.   The Christian Post recently featured an article entitled Why is Sex Trafficking at the Super Bowl?

It sheds some light on just how prevalent sex trafficking is at these big events by stating:

"The Super Bowl and other large sporting events like the Olympics and the World Cup are increasingly being recognized as magnets for sex trafficking and child prostitution. The 2010 Super Bowl saw an estimated 10,000 sex workers brought in to Miami, while the 2011 event resulted in 133 prostitution-related arrests."

"A Christian advocacy group against the commercial sex trade and human trafficking has launched a social media campaign to coincide with the millions of people who will be interacting online during this Sunday's Super Bowl in New Orleans.

Shared Hope International says there were 12.2 million Super Bowl related posts on social networking websites during and after the game. "As a matter of fact, the halftime show alone garnered 862,000 comments," officials stated.

The organization said that these types of large numbers related to the game means there is "a chance for us together to get in the game and create awareness for the fight against human trafficking, through online advocacy."

"We're guys who take a pledge and take action. We educate, equip, and empower other men to fight against the sex industry and protect their families," the group states on its website."

Utilizing the social media is an excellent way of getting the word out to masses of people.  Dee and I are also trying to shine the light onto human trafficking.  Late last year Dee wrote about it in a post called  Profession or Obsession?

Wade Burleson has written a thought-provoking post on the Super Bowl, which we have received permission to share with our readers.

Nike Ain't No Shoe: The Super Bowl and the Worship of Sports, Sex, and Stardom (link) 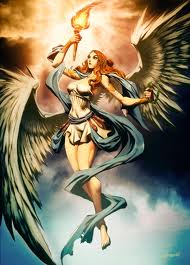 This post needs a one paragraph disclaimer to be properly understood by readers, so here goes.

One of the complaints leveled against me as a pastor and writer is that I'm too free. My grace theology, say some, possesses too much liberty and too little law. I plead guilty. Whether it is loving homosexuals to Christ rather than lambasting them at church, or leading wine collectors to Christ over a glass of wine in their homes, or strongly advocating that institutional churches must change methodologies or die a slow death of traditional irrelevancy, my message is one of Christ's grace and love toward sinners and a repudiation of institutional church authority, control and extra-biblical laws. This Sunday our church will participate in our annual Souper Sunday emphasis where we will share in a fellowship meal after our morning services and take a collection for a new food ministry in our community called Loaves and Fishes.  Several of our small groups will be meeting on Sunday night for Super Bowl parties. We respect churches who have Sunday night corporate worship services, but we do not.

The title of this post might make you think that I am about to write something condemning of those who watch the Super Bowl, those who cancel Sunday night services for Super Bowl parties, or those who purchase Nike goods. I am not. The fact is, one of my favorite cousin's wife is a high level executive of Nike, and the charitable work they do is fantastic. I like the Super Bowl as much as anyone else. This post is simply a caution to all Americans, not just Christians, that not all that glitters around the Super Bowl is gold.

This Sunday is the second annual Pray for the Johns Day.  A "john" is a one who pays for sex. In recent years, those involved in putting a stop to human trafficking have reported that use of children and teenagers prostituted for paid sex has been on the upsurge during athletic contests in America, particularly the Super Bowl. Did you ever think we would come to the place in America where people are encouraged to pray for "johns" on Super Bowl Sunday? Probably not. Yet, there is an axiom about our world that the ancient Romans used: Historia non facet saltum – History makes no leaps. America has not arrived overnight at the place where young girls and boys are being taken to the city which hosts the Super Bowl so that "johns" can pay to have sex with them. The problems in New Orleans this weekend during the Super Bowl are outgrowths of America's decades long fascination with sports, sex, and stardom.

The closest event to compare our modern day Super Bowl with is the ancient Greek Olympics. When most Americans hear the word Olympics, they think of a world-wide athletic competition that the modern Olympics represent. But the modern Olympics didn't begin until 1896. The ancient Olympics began in 776 BC and ended in AD 393.  For centuries, the Olympics were Grecian games, open only to free-born Greeks athletes. Much like the American Super Bowl, the rest of the world paid scant attention to the ancient Olympics. However, Roman Emperor Theodosius the Great decreed in AD 393 that the Olympics should end. Rome had conquered Greece in the second century BC and had adopted Greek culture and language. Yet Emperor Theodosius, most likely a genuine believer in Jesus Christ and not just a politically expedient Christian like Constantine,  thought the Olympics had become a detriment to Greco/Roman culture and civilization. The athletes at the Olympics had become professionals. Those who won their events were granted free food and lodging for life and were admired by all. Theodosius opined that young people knew more about Olympic athletes than they did Socrates, Aristotle, and Plato. Even worse, Theodosius felt that the Olympics had become a playground for sex and worship of the human form. Olympia, the only site where the ancient Olympics were held during their 1170 year existence, was a city dedicated to the gods. The ancient The Greek aphorisms "Know thyself" and "Everything in moderation," had been lost in the collective consciousness of society. People were indulging themselves in all kinds of excess and immorality, and the Olympics had become almost a celebration of that indulgence 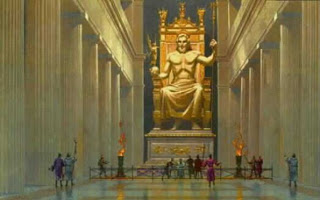 From the start of the Olympic Games until the beginning of the 5th century BC, there were just a few buildings in Olympia, including the Temple of Hera (wife of Zeus) and a crude athletic stadium. However, the Temple of Zeus was built between the years 472-457 BC, and this magnificent structure stood as the centerpiece of Olympia for the remainder of Olympic history. The Temple of Zeus was designed to accommodate the 13-meter-high gold and ivory statue of Zeus, dedicated and placed in the Temple in 435 BC. The Statue of Zeus in Olympia was considered to be one of the Seven Wonders of the Ancient World. It remains to this day one of the largest statues ever raised within an enclosed room. The figure depicted Zeus, seated on a throne, with a scepter in his left hand and Nike (winged victory) in his right hand. Grecians who visited Olympia considered their pilgrimage to Zeus's most sacred locale as a highlight of their year. As time went by, the people would walk out of their religious worship of the philandering and mythical Zeus and live out their sexual fantasies in Olympia as they cheered their athletes to victory.

Sport, sex and stardom. Olympia, Zeus, and Nike. History makes no leaps. This Sunday the Super Bowl is in the Super Dome in New Orleans. Mardi Gras begins the next week in New Orleans. After this Sunday, we will have a new team of American athletic heroes. Our country is very similar to ancient Greece. Our gods just have different names. Before anybody gets too excited about the Super Bowl, remember that in the grand scheme of human existence, measured in millenia (776 BC to AD 2013) or eternity, this weekend's big game amounts to very little. What counts is that we do our a small part to put an end to the exploitation of children and young people in America. Pray for the johns this Sunday, and pray for those in authority who will be arresting those johns.

And keep your eye on the big picture.  Our civilization and our culture, including the Super Bowl, will one day be gone. Only Christ and His Kingdom never end.