A great many of those who 'debunk' traditional…values have in the background values of their own which they believe to be immune from the debunking process. CS Lewis 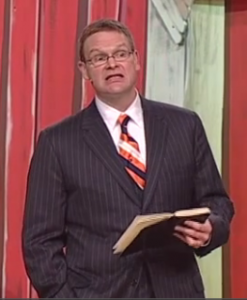 12/13 9:45 AM-There has been a major development on the Pajama Diaries in the last 2 months.  I am not at liberty to tell you more at this time but Tom Rich is putting me in contact with James Duncan. Here is a hint-it appears that Duncan's story is correct and there have been some serious repercussions for NewSpring. I plan to tell you the details as soon as i receive permission.

12/13 update-Special thanks to Nicholas, I have added a post at the end in which Noble calls people jackasses.

Before I begin, I want to assure our readers that you are dearly and deeply loved by the One who created you. If any "cool dude" or "oh-so-serious, theologically correct" pastor tells you anything different, get out and find a fellowship that rejoices in the love, grace and freedom that was gained for us by Jesus.

I guess old Dee is not beyond being shocked. Due to our alert readers, I read something this week that astonished me. Did you know that we have a pastor in the South who is after Mark Driscoll's title as the shock jock of American Christianity? His name is Perry Noble, pastor provocateur of NewSpring Church, coming soon to yet another location in South Carolina.

I learned of Perry Noble from Tom Rich of FBC Jax Watchdog.  Here is a link to an illuminating post on Noble titled Perry Noble to NewSpring Members Who Don't Like the Music: "You Officially Suck as a Human Being." Watch the following is a video, edited by Tom, to see this guy in all of his glory.

In the post, Tom refers to a inactive blog, The Pajama Pages, written by Dr. James Duncan who attended Noble's Newspring. What happened to him is beyond belief. Really, really, really despicable- as bad as Driscoll and worse. Here is a link to this story at that blog called Holy Rage at the Spring.

So that you will go to read the whole sordid story, here is a summery provided by Tom Rich here. It is important to point out that there are far more incidents than this summary provides, including interference which prevented the Duncans from adopting a baby.

"One interesting twist in this story that I'll leave you with, and that you'll see: the anonymity in this case was NOT the blogger, but a man on the church's side, an employee of the church, who went after the blogger anonymously to teach him a lesson to try to get him fired by sending a phony resignation letter to his employer, to paint the blogger as pervert, a homosexual, his kid as a cross dresser, and to make him fear for his family's life by actual threats against him…all in the name of God to punish the blogger for the audacity in criticizing a mega church pastor."

Why anyone in his right mind would continue to attend such a church is beyond me. But, then again, I don't get Mark Driscoll either.  So, when other people quote this man as an authority, it surprises me.

So far, so good. Now, enters a man who purports to "advise" churches on how to do church. He refers to the above list. Shouldn't such a man be able to tell right from wrong? Perhaps "right" means filling the pews with people who are religiously masochistic? The name of his blog is Ministry Best Practices link.  As you will see, he gets pushback from using a Perry Noble quote. This is not unlike the infamous Jared Wilson/Doug Wilson dustup. Just like Jared Wilson presented, in a positive manner, a ridiculous quote by Doug Wilson,  Bill Reichart, this ministry advisor, quotes Noble, to put a positive spin (from the perspective of the pastor) on people who leave the church.

After 21 negative(to say the least) comments about the post, Reichart decided to put a line through the part of the statement that caused the controversy. It is the area in bold.

People leaving your church is a double edged sword.

On one hand it can be a healthy thing. Perry Noble say that because the church is a body, and every good body has a back door (I think you know what I mean here!) – it is important for the church not to be constipated. It can be healthy for a people to leave a church. If they are not aligned to the vision or if they are being contentious, then we should allow them to leave.

Did he really say that people who leave the church are….? Well here is a comment from that post by Shadowspring, whom I am proud to say has commented at TWW from time to time. Smart woman!

Wow, people leaving the church are excrement and good riddance to them? I can't imagine why people might not want to spend their time listening to you….

Now let's take a look at more of the above quoted section of that post.  In the last sentence we read

If they are not aligned to the vision or if they are being contentious, then we should allow them to leave.

Come again? If people are members of a church which calls them "turds" ( I am struggling to be polite here) Reichart/Noble says they need to be allowed to leave!! Good, flaming night!!! What is this. Some sort of holy hall pass? I have news for Reichart, Noble and every other puffed up, egotistical, vulgar, Calvinista or non-Calvinista out there. Anyone who makes the supreme mistake of getting involved in a church with a pastor that resembles anything on the order of a Noble, should make like Joseph and get the heck out of there on the double. They do not need said pastor's,  or anyone else's, "permission" to do so. The fact that these guys think members do shows an underlying unbiblical authoritarianism that is to be avoided at all costs. Besides, by leaving such a church, I think people might find they are in good company. My bet is that Jesus left a long time ago!

Then there is the bad ending to this post. It involves "the exit interview."

When people are in a position and willing to give us honest feedback, we want to take advantage of that opportunity to learn from their departure. Here are some points about the exit interview:

Preston, another commenter at the original post summed it up nicely.

I'll sidestep the obvious problem of equating some who leave with excrement to get at the obvious blunder of calling this a best practice.

Exactly how is it pastoral care, life affirming, or representative of the Body to conduct 5-10 minute, over the phone exit interviews? Are people leaving so constantly that ministerial staff is unable to meet for coffee or visit a home or invite someone to their office in order to sincerely listen to their heart instead of ticking a box? Sure, not everyone will want to meet. Sure, not everyone who leaves needs to stay in that particular church and sometimes the reasons for leaving are differences that are not in-step with orthodox theology or practice. However, an exit interview is a business model, like when you lose a customer. Church members are not customers. The church is not a business.

Honestly, in what Christian worldview does this make even the slightest amount of sense? Exactly how disconnected with the laity are ministers of the Gospel supposed to be?

Ridiculous! This is shameful. A phone call is about as thoughtful as sending an unsubscribe email. The Gospel is an embodied practice. The best practice is to make your body present to another as much as possible.

I know a couple who attended one of my former churches for almost two decades. They were involved in ministry to the youth, led Bible studies, participated in Sunday school and missions. They let some folks know they were leaving. I bumped into them at another church.  They expressed their deep regret that not one person at their former church ever called to see where they were. They said it indicated to them that they were essentially used by their former fellowship. Oh yeah, the lead pastor of that church was an authoritarian, pastor-centric guy, just like Noble. (Noble is not a Calvinist but likes to hang with Driscoll and the Elephant Room guys. Thanks for picking up on this, Nicholas))

Also, just because one has been abused in a church does not mean that their critique is invalid. Recently I heard a Calvinista pastor address those who have been hurt by other churches. He said that it is time to get over being upset and to play ball with his agenda. Let's take a look at what Reichart has to say about his post and the negative reaction to it.

And I have sensed many of the comments have come out of pain from abusive churches and leadership…and that is why I always try to keep my tone filled with love and grace and don't want to merely react – and I don't mind taking "hits" or not given the benefit of the doubt since my confidence and acceptance is found in Christ's acceptance…and I don't mind being corrected or told that I am wrong..since I am wrong more times than you know.

He starts by assuming that the negative commenters have been abused. Even if some of them had, why does that fact have anything to do with the evident problems with his post? This is a technique known as marginalization. "You poor person, you just cannot understand because some pastor whooped you." It is also a way for an insecure person to blow off valid criticism.

Time to take a clue. Calling people "feces" is uncalled for no matter the background of the people who object. It is rude and vulgar, just like Perry Noble.This calls into question why Reichart would even quote from such a man. Since he is a ministry expert, we must assume that he has investigated him and believes he is a good role model.

Finally,  I have had enough with beating around the bush. What ever happened to "I was wrong. I am sorry?" Instead we are treated to  a lecture on why the author, not being given the benefit of the doubt (you bad Christians), is confident in Jesus. You see, he had all the right intentions. But how does any sane person give another the benefit of the doubt when they are told that they are akin to poop and are just constipating the church. Try as I might, I can find no way to put a positive spin on that one. It was a mega-fail. He needs to give it up and apologize.

I leave our readers with this. You are precious. Jesus paid a stunningly high price for you. You are deeply loved. As CS Lewis said so beautifully:

“'You come of the Lord Adam and the Lady Eve,' said Aslan. And that is both honor enough to erect the head of the poorest beggar, and shame enough to bow the shoulders of the greatest emperor on earth. Be content.'”

We leave you with this video. Noble says he doesn't care about you!  Ask yourself, "Do you feel the love?"